St. Patrick tossed the snakes, so it’s time to celebrate! 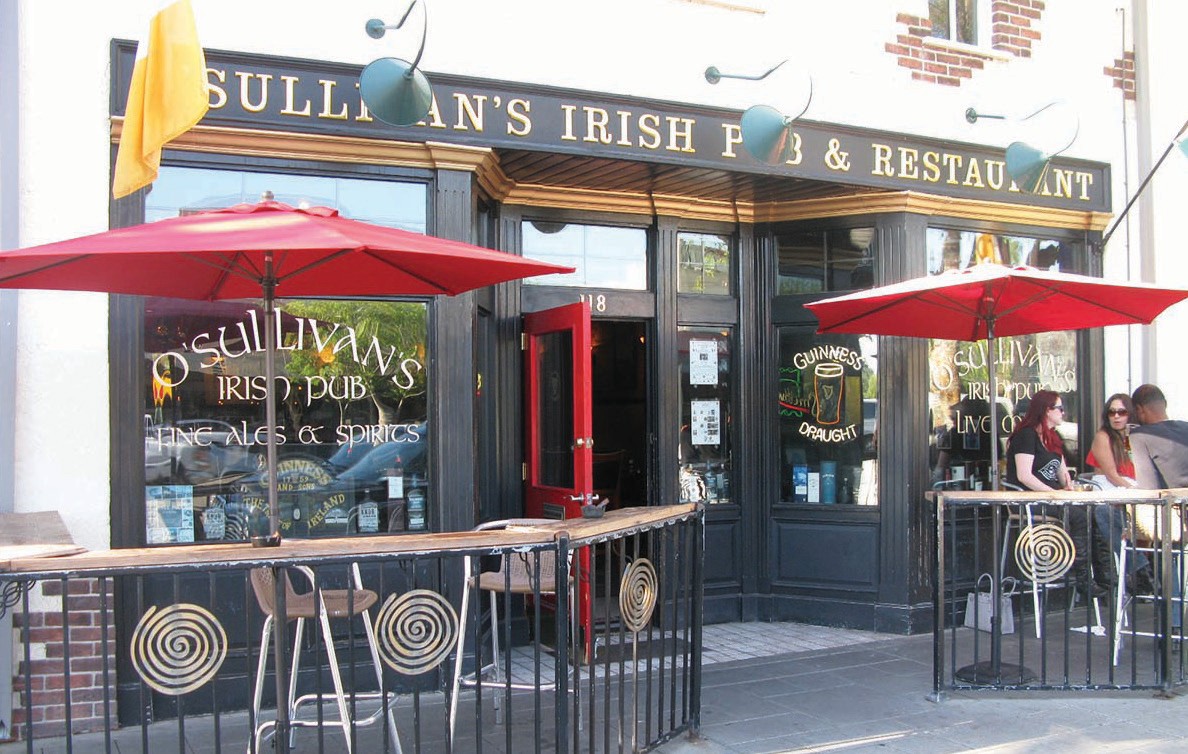 O’Sullivan’s Pub and Restaurant on Grand Avenue will be filled with revelers and lines of waiting customers will be running down the block, according to knowledgeable bartenders. “It will be all hands on deck,” said one of them.

According to Thomas Cahill’s seminal book, “How the Irish Saved Civilization” the patron saint of Ire­land was born in Wales in the early fifth century, about the time the Ro­man Empire was coming apart.

He probably spoke the Welsh form of Celtic and Latin too, Britannia having been a Roman colony for centuries. He was captured by Irish pirates at the age of 16 and taken to Northern Ireland, where he was en­slaved.

He was of the Roman Catholic faith and had studied the language of the church and he must have had deep thoughts working as a shepherd on the chilly hills of Eire.

He received a vision from god, telling him that he should return to Britannia. He escaped and managed to talk his way onto an Irish vessel, a curious thing made of staves and rawhide.

The sailors liked the boy and took him on board, offering him their hairy breasts to be licked, as was the custom. The boat missed the British isle and ended up somewhere on the Continent. The starving sailors and the prayerful young man went inland to find food. The sailors chided the boy, “Well Christian, let’s see what you can do.”

Patrick prayed and brought about his first miracle, a herd of wild pigs was hunted down and the boys cel­ebrated with a feast. They made it to what is now England and Patrick found his way home to his family in Wales.

He threw himself into studies for 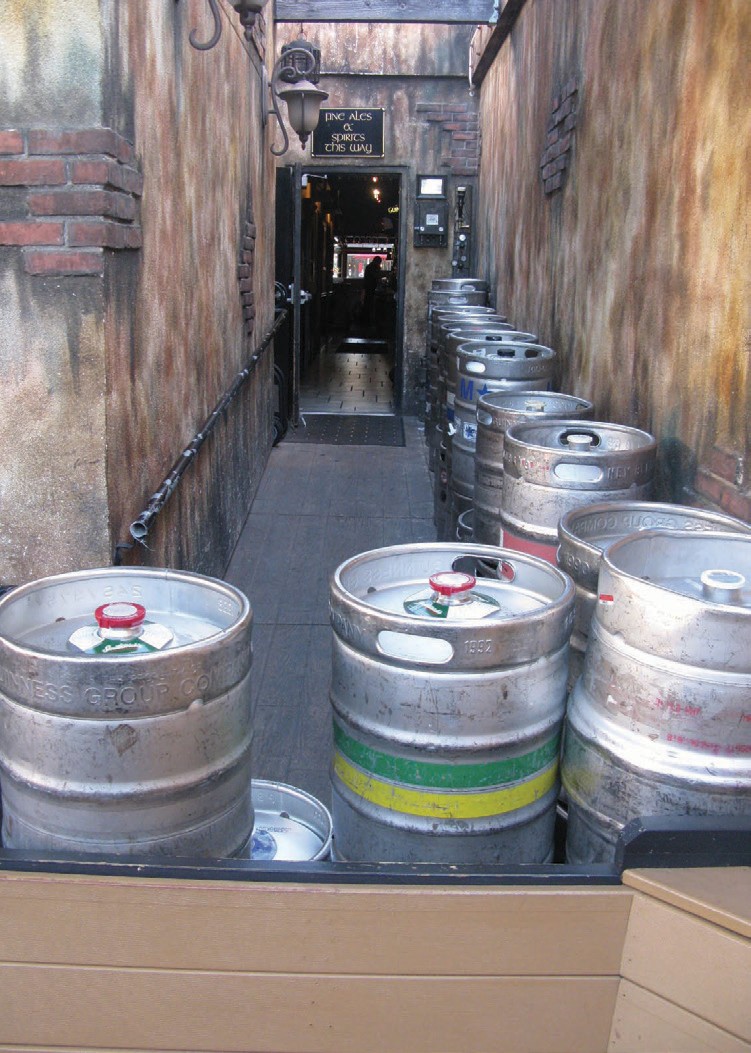 Kegs of beer line the entrance to O’Sullivan’s Pub and Restaurant, which stocks a wide variety of brews both bottled and on tap, plus Irish and Scotch whiskies.

the priesthood and eventually re­ceived permission from the church to return to Ireland. There he faced the wild pagans, who were impressed by his fearlessness and piety.

He baptized them in droves and the Irish returned the favor by establish­ing monasteries in Ireland and across the seas on the continent. The word- loving Irish reveled in the ancient texts of our civilization, the works of the Greek poets and philosophers, the Romans’ histories, satires, plays and biographies. Irish monks copied the books that are the bones of western culture.

So what does this have to do with St. Patrick’s Day in Escondido, Cali­fornia?

But here follows a guide to cel­ebrating the saint’s day of the man who drove the snakes out of Ireland, which whiskey occasionally restores in hallucinatory form.

St. Patrick’s Day is a three-day event at O’Sullivan’s and it has to be the most popular venue for St. Pat­rick’s Day celebrations, by far. The pub at 118 E. Grand Ave. has a great ambience.

According to bartender Jennifer Anichowski, the pub will be standing room only with lines to get in going down the block.

“It’s going to be all hands on deck” Anichowski said. The pub makes more money on Paddy’s day than it does on New Year’s Eve, she added.

She said the pub’s popular house band, Highland Ways, will play from 1 to 5 p.m. and 7 to 11 p.m. on the holiday. Tavern Rogues, will perform from 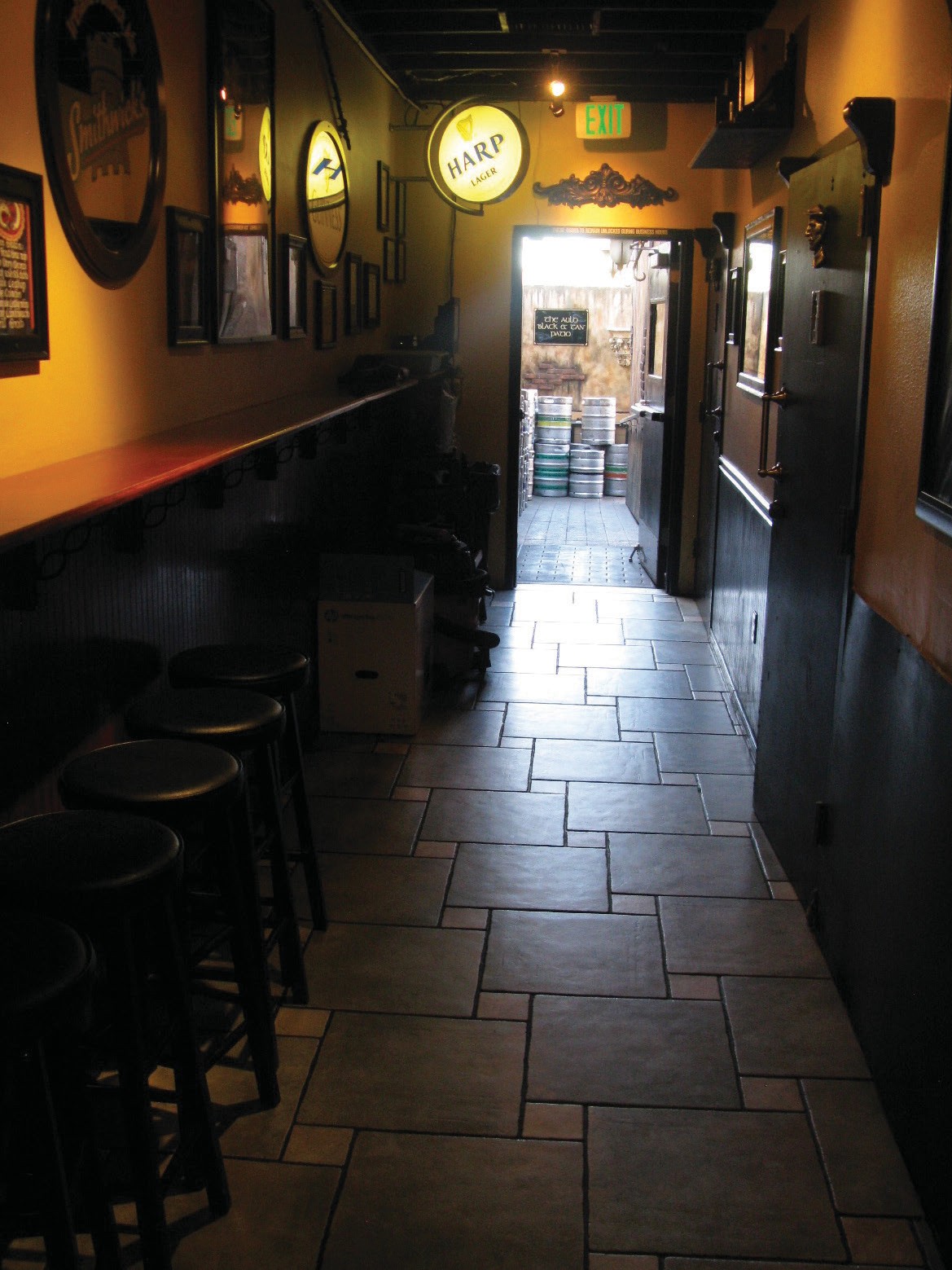 O’Sullivan’s wood-panel walls and atmosphere, including with signs of­fering Harp Lager give the saloon a nice ambience.

9 p.m. until closing on Friday. Leroy performs on Sunday from 9 p.m. to closing.

The bar has Guinness, Harp and a wide selection of 14 different beers on tap. Also, Bushmills, Jamesons and Tullamore Dew plus 19 single malt scotches, and 18 Irish whis­kies.

The restaurant serves a variety of American-style appetizers, from fish tacos to large sliced onion rings and Irish stuff such as bangers (sau­sage) infused with Guinness stout.

There will be a $5 cover charge on the three days and starting at 4 p.m. all patrons must be 21 years or older.

On Tap at Offbeat will be

Offbeat is located in the Harmo­ny Grove area at 1223 Pacific Oaks Place, Suite 101. 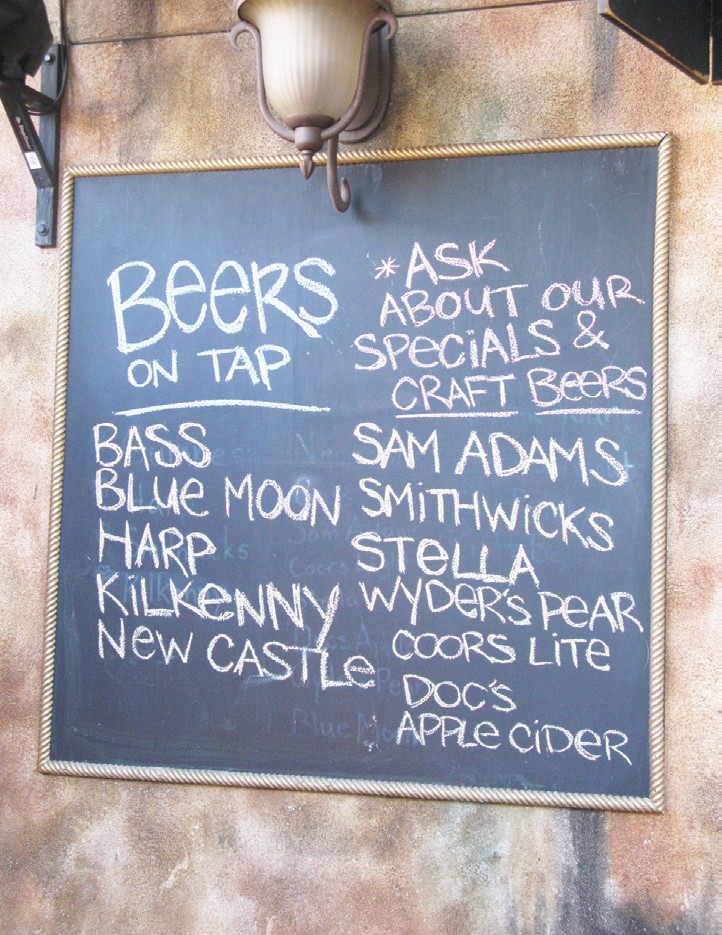 RIGHT: A sign lists the many variet­ies of beers at O’Sullivan’s Pub and Restaurant in The Auld Black and Tan Patio in the rear of the establishment.

Shea Webster will perform a re­laxing afternoon of free live music on the Orfila Terrace.

Bernardo’s will be open from 10 a.m. to 6 p.m. on St Patrick’s Day. Wine tasting is $12 per person and comes with 5 tastes and a compli­mentary chocolate pairing.

Known for hearty pub food such as bangers and mash and burgers with a wide range of toppings, this restaurant is a great place to cel­ebrate St. Patrick’s Day.

Churchill’s has an enormous beer selection, including Newcastle on tap.

Irish Pipers will be playing fes­tive tunes all the day long.