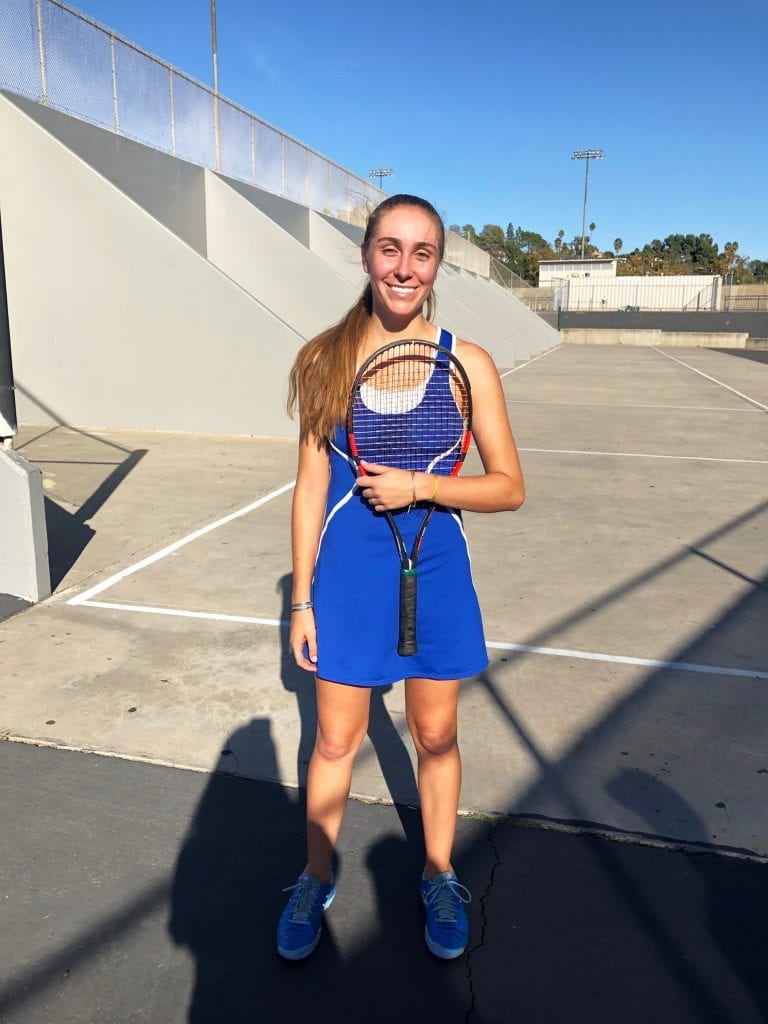 San Pasqual’s Acacia Denton was nothing short of outstanding during her run to the Valley League singles title. Photo courtesy of Shannon Denton.

In a match that was worthy of the occasion, Golden Eagle lefthander Acacia Denton outworked Valley Center’s Isabel Stehly in the singles final of the Valley League Individual Girls’ Tennis Tournament held last Thursday afternoon on the courts at San Pasqual High.

Denton’s winning margin of 6-4, 6-2 was reflective of her composed style, genuine athleticism and an ability to produce winners when given the chance. Denton’s steady serving and forceful groundstrokes, particularly off the forehand side, were also key elements to her notable victory.

Having entered the tournament as the No. 1 seed, there was undeniable pressure on Denton to demonstrate that she was the best in the field but her stellar and often dominating performance throughout three-days of competition more than validated her standing. In fact, before running into the resourceful Stehly, Denton had literally been perfect, rolling over three opponents by a stunning combined total of 36 games to 0.

As for Stehly (the No. 3 seed), her efforts in round two and the quarterfinals nearly equaled those of Denton as VC’s multisport senior dispatched a pair of foes in straight sets while dropping just a solitary game. Moreover, Isabel had scored a huge victory in the semis when she took out Fallbrook’s top player and second-seed Alexa Guadarrama by a 6-4, 6-1 count.

The Denton/Stehly confrontation proved to be an interesting and entertaining affair. Their showdown was highlighted by a number of lengthy rallies, good court coverage by both girls, a nice variety of shotmaking and a willingness on the part of each player to be patient and not force matters. In the end, it simply boiled down to the fact that Denton was just a bit better when it came to the crucial points.

The first set had been a see-saw affair with neither girl gaining much of an advantage. Late in the going it was still tied at 4 all with the outcome still very much in doubt. But that’s when Acacia seized control with a rollover forehand that gave her an edge in games. And it wasn’t long after that she authored a deep, high-bouncing lob that Stehly just couldn’t handle. Now at set point, the two engaged in another long, tactical exchange that only ended when Stehly pushed a forehand wide, enabling Denton to capture a hard-earned 6-4 victory.

In set number two, Denton opened with a hold thanks in large part to a ripped forehand winner down the line. But Stehly countered with a nicely-touched drop shot and an emphatic overhead to square the score at 1-1.

Now generating even more discernible pace off the left wing, Denton blasted another unreturnable shot that had her up once again. And when she broke the VC standout with a penetrating low forehand, her margin had grown to 3-1.

However, for one of the very few times in the match, Denton got somewhat loose with her strokes and drilled a couple of long balls that gave Stehly a much-needed break. It was at this time during the changeover that Jaguar coach Seth Leichtfuss took to the court to confer with his charge and offer some suggestions.

And yet even the wisest of counsel doesn’t guarantee that the tide will turn, especially when the player on the other side of the net is as clutch as Denton. On perhaps the most defining point of the match at 30-30, the SP star angled a deft touch shot to go up 40-30 before wrapping up the game with a lasered forehand that Stehly barely touched. The count now read 4-2 and one sensed that Denton might be closing in on the title.

A superb lob by Denton helped her garner the next game as well and when a short time later Stehly overcooked a forehand that carried too far, the set at 6-2 and the match were deservedly in Denton’s possession.

It had been a fine performance by an unflappable champion who had stayed collected and exhibited genuine focus throughout. Though her groundstrokes off both sides were her bread and butter, Denton also displayed a number of effective topspin lobs to go along with a knack for getting to Stehly’s short shots and then being able to do something with them. And not to be lost in her victory was a remarkable consistency and steadiness that allowed her to continually keep the ball in play. “She’s a very good defensive player too,” said Leichtfuss. “And she’s got really good balance out there on the court.”

As or Stehly, she had honored herself with the dogged way in which she hung in there and competed. And on numerous occasions during the course of extended rallies, she was matching Denton shot for shot. At so many junctures there was very little to choose between these two gifted players. And to be truthful, the final score was not an accurate reflection of the closeness of the match. Had just a few critical points flipped, the outcome might very well have been up for grabs.

What makes Stehly’s effort even more amazing is the knowledge that she rarely practiced with her tennis team. Because Isabel is also a member of the Jaguar volleyball squad, she basically was participating in nothing but games involving the two sports. Leichtfuss firmly believes that Stehly could have climbed to even greater heights had she concentrated solely on tennis. “I wonder about that myself,” admits Isabel.

When asked about her performance in the final, Stehly was far from downcast. “For me, things started off very well in the first set with all those long rallies that we had,” Isabel related. “But she is really good and won the big points when she needed to.”

And that in a nutshell explains why Denton, a splendid player with a multiplicity of skills, had brought home the title. She had met the moments of decision with supreme equanimity and then conquered them.