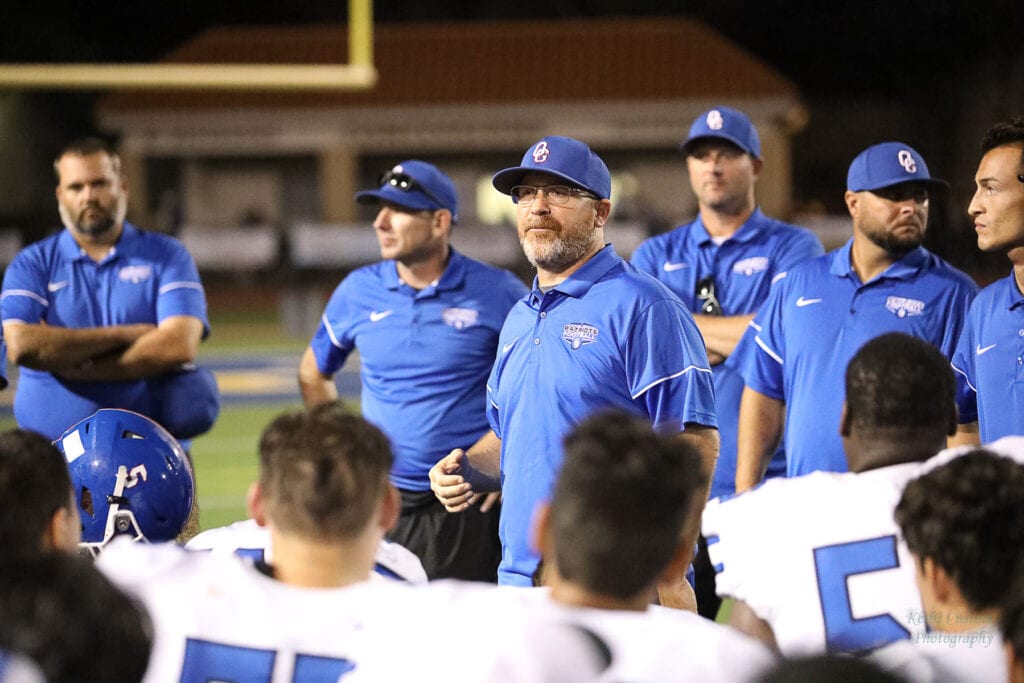 Athletic Director Jason Patterson, shown here after a Patriots football game, has been pleased so far with the rollout of sports at Orange Glen High School. Photo by Lenny Kerbs

At Orange Glen High,  like other prep schools throughout Escondido, a limited number of sports have slowly emerged from the oppressive grip of COVID-19.

As this is being written, cross country, golf (boys and girls) track and field and tennis (both genders) have initiated practice sessions with actual matches and competitions versus other schools expected to start in early to mid-March.
Referring to the aforementioned sports, Patriot athletic director Jason Patterson says their rollout has gone extremely well and that a genuine sense of joy, anticipation and yes relief, has come with their return,

“So far things have gone fantastic,” said Patterson. “The kids and the coaches are doing a great job of following the necessary protocols and there is a real excitement about getting back and eventually being able to compete again.   And I don’t think it’s an exaggeration to say that this has been a real positive as it relates to the mental health of our athletes.”

Because the coronavirus remains an omnipresent consideration, Patterson explains that temperature checks, making hand sanitizer readily available, maintaining proper social distancing, masking when necessary and equipment wipe downs—along with other measures— have been enacted to ensure the safety of the participants. And so far, things appear to have come off without a hitch. “Thankfully, we haven’t had any hiccups,” said Patterson.

And even more positive news came down last Friday when it was revealed that state officials and the California Department of Health in conjunction with a temporary restraining order issued by San Diego Superior Court Judge Earl Maas have paved the way for other OG outdoor sports like football, soccer, baseball, softball and water polo to commence as early as late this week if certain health-related criteria are met.

In particular, that announcement had to come as music to the ears of Patterson since he is also the Patriots head gridiron coach. It was universally acknowledged that if football didn’t get the green light to proceed by March 1, there wouldn’t be sufficient time to adequately prepare for even an abbreviated season. As of now, the best guesstimate has the Pats playing a five or six-game schedule with the season concluding somewhere between the middle and end of April.

In the expectation that football would eventually reboot, the Patriots have tried to stay as ready as possible by engaging in two-hour workouts twice a week. It must be stressed that these sessions, which place an emphasis on conditioning, have been devoid of contact and involve strict adherence to all required safety precautions.
Such items as throwing, route running and individual drills geared towards improving technique on both sides of the ball have been incorporated in these modified practices. “The attitude of the kids has been great,” said Patterson, “and they’ve been really consistent in showing up for these workouts. So we’ll be reasonably prepared to hit the ground running when things do get started.”

To date, the sports restart at Orange Glen has, by any measure, gone very much according to plan. And that’s not only a huge positive but a real cause for optimism. Meanwhile, Patterson is crossing his fingers that in the days and weeks ahead, the same can be said of those endeavors poised to get underway, including the high-profile sport that is nearest to his heart.