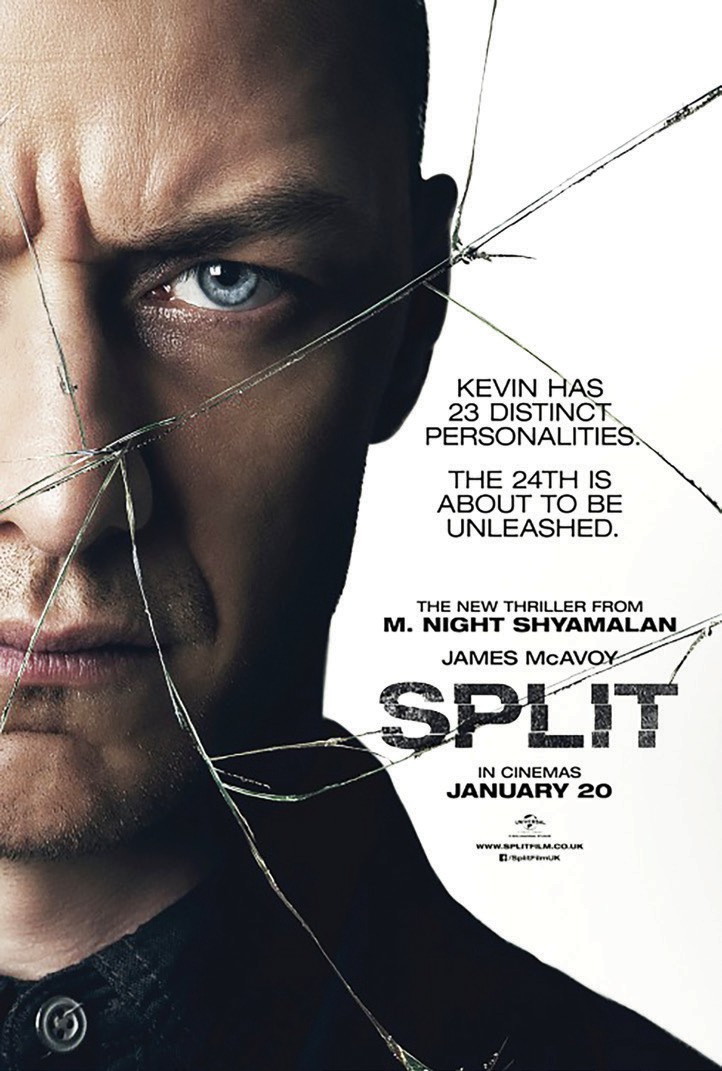 “Split” is a movie that could have easily gone very wrong. Thrillers about people with psychological conditions like amnesia, autism, or in this case multiple personalities tend to be clumsy, with the films rarely having any interesting ideas outside of the conditions. It’s also directed by M. Night Shyamalan, a filmmaker synonymous with awkward pauses, absurd dialogue, and ludicrous twist endings. Perhaps most worrisome is that it’s opening in January, which for a scary movie generally means that the studio didn’t think it could compete at Halloween. But the movie greatly benefits from these lowered expectations, because even though it has some noticeable flaws, the fact that it does anything right comes across like a major triumph.

At the center of the movie is Kevin (James McAvoy), a man with 23 personalities and counting. He sees a counselor (Betty Buckley) once a week as Barry, a friendly fashion designer. But other personalities aren’t so friendly. Like Dennis, a perverted OCD germaphobe. Dennis kidnaps three girls (Haley Lu Richardson, Jessica Sula, Anya Taylor-Joy) and locks them in a room where they are to be used as “food” for a 24th personality. Does he mean literal food? The girls don’t want to stick around long enough to find out, but they can’t escape or overpower Dennis, so they have to manipulate the other personalities into either letting them go or making a mistake that allows them to escape.

At least, that’s what they think they need to do. I personally think they take overpowering off the table way too easily. The girls would have a 3-on-1 advantage (yes, regardless of the personalities), they’d have the element of surprise, and they might not be fighting a strong personality like Dennis. And even if they do get one of the stronger ones, James McAvoy is not exactly an imposing physical specimen (outside of obviously computer-generated body chemistry alterations for the 24th personality). The girls could take him if they coordinate the attack.

But no, the Taylor-Joy character convinces the other two that they need to play along and work with the personalities, not against them. And we’re supposed to side with her because she’s the “smart,” “patient,” “strategic” one and the other two are panicky and dumb. It’s a bad strategy, it’s doesn’t get them anywhere, and it’s just an excuse for the girls to interact with Kevin so McAvoy can chew some scenery as the various personalities.

The good news is that it’s highly enjoyable to see the other personalities. McAvoy nails the performance(s), especially as mischievous 9-yearold Hedwig, who adds some much-needed highly-uncomfortable comedy to the film. He’s also fun as the prim-and-proper Patricia, whose idea of deviation is paprika in a sandwich. I could have done without bookworm Orwell (we get it, you’re smart, could you please go two seconds without an obscure historical reference), but he’s not in it for very long. This is a movie that revolves around one actor, and McAvoy was definitely the right man for the job.

“Split” works when it’s an actor’s showcase for James McAvoy, but not so much as a kidnapping thriller. The psychologist character isn’t compelling, the decisions by the victims are inexplicable, and the difference-maker at the end has a weird bad-things-will-pay-off-later karma to it that’s like an even more rotten version of the infamous ending to “Signs” (not the water-aversion bit, thankfully). Then there’s the twist at the very end, which plays less like a Shyamalan twist and more like a something out of the MCU. It’s better than the average January movie and way better than the average post- “Signs” Shyamalan movie, just otherwise it’s just an average movie.

“Split” is rated PG-13 for disturbing thematic content and behavior, violence and some language. Its running time is 117 minutes.