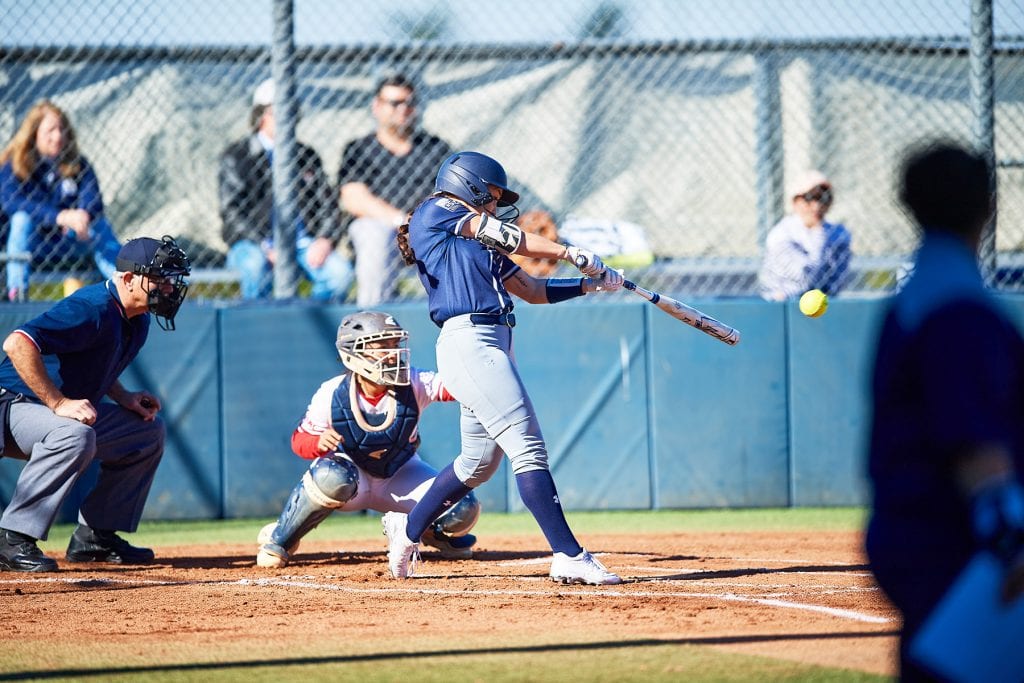 Senior outfielder Lauren Harrison has been one of the lifelines on Menlo College Softball’s extremely potent offense over the past four seasons.  Harrison’s ability to hit for contact, hit for power, as well as her speed on the base paths has made her one of the most feared offensive threats in the Golden State Athletic Conference.  The Escondido native was a stellar all-around student-athlete, raking in the accolades on both the academic and athletic fronts.

Harrison made her way to Menlo from the San Diego Area in the Fall of 2016, and through hard work shown in preseason, earned the starting left field role by opening day.  The choice to start a freshman Lauren Harrison paid off for the Oaks, as she went on to hit .370 with 15 runs driven in, 13 stolen bases and an .890 OPS over 45 games.  Harrison’s big freshman campaign helped lead the Oaks to their winningest season in program history, as she became the first ever Menlo College Softball Freshman to be named to the All-GSAC Team.

Despite the brilliant freshman campaign, Harrison worked hard in her sophomore off-season, to develop a power swing, and on 4/14 of her sophomore season, launched her first collegiate long ball against San Diego Christian, a game played at her old high school field (San Pasqual HS).  She would launch another just four days later, this time in an upset road victory against sixth ranked Hope International, and would finish up her sophomore season with an OPS of .895.  Another year, another milestone for Harrison, as she would smash every one of her previous season bests including hits (55), runs (44), doubles (8), home runs (3), RBIs (16), stolen bases (21), batting average (.401), slugging percentage (.569), on-base percentage (.491), OPS (1.060), and outfield assists (7).

Entering her senior season, Harrison was one of four four-year seniors expected to lead on and off the field, and she did just that.  On the field, Harrison led the Golden State Athletic Conference with a .486 batting average.  The next closest player was nearly 70 points behind her.  Harrison also led the conference in runs scored and on base percentage.  Behind her stellar play and leadership, the Oaks got off to their hottest start in program history in 2020 with a 15-9 record, including three wins against top 10 opponents.  For her stellar Spring Season, Harrison was awarded Menlo College’s Spring Sport Female Athlete of the Year.  She will leave Menlo ranking in the top 10 all time in eight different statistical categories, including being the All-Time leader in triples and runs scored.

Off the field, Harrison was a stellar student in her time at Menlo College, accumulating a solid career GPA of 3.8 as a Marketing Major.  She was inducted into the Beta Gamma Sigma and Alpha Chi National Honor Societies and spent every semester of her time at Menlo on the Dean’s List.  She was also awarded the prestigious Menlo College Richard F. O’Brien Award in 2017, an award given to the highest achieving student in each graduating class.

About her time at Menlo College, Harrison has said: “Playing for Menlo is an experience I will hold close to my heart for the rest of my life. Being at Menlo allowed me to meet amazing people on campus, get a great education, all while playing in one of the most competitive conferences in the NAIA. Menlo softball truly embodies the idea of ‘Ohana’ and I am glad I was able to experience all that entailed. I learned what it meant to be a strong athlete and an even stronger woman throughout my time here. Some words of advice I have for future Oaks is to never let anyone outwork you. Time moves faster than we think so give your best day in and day out. Be the best student, the best athlete, and the best teammate you can possibly be. Lastly, cherish every moment you have with this school and softball program. It was truly an honor to wear the Menlo name across my chest for the past four years.”

Although Harrison’s athletic prowess and high academic achievements will be missed, her legacy will be forever left at Menlo College.