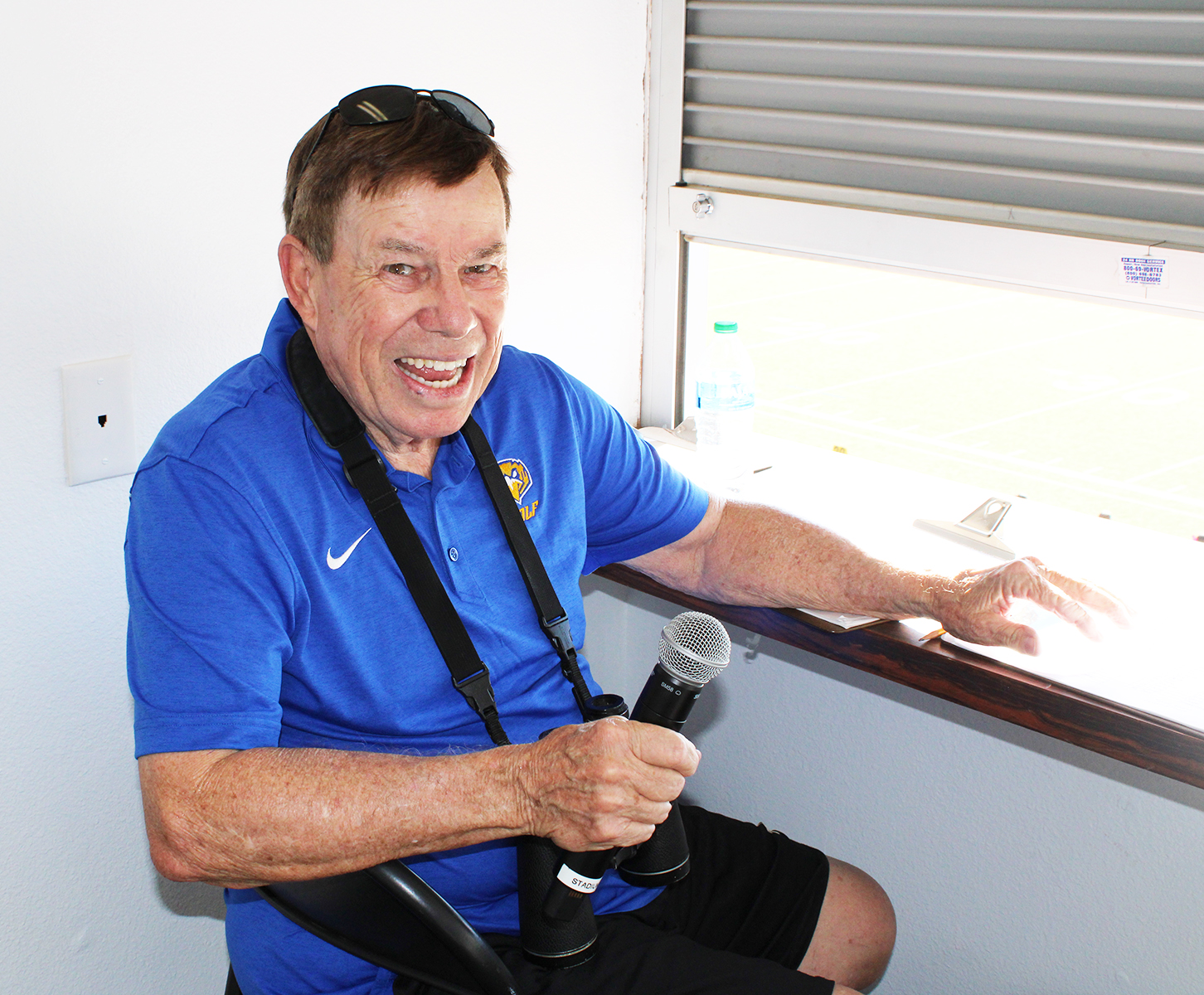 Mike “Casey” Basalo is celebrating 50 years announcing San Pasqual High football games this school year. Although he retired as a counselor from the school in 2004 and moved to Arizona in 2005, he has only missed announcing three home games since the school opened in September of 1972.

For the last 16 years, Basalo has made the weekly trek from Goodyear, Arizona to the Golden Eagles stadium during football season every Friday, driving 350 miles each way. He announces the JV and Varsity football games, staying at the Motel 6 in Escondido and driving an Enterprise Rent-A-Car each time. If the car he rents has a CD player, he’ll listen to music, otherwise it’s mostly sports radio.

Sometimes, his wife of 32 years, Norilyn, will accompany him, but usually Basalo makes the trip alone.

“I love announcing,” Basalo said. “That’s the only reason I do it. Obviously, I’m not getting paid for it and I’ll keep doing it as long as I still enjoy it and I’m healthy. We’ll see where it goes.”

Over the course of his career, Basalo taught World Geography, US History, Driver’s Training, and even took a sabbatical for a year to obtain a master’s degree in Counseling from Point Loma Nazarene University, before becoming a counselor in the early 80s. Throughout the years, he coached high school baseball, softball, and girls’ basketball at San Pasqual.

In his spare time, Basalo traveled to different countries for 23 years as an international basketball referee with several USA Basketball National Teams. In 1992, he was able to referee the five-game series between the College All Stars and the “Dream Team,” which included Coach Chuck Daly and superstars Larry Bird, Magic Johnson, Karl Malone, and Michael Jordan, who were preparing for the Barcelona Olympics.

“The best game I ever had was in 1977 – the US versus the (then) USSR at the Los Angeles Sports Arena,” said Basalo. “It was fun because of the atmosphere. The fans were chanting ‘USA’ the whole game. I got the game ball. Nobody ever came to get it, so I just took it home.”

Basalo also served as an official basketball scorer for the 1984 and 1996 Olympics.

“I tried to get Michael Jordan’s jersey after the 1984 Gold Medal game in Los Angeles, but I wasn’t able to. Instead, I got Chris Mullin’s jersey and pants. He was a college student at the time, so I gave him $50 for his uniform. He was number 13, which I love. That’s my lucky number.”

“I went to Helix even though I was supposed to go to Crawford,” he said. I wasn’t a superstar athlete so nobody cared enough to check my address. I was a baseball player, never a basketball player, but basketball took me all over the world.”

He worked with the San Diego Park and Recreation Department while in high school, first picking up trash at La Jolla Shores but moving on to work at multiple recreation centers. He credits great mentors like Bill Whittaker and Hal Mitrovich who took him under his wing and helped him over the course of his career.

His love of sports led him to be an umpire in the professional baseball minor leagues for three years. And besides announcing for the San Pasqual football teams, he still announces for CIF football, baseball, and basketball games.

The most fun memories Basalo has of high school football are the CIF championship games the Eagles have been a part of, noting that 1997 is the only time the team has won CIF outright.

“Every game is like a mini vacation for me,” Basalo said. “I’m an Eagle at heart forever.”