SP soccer looks to add to its lustrous soccer legacy

You only have to watch the San Pasqual High soccer team in practice to realize they’re something special. There is the nifty footwork, the crisp and precise passing, the determined commitment and the notable communication among the players.

There is also an air about them. They exude a perceptible confidence. It is a confidence born of achievement and a realization that they are quite capable of making some history.

Thus far, the 2018-19 campaign has been a memorable one for the Golden Eagles. During the just concluded regular season, SP racked up an impressive 16-4-2 record and finished with a flurry, losing only one of their last ten contests (8-1-1.)

And as a result of those splendid results, SP not only captured a coveted Valley League title but perhaps even more impressively, it is currently ranked as the No. 2 team in all of San Diego County. Moreover, the G. Eagles will enter the Division I CIF playoffs as the top seed. Their first playoff game will come this Friday night in a quarterfinal matchup with Rancho Bernardo.

Not only are the G. Eagles blessed with an array of talented players but they are also led by an accomplished coach in John Burson, now in his 13th season at the helm. Burson is a legendary figure when it comes to the SP program. Once a highly decorated center-mid who was a major cog for a CIF champion, he has pushed the G. Eagles to even more glory in his current role, orchestrating four trips to the Sectional finals while securing more two titles. An engaged coach who is totally hands-on, he is a compelling figure with his on-field instruction. Being around Burson is like being given a soccer tutorial each and every day. And obviously his players have heeded his lessons.

Entering this season, Burson was hopeful that his team could add to the storied legacy of the often high-flying Golden Eagles. They have done that in spades. “The guys haven’t shied away from the high expectations,” says Burson. “They’ve really worked hard and put in a lot of time and effort. For sure, this is one of the better teams that I’ve had.”

What has made SP a dynamo thus far is that it is blessed with conspicuous strengths. Creative, versatile, great at possession, speedy and armed with as many as nine players who are considered legitimate scoring threats, the G. Eagles can come at you in any number of ways. At times, they can be overwhelming.

And their across-the-board talent is undeniable. 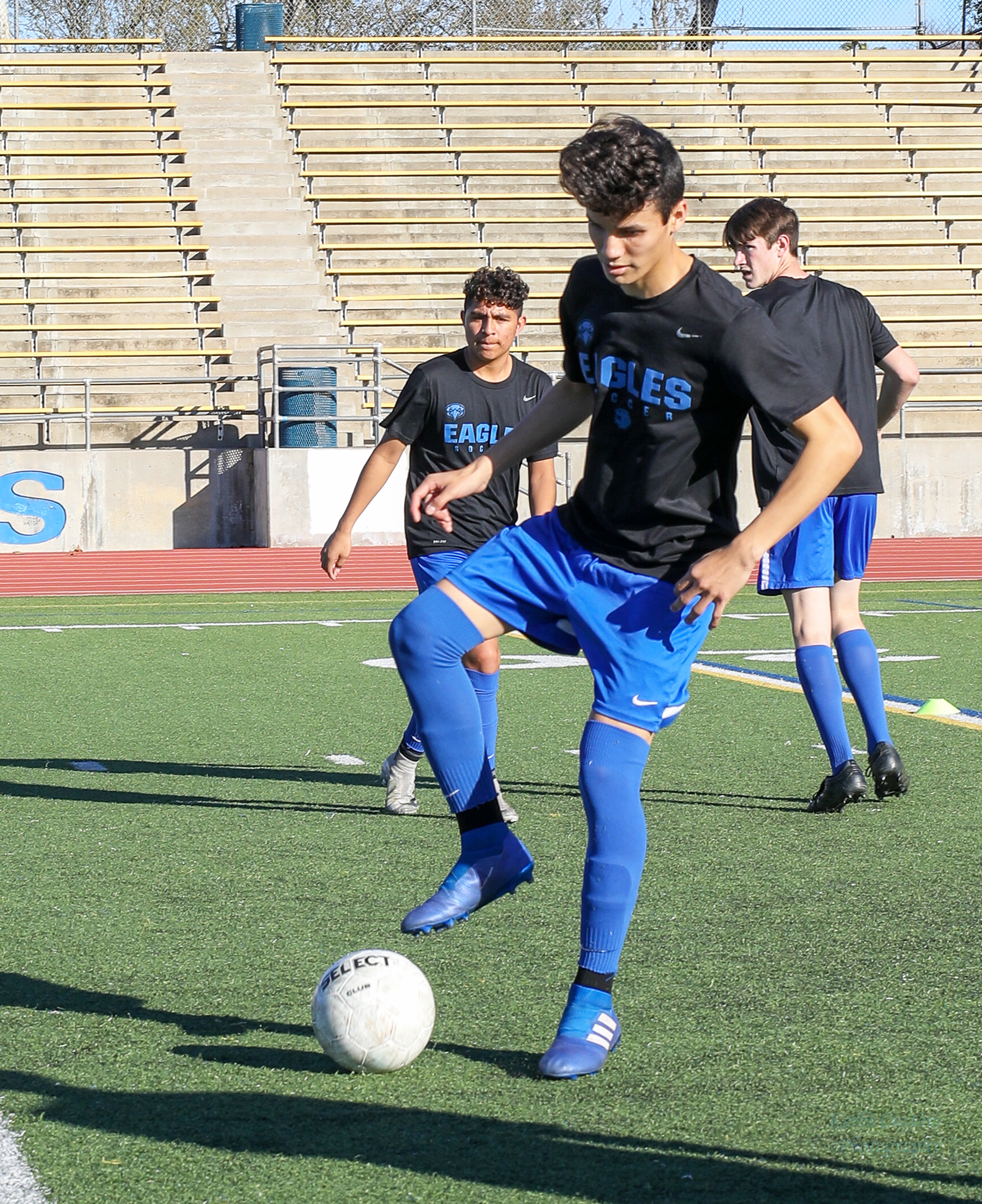 The G. Eagles worked on fine-tuning their footwork, dribbling and passing during a Monday workout in preparation of their upcoming playoff game with Rancho Bernardo. Photo by Lenny Kerbs

In freshman goalie Tanner Wrzeski, who seized the starting job with a standout performance in a tournament in Oceanside, they have a backstop who’s technically sound, has good size, owns nimble footwork and shows off a quick pair of hands.

Robbie Jeffers is an outside back who displays both leadership and character. Well versed at positioning, Jeffers is very effective with both feet and shows an extensive passing range.

Captain Andy Valencia Garzon is exceptionally athletic, fast and always seems ready to go. Ranking at the very top in team goals and assists, Garzon is clearly a focal point of the SP attack. His deft footwork is one of his main assets.

When it comes to be able to do a multitude of things, that’s where you’ll find the versatile Sebastian Tellez Pina. A jack-of-all-trades, he never fails to deliver no matter what role Burson requests of him. “He always does a great job,” lauds Burson.

Though Jesus Mejia makes most of his bones toiling in the back, he can do it all as is evidenced by his ability to play the center-mid position. Because of his keen passing acumen, Mejia has been assigned the key task of taking SP’s free kicks. Also a vocal sort, Mejia certainly qualifies as a commanding presence on the field.

About to collect his second straight VL Player of the Year award, not to mention CIF honors, Ramiro Rodriguez is a point-producing machine. Very creative on the attack, he can also use his physicality to ward off defenders. A clever and instinctive player, Rodriguez pairs with Garzon to give the G. Eagles an awesome one-two punch on the offensive end.

Beyond his years, Cesar Caro works effectively on both sides of the ball. A quiet leader, Caro is not afraid to hunker down and do the dirty work. An all-around performer, this junior contributes in a myriad of ways. 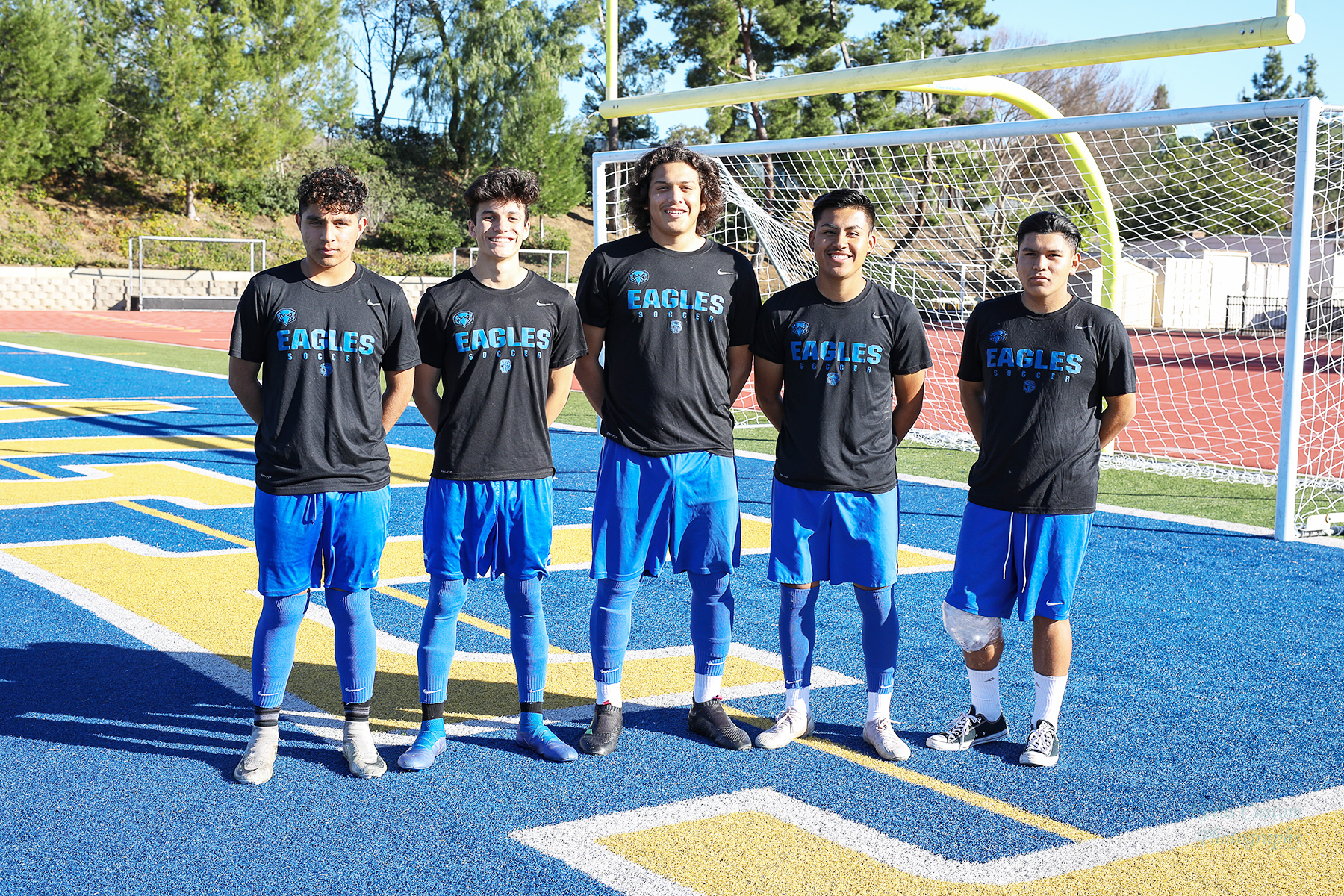 These five standout seniors have been instrumental in making San Pasqual one of the elite teams in the County. From the left are Sebastian Tellez Pina, Robbie Jeffers, Ramiro Rodriguez, Andy Valencia Garzon and Jesus Mejia. Photo by Lenny Kerbs

The hard-working David Guzman is a defensively oriented center-mid who’s also capable of creating offensively.  Able to cover an expansive amount of real estate,  Guzman is a master at making a tackle and has a propensity for cleaning things up whenever required.

Finally, there’s the tall Liam O’Callaghan who has been a big-time addition to the team. A superior defender, O’Callaghan reads angles extremely well and is quite good on the ball. His impact has been undeniable.

So from their enviable personnel to a coach who certainly knows his business, these Golden Eagles appear to have all the prerequisites necessary for chasing down a postseason crown. “If we play to our strengths,” says Burson, “I believe we can do well and be a test for any team we may face.” But then he wisely adds a cautionary note. “We must be mindful and respectful of our competition because in Division I, anyone is capable of beating anybody on a given day.”

And so a gauntlet lies in front of the skilled G. Eagles. They certainly have the firepower and wherewithal to negotiate it. Should they do so, they will take their rightful place among the elite in school history. They’re already special. The question is can they go beyond that and make for themselves an even more lasting legacy?      .