SP soars, Esco has its moments at the Valley League (track) Finals 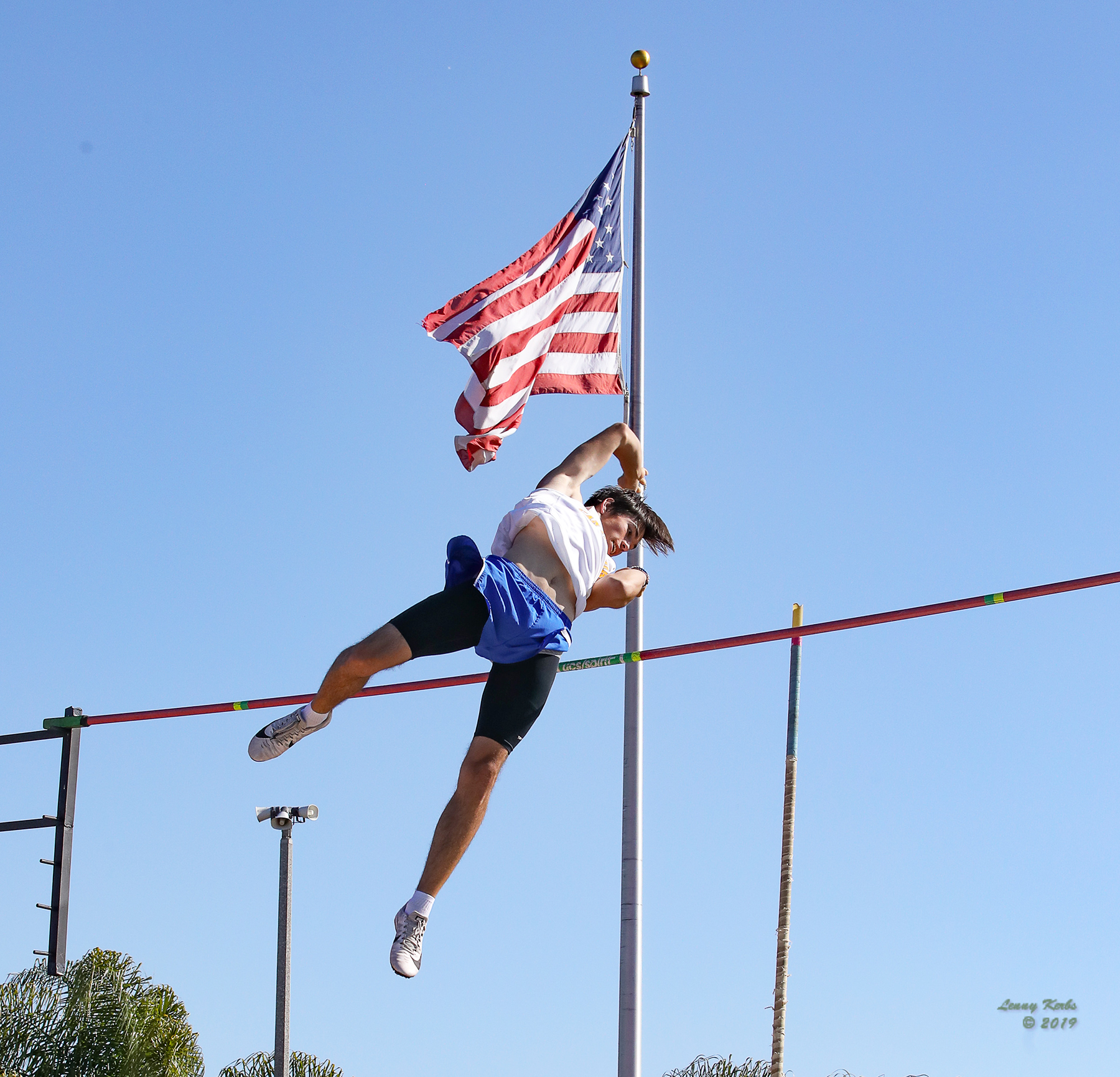 If you didn’t know better, it looks like SP pole vaulter Amadeo Gonzalez used the flagpole to get himself airborne. Gonzalez went on to win the event. Photos by Lenny Kerbs

As far as the San Pasqual Golden Eagles were concerned, it was a most productive afternoon/evening last Friday at the Valley League Finals held up on “The Hill” at Valley Center High School.

The G. Eagles had a number of strong performances across the board that involved both their men’s and women’s squads.

In regards to nearby neighbor Escondido High, though its results certainly weren’t of the same magnitude, the Cougars nonetheless had some moments to treasure during the course of this highly respected competition.

This year the VLF featured six schools including the aforementioned SP and Esco in addition to Fallbrook, Mission Vista, Ramona, San Pasqual and Valley Center. The top four finishers in each individual event earned a trip to the podium as well as a prized medal.

Let’s take a look at the performances turned in by those Escondido-based prepsters who represented their respective schools in a most impressive fashion.

When it came to making the biggest impact for the Cougars on the men’s side, that honor clearly fell to muscle man Lance DeSorbo. The 6’3” senior dominated the discus event with a mighty toss of 133-00 that was nearly 15 feet farther than his nearest competitor. DeSorbo also shone in the shot put where he established a personal record of 46-00.50 that earned for him a runner-up spot.

Notable second-place finishes were also garnered by a pair of other seniors. Sprinter Joel Prewett sped to a personal best of 22.73a in the 200 meters while gutsy David Bonds also hit a high watermark with a 1:59.07a clocking in the 800 meters.

And when it came to sheer tenacity, stamina and determination, Raymond Ramos took a backseat to no one. Not only did Ramos finish third in the 1600 meters but he then followed that up with another fine effort in the grueling 3200 meters where he also registered a third-place showing.

One other Cougar acquitting himself with distinction was Sage Ukrainetz, who produced a seasonal best time of 17.11a that netted him the third-place spot in 110m hurdles.

As for the Esco women, a pair of fourth-place finishes were a high point. Junior Ambar Bolan flung the discus a personal record of 98-05 while Kailx McGuire established a season best with her leap of 4-06.00 in the high jump.

Meanwhile, the SP men were making hay on a number of fronts. Sophomore Quinn Carter was a revelation as he followed up his runner-up finish in the long jump by stretching out to 41-11.50 in the triple that copped first place and proved to be his best mark of the season. 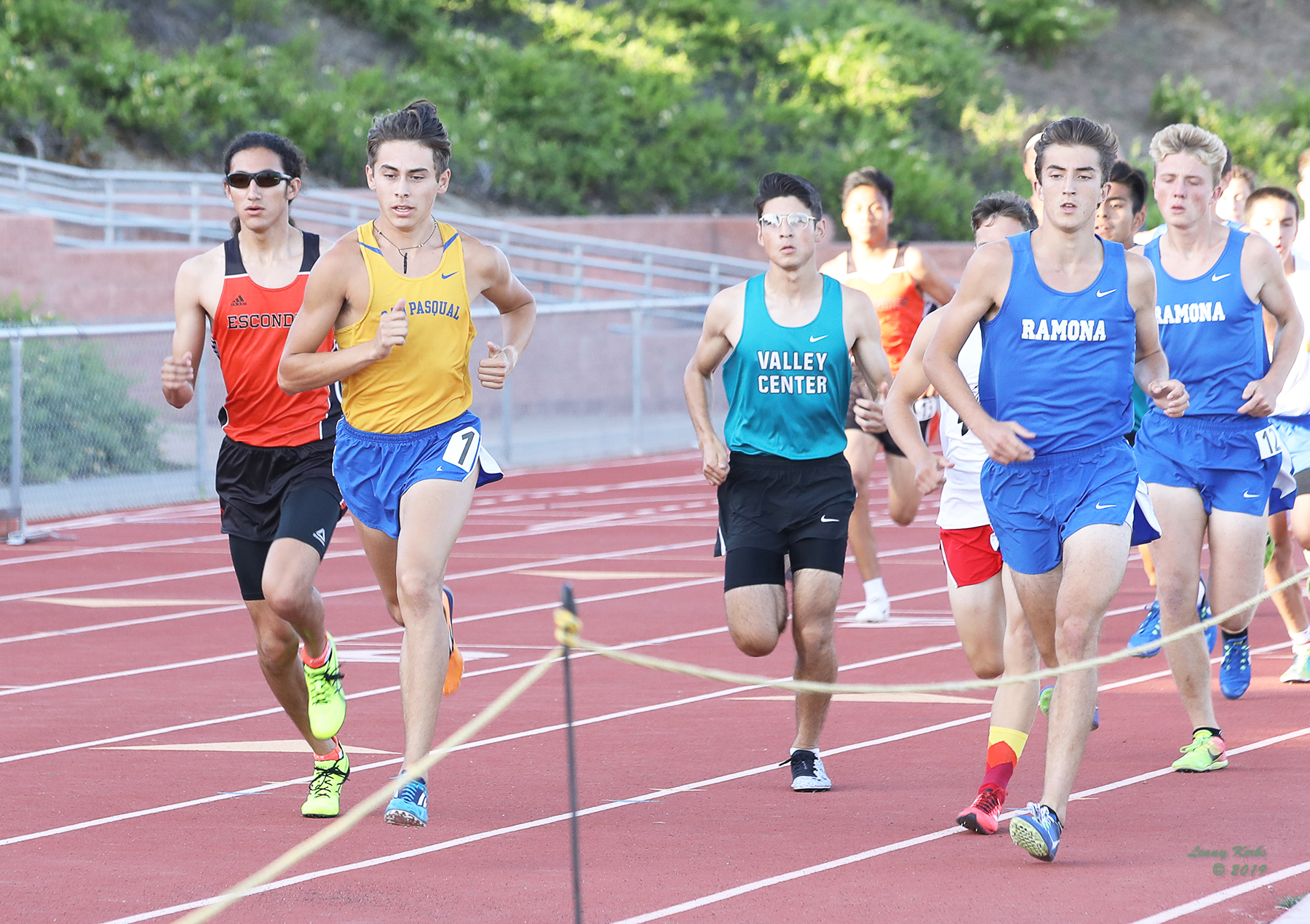 But hard as it was to believe, senior Amadeo Gonzalez went Carter one better by capturing two field events. The flying Gonzalez spent enough time in the air to secure both the high jump and  pole vault titles.

In the 400 meters, Kodiak Ketcham was a bear of a competitor as he quickly jumped out to a lead and simply put on the afterburners, putting away the field with a seasonal best time of 50.07a.

In a many splendored season that has seen him remain unbeaten in races at three different disciplines, the spectacular Noah Tellez-Velazquez kept his mojo intact with an efficient effort in the 800 meters. After getting out to an early advantage, the gifted senior settled in, got a bit of a push from the pack and then turned it on, his arms and legs churning in perfect unison, his stride fluid and rhythmic. Once he hit the final turn, NTV showed a conspicuous kick and won going away in a time of 1:58.09a. Look for an in-depth story on this splendid and insightful runner in next week’s Times-Advocate.

The other G. Eagle taking home top honors was distance man deluxe Mathis Wouters who was steady throughout his victory in the 3200 meters while fending off teammate Franky Varela. Editor’s note: See a separate story on Wouters and his $20,000 scholarship on page 10.

SP was also unrivaled in the 4×400 relay with the combination of Justus Whitaker, Ketcham, Justin Hernandez and Tellez-Velazquez proving to be too difficult to overcome. 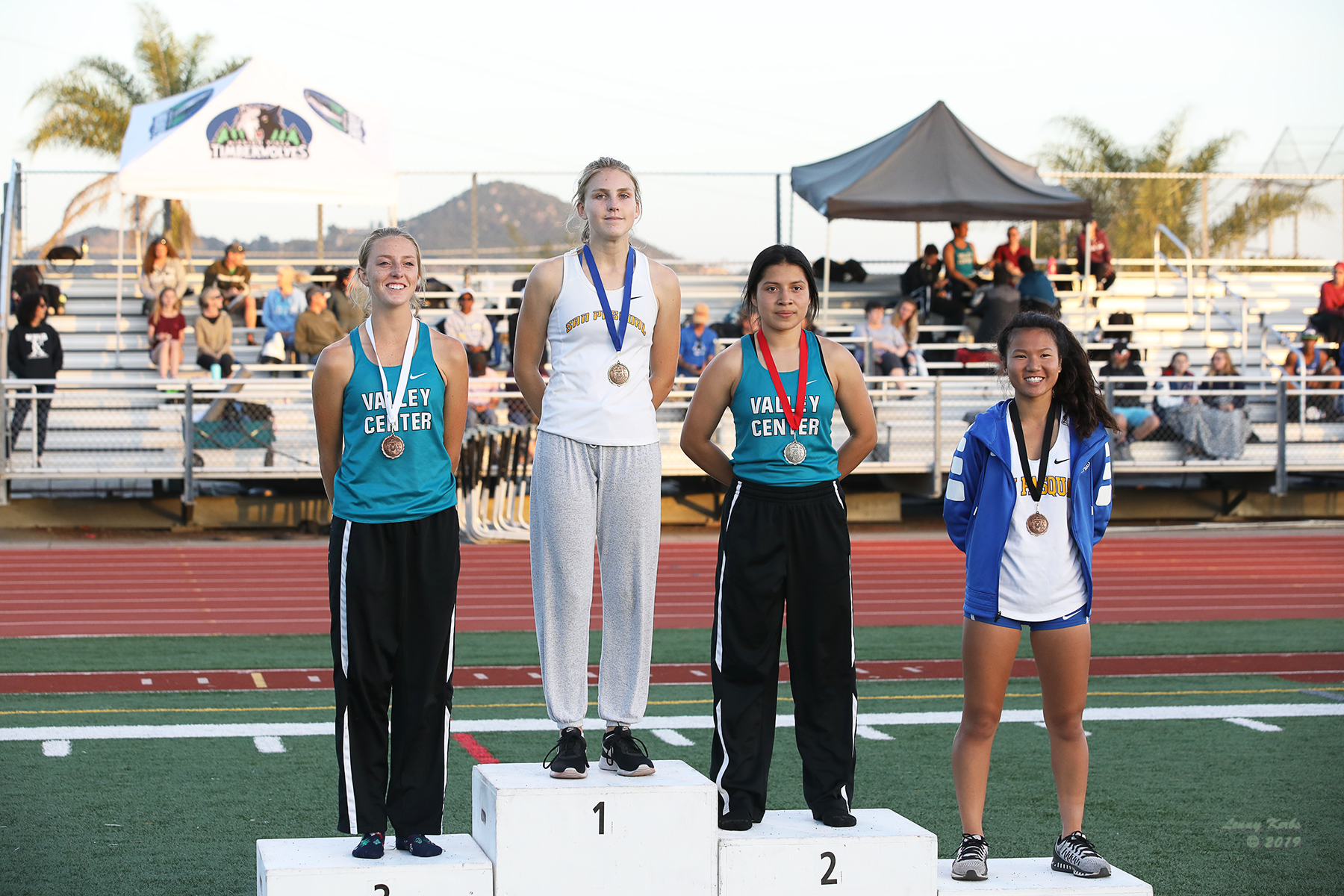 This was a common sight at the VLF last Friday with G. Eagle standout Elise Miller standing atop the podium after a first-place finish.

The Golden Eagles also greatly benefitted from a quartet of second-place finishes that came from freshman Oskari Rantamaki in the 100m hurdles, Whitaker in the 300m hurdles, senior Andres Munoz in the 1600 meters and Sam Cavassa in the pole vault.

On the women’s side of the ledger, stellar soph Elise Miller was nothing short of amazing while racking up wins in three individual disciplines. There was a victory in the 100m hurdles, a personal record of 18-10.50 set in the long jump and a dominant effort in the triple in which she outdistanced her closest foe by better than four feet. And hold onto to your hat; because Miller was by no means done.

Joining forces with teammates Lauren Leisten, Raegan Beckham and Rasha Badrani, Miller added the capper to her marvelous Friday by running the anchor leg of SP’s successful foray in the 4×400 relay.

Personable speedster Makell Edwards was another headliner for SP, taking care of business with a nifty 46.82a clocking in the 300m hurdles after putting her feet to very good use with a runner-up finish in the 100 meters.

And in the pole vault, senior Camila Sanudo-Thomas was the lone aerialist able to soar over the  11-foot mark which ensured a well-deserved victory.

Finally, the notable achievements of the junior sprinter Beckham must be recognized. In both the 200 and 400 meters, Beckham posted personal bests in both those endeavors which resulted in a pair of second-place efforts.

For those Esco and SP tracksters that have qualified, this Saturday’s upcoming CIF Prelims await. Do well there and a coveted spot in the prestigious CIF Finals can be realized a week later. 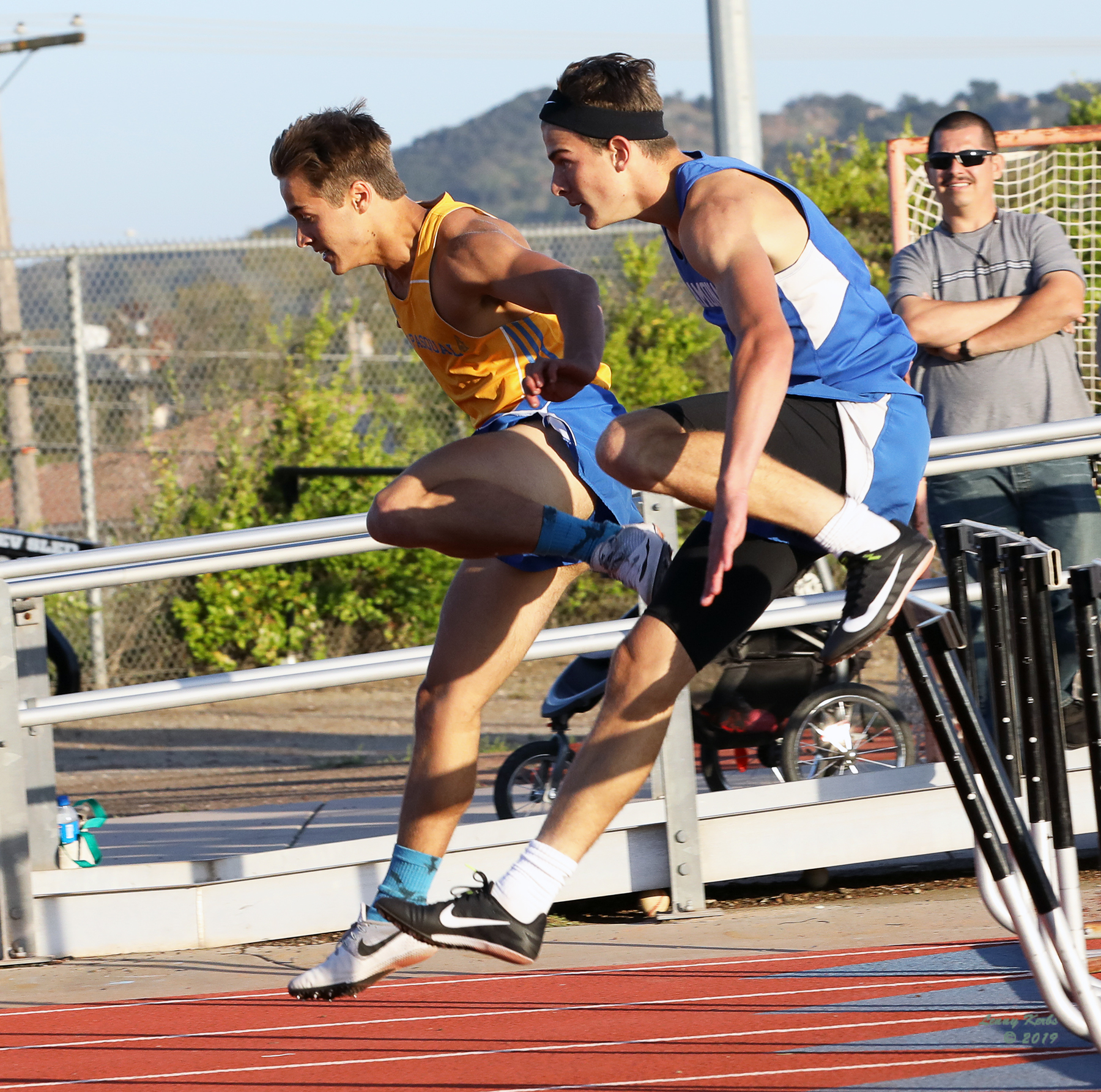 Though he gamely tried to hold on, Golden Eagle Justus Whitaker (in yellow) was overtaken by Ramona’s fast closing Jonathan Nelson in the 300m hurdles. 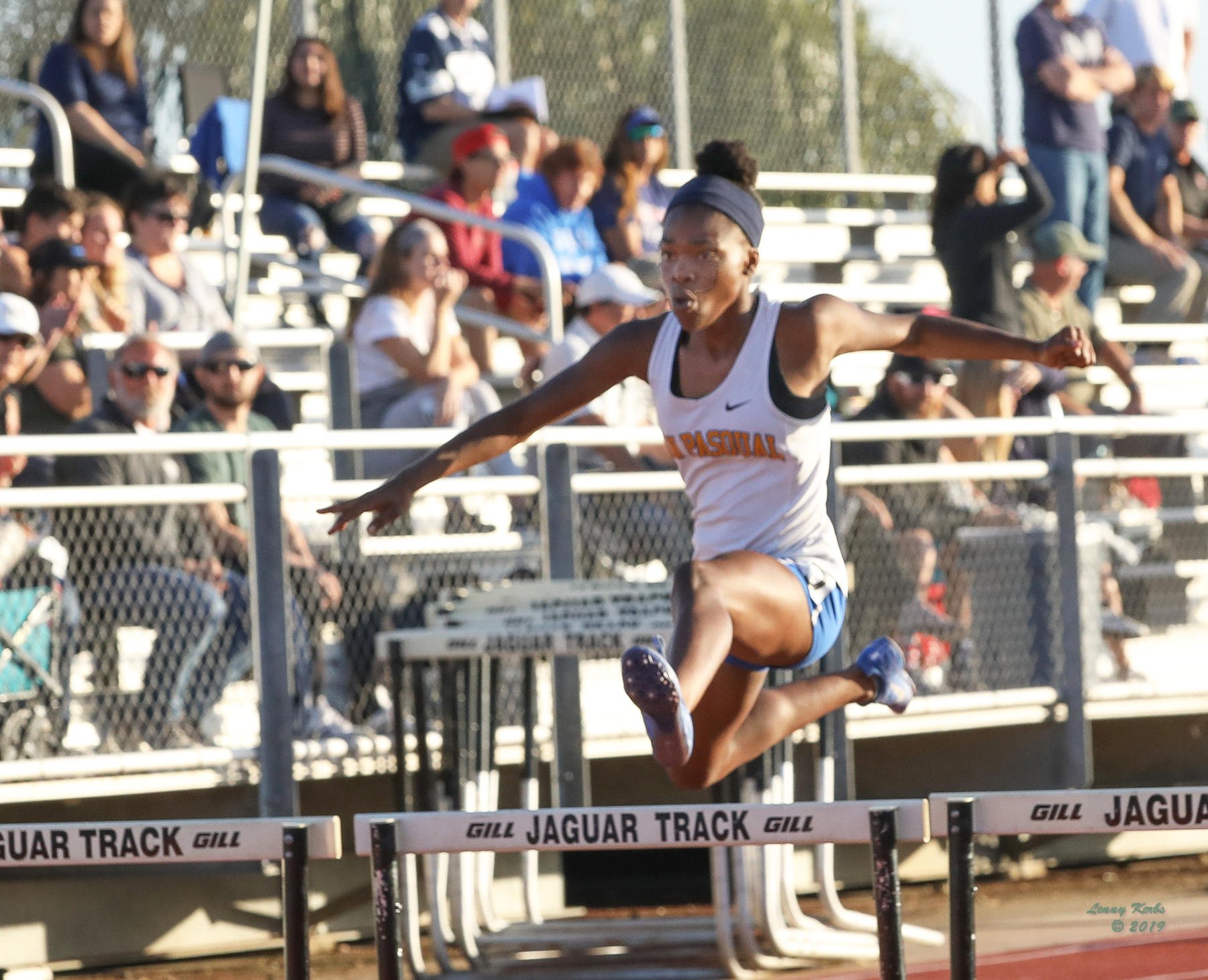