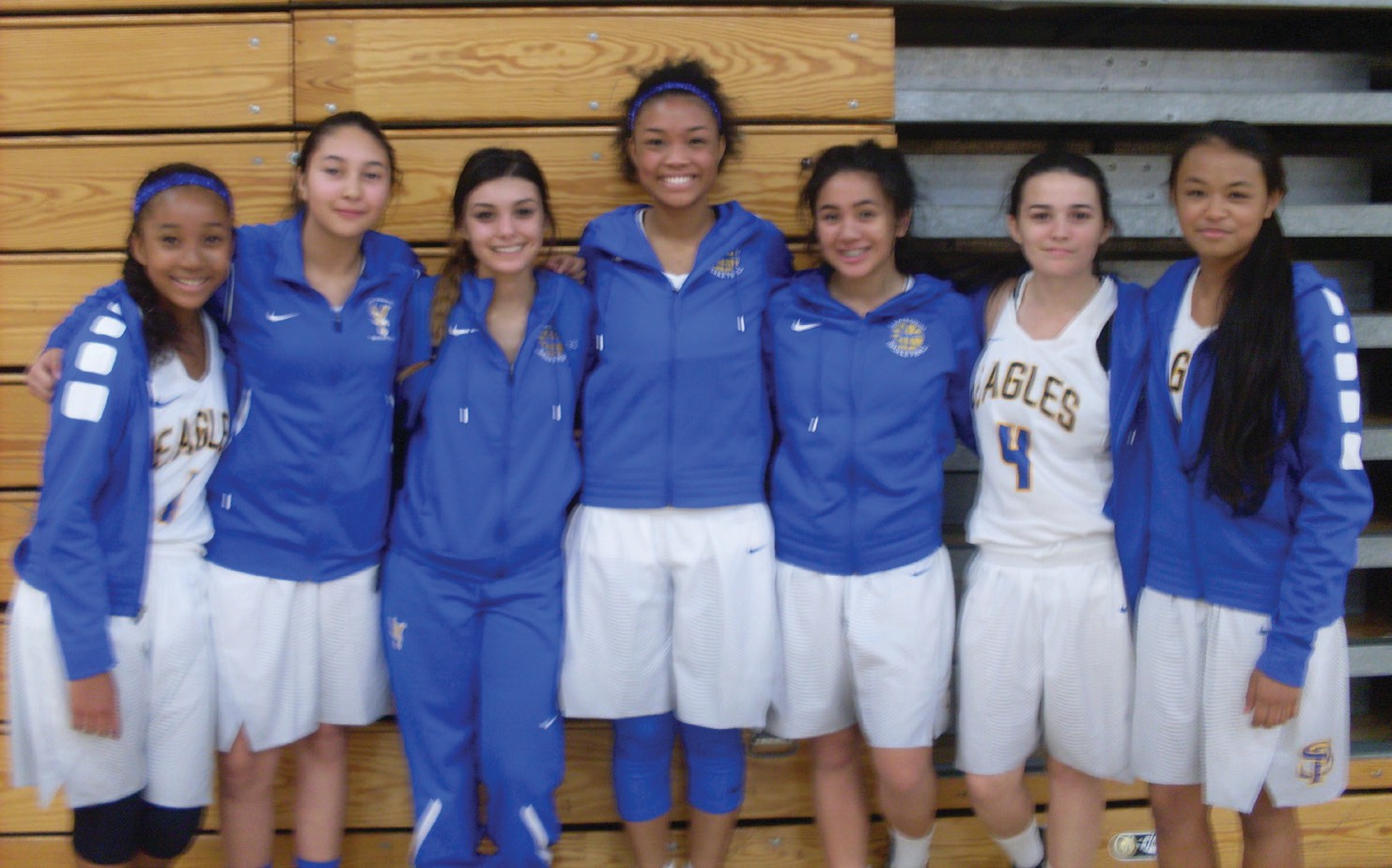 The girls’ basketball team at San Pasqual High School promises to be a force worth reckoning with this season. They are determined, hardworking, and might just be completely unstoppable.

Their practices have been focused on eliminating their weaknesses and on becoming a more serious and disciplined team. As they are planning to concentrate all their strength towards making the playoffs, they will “be much more fun to watch this year,” promises Coach Samuel “Trey” Harrison. They are far more driven and have been putting in the hours to prove it. Already preparing for a full schedule of games, they are wasting no time in working on their strategy and becoming continuously more aggressive. This young group of athletes will bring their all to every game, showing their hard work, practice, and teamwork.

While obviously set on performing to the best of their abilities, the girls and their coach are not stressing about to-do lists. When asked about his goals for the players this year, Harrison answered, “I don’t really set goals; I don’t like to put that kind of pressure on them.”

Going into further detail, he expressed his belief in the team’s abilities without the use of stressful goals or ideas for how the season should look. He expects them to work hard, stick together, and improve their game. Constantly referring to lengthy lists of expectations only creates an environment of unnecessary stress.

This is not to say that there are no expectations at all: Harrison plans on a successful season with, “quite a few wins; playoffs for sure.” The only spoken goal throughout this season is to win as many games as possible. Their 6 and 21 win-loss record from last season will need to be greatly improved upon in order to reach this goal of experiencing a season heavy with victories. Beyond that, reaching the playoffs is clearly the ultimate team goal, along with winning the league and CIF championships. Utilizing their driven attitudes, improved skill-sets, and leaving overwhelming lists behind, these girls are definitely well on their way to many successes this season.

This more relaxed view on goal setting has not hindered the team’s ability to stay focused. For the fans that have been following this team’s progress over the years, be sure to continue showing support for the Eagles this season. In addition to becoming a team that is much more enjoyable to watch, they are also far more disciplined.

Throughout practices so far they have worked on honing their strengths and improving the areas in which they have demonstrated weaknesses. “Everybody is feeling confident and excited for the season,” Coach Harrison says proudly. The team is coming together as a unit and the girls show obvious determination in their practice drills and after-game debriefs.

Junior Maile Thompson, a returner on Varsity, explains that this year the girls are “competing well together, despite so many new players.” Regardless of the fact that some of these girls are playing together for the first time this season, their cohesion as a team is clear once they arrive on the court. Overall, the vibe of this group of athletes is one of united confidence and extreme tenacity.

In terms of what requires their most energy during practice, Harrison points to their defensive game. “We’re working on a much improved defense this year, we just need to focus and work on bettering that.” With a full schedule of games fast approaching, they will have plenty of time to figure out what works best against a wide variety of opponents. Their challengers should be warned: these girls are ready to compete fiercely and to stop at nothing. The returning seniors this year promise to be especially intimidating.

“I’m looking forward to the seniors playing this year,” Harrison says, “they’ve been waiting for this season for a long time.” These seniors, Lizzie Campbell, Ashley Spounias, and Brianna Arguelles, promise to be worthy opponents. Spounias is one of the leaders on the team in free throw percentage, Arguelles is amongst the highest in number of rebounds per game, and Campbell brings the team together as their dedicated captain.

There is no question that these girls plan on playing to the best of their abilities. Their determination to win as many games as they can is evident. By working together and continuing their current focus throughout the remainder of the season, this is a definite possibility.

Harrison maintains a hopeful position as well, saying that this year the team “flows better” than last year and that the season will prove to be better overall. Without the stress of goals hanging over their heads, the girls have time to focus on bettering their skills and on growing as a team. Thompson sums it up perfectly, announcing she just “feels good about this season.” Seniors Spounias, Arguelles, and Campbell may just get to see their last season be the best one yet.