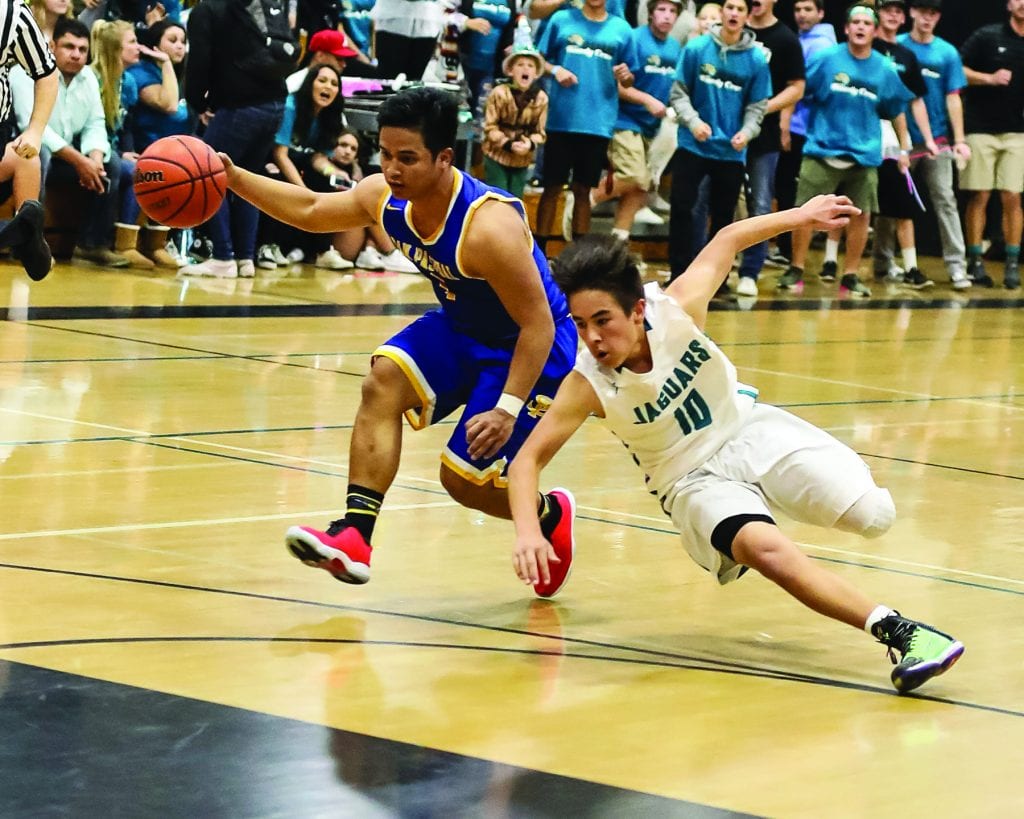 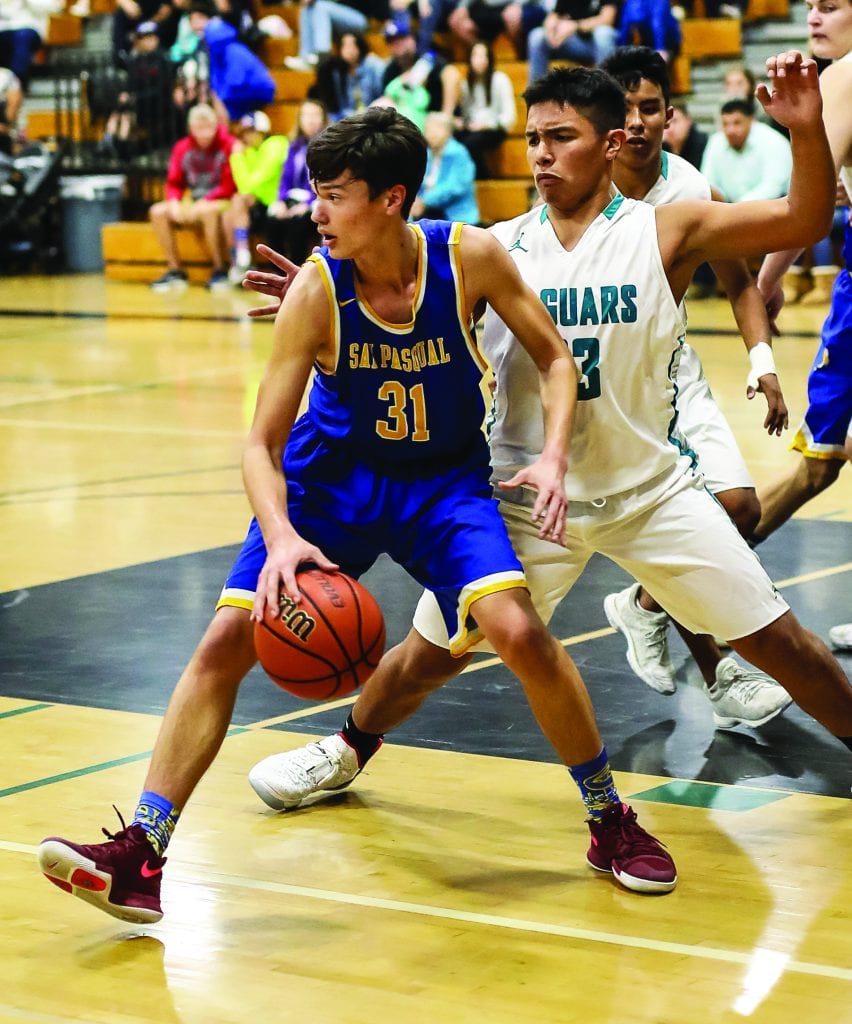 Sophomore Noah Miller, here being bodied up by VC’s rugged Noah Tortes, was a bright spot for the G. Eagles against the host Jaguars, tallying a team-high 21 points. Photos by Lenny Kerbs 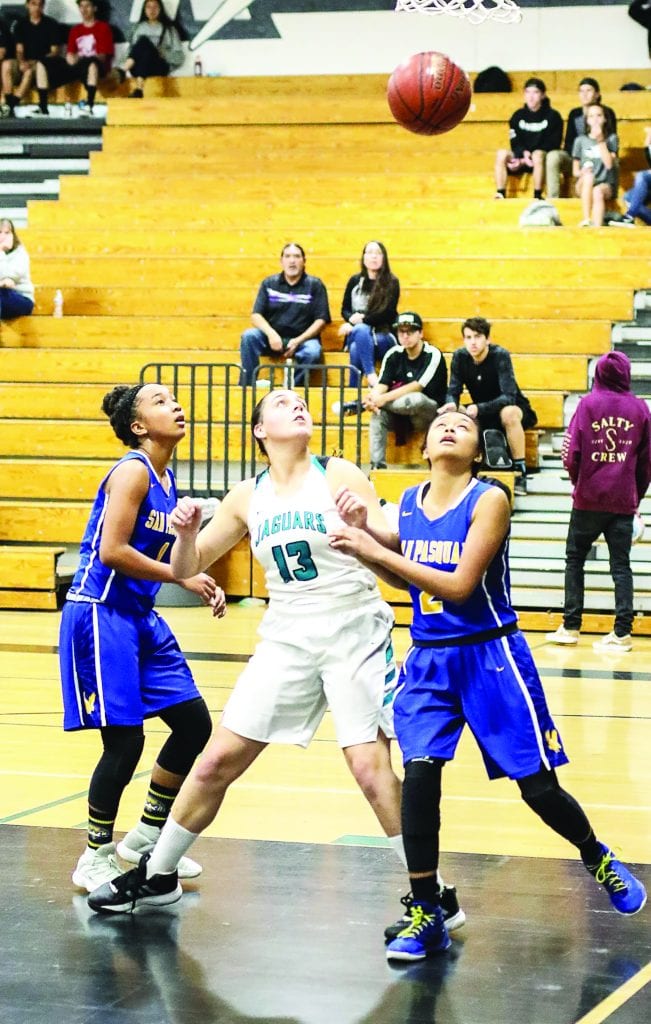 San Pasqual hoopsters Maddie Campbell (left) and Alexis Toledo (right) sandwich VC’s Alexandra Murdock as they all give their undivided attention to a loose ball during the Golden Eagles’ 58-51 victory last Friday night.

It was a tale of vastly contrasting results when it came to the two varsity basketball teams of San Pasqual last Friday night.

In the opener of a doubleheader contested at the Valley Center High gym, the Golden Eagle girls parlayed an impressive 3-point shooting attack into a 58-51 triumph over the Lady Jaguars. This hard-fought victory ran SP’s overall record to a noteworthy 17-9 and extended its current winning streak to seven. But more importantly, it kept the G. Eagles undefeated (6-0) in Valley play and virtually locked up the league title for head coach Sam Harrison III and crew.

But in the nightcap, the boys were to experience no such success. Running into an aroused and highly motivated Jaguar team determined to avenge a rather stunning loss to the Golden Eagles earlier in the season, VC was relentless from the start en route to a dominating 81-47 conquest of the G. Eagles. Though this loss was hardly earth-shattering, the magnitude of it was rather surprising in light of the considerable strides that the G. Eagles have made in rebuilding from a winless season in 2016-17. This setback saw SP’s overall ledger fall to 6-17 overall and 2-4 in the Valley (League) where it currently resides in fourth place.

However, the evening got off to a most positive start for the SP faithful when the girls took care of business. The G. Eagles were able to forge a 27-24 halftime lead thanks in large part to the remarkable outside stroking of guards Karen Nguyen and Maddie Campbell. The junior Nguyen, who displays a fluid rhythm with her a two-hand set shot and possesses remarkable range, buried three treys in the game’s first 16 minutes.

Not to be outdone, the athletic Campbell scored nine SP points during a remarkable second-quarter shooting spree that saw the sophomore drill a total of three straight 3-pointers of her own.

Nonetheless, the Jags scored a trio of baskets right after intermission to take a 30-27 edge but from there the G. Eagles took over and seized control, tallying 13 consecutive points that would ultimately stake them a 42-32 entering the final period.

A layup by Emma Cameron got SP started on this run before Nguyen delivered a swish from another area code. Then Nguyen kept the roll going with another two-hand set from beyond the arc. Now it was time for Campbell to make a mark and she did so with a nifty dribble drive that culminated with a left-handed layup. And fittingly, it was the relentless Nguyen who finished off this uninterrupted point streak with one more bomb from the right side.

Admirably, the Jags refused to wilt, twice closing within six points and once within five during the last stanza, but ultimately they could get no closer. The G. Eagles were able to keep VC at bay down the stretch because of a smooth drive to the hole by Campbell, a final trifecta from Nguyen, a sweet corner three via Maile Thompson and four free throws courtesy of Cameron and Campbell.

Though there were certainly other contributors, the primary architects of this notable victory were Nguyen, who wrapped up her stellar night’s work with a game-high 26 points and Campbell, whose 17 points reflected her considerable influence on the outcome.

Though these G. Eagles are adept in multiple areas such as getting out in transition, competing at the defensive end and bringing high energy to the task at hand, there’s no mistaking that their bread and butter rests in their ability to hit from 3-point land.

SP does a marvelous job of moving, cycling and rotating the ball around the perimeter, making it a challenge for a defense to prevent an eventual open look. And usually that look comes from downtown where the G. Eagles, spearheaded by sharpshooters Nguyen and Campbell, aren’t at all bashful about firing away.

Raining down 3-point bombs is this team’s identity, it is imbedded in its DNA, and SP isn’t inclined to deviate from that approach. The G. Eagles’ philosophy is quite clear – just keep unloading from the outside and given the number of great to good shooters that populate the roster, eventually the shots will fall with enough regularity to win plenty of ball games.

Should SP continue to find the range with its outside assaults, it might not only enjoy a perfect league season but could emerge as one dangerous opponent come playoff time.

As for the boys’ side of things, perhaps the highlight of the contest came when Raymund Rodriguez tallied quickly off the opening tap by riding home a layup that gave the visitors an early 2-0 edge. But unfortunately, that was destined to be SP’s one and only lead of the game.

Though the G. Eagles hung around for a while in the first quarter, eventually they fell behind by an 18-9 count by its conclusion.

And in the second quarter, things simply imploded for SP when it was outscored 18 to 6. The Jags were relentless with their hustle and swarming defense while exhibiting a dogged mindset that was hell bent on erasing the memory of what the G. Eagles had done to them just three games before.

VC power forward Kobe Dominguez, who was at times unstoppable underneath—and finished with a game-high 28 points— was the igniter of this telling stretch that basically removed all doubt about the game’s outcome. Dominguez muscled his way to a pair of layups and scored on a pretty spin move besides draining five shots from the charity stripe.

Leading by 21 at the break, the Jags refused to let up and kept right on coming after intermission with guard Mickey Chew (14 points) doing some serious damage when he went on a breathtaking third-quarter bombing sortie that saw him nail an impressive four treys.

With the count at 60-26 entering the final period, the Jags’ home crowd was living it up and crying out for more. But SP forward Noah Miller was able to quiet the local partisans just a tad with a gallant fourth quarter that brought a measure of solace to the visitors. The slender 6-4 sophomore was a force in the final eight minutes when he worked hard to draw three fouls that were converted into six free throws, honed in on a 3-pointer and then tallied on a nice follow shot. This scoring outburst enabled Miller to finish with a notable 21 points – the promising youngster being the only G. Eagle who managed to register in double figures.

And so it proved to be another productive night for the SP girls, while the boys will attempt to quickly move on from a performance that definitely was far from their best. In short, it was a night of radically different fortunes.