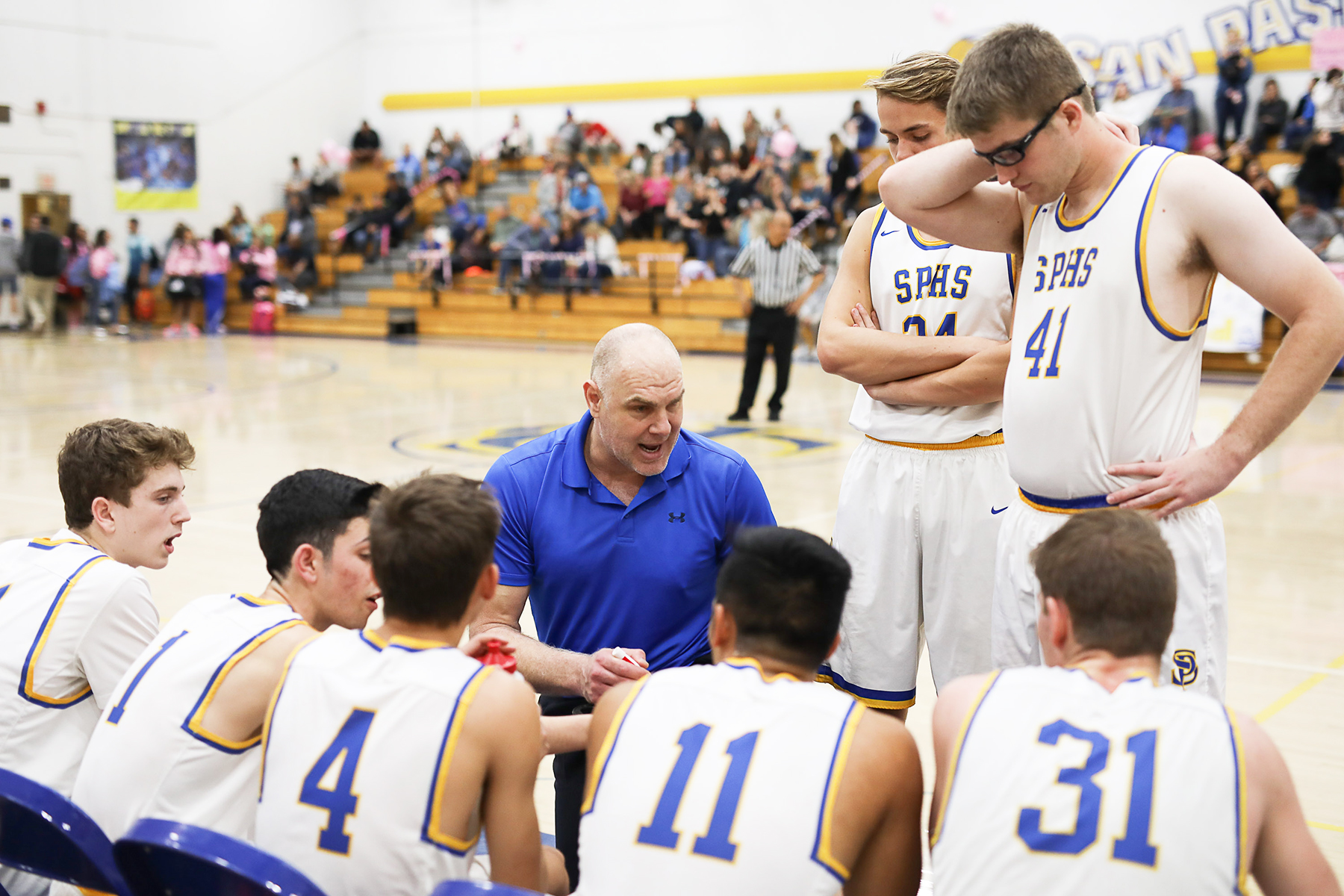 Eric Meek has been an invaluable part of both San Pasqual’s CIF basketball titles, first as a player and now as a coach.

Without a doubt, it proved to be a one of the most eventful and impactful 24 hours in the annals of Escondido prep sports.

First the San Pasqual boys basketball team, ignited by a late surge that broke a deadlock, went on to secure a 49-42 victory over Clairemont in the San Diego Section Division V final contested last Thursday night at Montgomery High. That notable victory enabled the Golden Eagles to cop their second-ever section championship. Interestingly, the other came in 1991 when current coach Eric Meek, a 6-foot-9 center, was a cornerstone piece for SP.

Then the following afternoon/evening, Classical Academy’s talented soccer team (15-6-2) produced its own share of late-game dramatics when freshman forward/midfielder Owen Michals popped a shot into the lower right corner of the net that proved the difference in a 2-1 victory over High Tech North County, also in a Division V final that took place at Hilltop High. Thanks to Michals’s timely score, the second-seeded Caimans earned their first CIF title in school history.

Let’s go into a bit more detail concerning the journey to the finals for each respective team and what transpired in their program-defining triumphs.

As for the G. Eagles, they had competed in a league (Valley) that featured testing opponents like Escondido and Ramona. Going against such competition definitely hastened their development so when they were placed in Division V for the playoffs that seemed an advantageous spot from which to make an extended run.

From the outset, it was obvious that SP was primed to do some serious postseason damage. In a first-round encounter, the G. Eagles blitzed Horizon Prep (84-37). Their next opponent in the quarterfinals was San Diego Academy but SP sounded another warning with a 77-58 romp over the No. 1 seed. Next came the semis and though Del Lago Academy offered more resistance, SP still rolled to a double-digit (64-53) win.

And when the G. Eagles (13-18) got off to a sizeable 14-0 lead in the final against Clairemont (15-17), it seemed as if their momentum couldn’t be blunted. But despite a sputtering beginning, the Chieftains refused to go away and through their admirable persistence somehow managed to tie things up at 42 apiece with just 1:38 remaining in the contest.

The G. Eagles had clearly been the beneficiary of a quick start but they would require a strong finish in order to close the deal. Revealing their clutch gene, that’s exactly what they got. In arguably the most important possession of the game, guard Vojo Danilovic hustled down court and drilled a deuce which proved to be the difference. At this point, it appeared as if the Chieftains’ gutsy rally had left them spent and SP went on to tally the next five points that brought the final count to 49-42. Balanced scoring was a decisive factor for the G. Eagles as the senior contingent of Danilovic, Vern Fournier and Ammon Scott each tallied 11 points to lead the way.

With the victory, SP (a 13-seed) will now move onto the Southern California Regionals where it will travel to Oxnard to take on No. 4 seed Santa Clara (27-6) in a first-round matchup. Winning a title and advancing to the next tier of playoff competition is quite an accomplishment for a program that just two short years ago suffered through a winless campaign.

Meanwhile, Classical came into the postseason on fire, having not tasted defeat since January 11. During that span, the Caimans won seven times and tied just once. As a result of its splendid regular season, CA was deservedly awarded a first-round bye. In the quarterfinal round, the Caimans were clearly in control while blanking High Tech Chula Vista 2-0. But the next round proved to be an absolute nail-biter with 11th-seeded Madison pushing Classical to the limit before the Caimans came through with a dramatic overtime goal that enabled them to escape 2-1.

And in the finals, Classical was thoroughly tested again when High Tech NC’s Robson Rolim de Moura put his club ahead with a goal in the game’s 17th minute. But tellingly, the Caimans answered just a minute later as Tobin Boshaw niftily converted Robert Colello’s centering pass into the tying score.

That set the stage for Boshaw to orchestrate the game-winner that came with a mere three minutes remaining. Busting down the right sideline, the sophomore striker sent a nice crossing pass to Michals. And the gifted frosh knew exactly what to do with it, making a couple of deft moves before using his right foot to boot it home.

Armed with a nine-game winning streak, the Caimans will now move onto the So. Cal Regionals where Pasadena’s high-powered Marshall (22-4-1) awaits them.

Not only do they have a dependable goalie in Liam Morris but the Caimans have bona fide firepower at their disposal with stalwarts such as Boshaw (16 goals), midfielder Kasey Haman (12 goals, 14 assists), captain Jon Lawrence (12 goals) and Michals (14 assists) spearheading the offense. So with assets aplenty, the Caimans certainly have the wherewithal to extend their current run and make this great season even more classical.