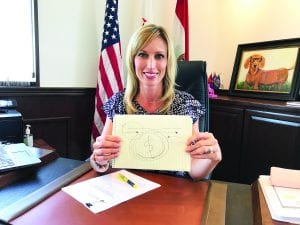 Supervisor Kristin Gaspar shows a simple diagram that she uses to explain her approach to dealing with problems before they become problems.

In office six months, Kristin Gaspar is already looking towards her legacy.

In a few years the newly seated 3rd District Supervisor will be most senior member of the San Diego County Board of Supervisors. To put that into perspective, Mrs. Gaspar just got all the furniture for her office along Pacific Highway, overlooking San Diego Bay.

It is hard to believe, but for nearly 36 years no member of the San Diego Board of Supervisors was successfully challenged for reelection, and, for decades the same supervisors hung onto power.  This paper used to routinely refer to the incumbents as “supervisors for life.”

Then came term limits. Now, watch out while things get ready to change!

“The past six months have been a whirlwind,” says the former Encinitas mayor, who was elected in November over incumbent Dave Roberts. “They have been spent understanding the County and learning how it works.” That has included meeting the department heads and getting to know them.

By 2020, when the rest of the board leaves due to term limits, Gaspar will be the most senior member of the Board. “I’m excited about how the County is changing and how the board will change,” she says.  She is learning as much as possible so as to maintain what some might call the board’s “institutional memory” and to provide continuity.

For her first few months, Gaspar has devoted herself to 1) understanding the organization, 2) getting to know her large district, which has a huge area and 650,000 residents and 3) thinking about what her legacy will be.

“My car tells the tale. I’ve put nineteen thousand miles on it in the first six months,” she told The Times-Advocate.  She has also been venturing outside of her own Third District to visit as much as possible of the entire county. “It’s important for me to get to know it,” she says.

Being proactive was a major theme of Gaspar’s election campaign last year. She preached that the County wouldn’t have to deal with so many serious problems if it kept them from happening in the first place.

“I want to be proactive instead of reactive,” she says now that she is firmly in her seat. She is particularly wants to adopt this approach for dealing with the county’s most vulnerable populations. Such as those transitioning from the military to civilian life, and its foster children—as well as the burgeoning homeless population.

“How do we frontload our resources so we don’t constantly react to problems and instead develop a model for helping people by giving them a hand?” she asks.

The link between most of San Diego’s “vulnerable” population, says Gaspar, “Is we didn’t reach them early enough, before they became a problem.”

Although many people don’t ordinarily think of San Diego’s transitioning military as a “problem,” Gaspar points out that San Diego has a huge military establishment, and many thousands are moving into the ranks of the civilian population. Often without any preparation.

“Many spent four years learning to how be a in the military and they get a day of training at the end to prepare them to be a civilian,” she says.  She wants to help exiting military get job skills and education.

“Business wants to hire them,” she says.

Another vulnerable population are foster youths, of which a staggering 97% are not going to college.

There are an estimated 40,000 youths in San Diego county between the ages of 18-24 who are not employed and not going to school.

In addition, the combined effects of AB 109 and Prop. 47 have loosened sentencing requirements and forced prisons to release large numbers without providing additional resources to deal with them, she says. “The state promised to write us a big check, but we are still waiting. She adds, “It’s harder to send people to jail. And they get released earlier.”

All of these factors combine to increase the numbers of homeless.

The supervisor has a visual aid she uses when she talks of these issues. It’s like the Venn diagram we learned about in school.  It shows arrows leading into a circle which has swirling problems and a dollar sign in the center.  The point of the diagram is that if you spend a certain amount of money on a problem before it starts to require public funds, you will ultimately spend less money overall. The same holds true to those who exit from the circle. You want to help them not return.

She points to the circle. “If we can intercept them before they enter here we can make meaningful change. And then if we can protect those who exit the circle from returning we can also achieve positive results.”

“It’s a simple concept but often it is overlooked,” she says.

Rather than having the County pick up the reins of dealing with all of these problems, she would like to direct resources at programs already working.

“I’m not a big fan of reinventing the wheel,” she says. “There are answers in San Diego.”

One such organization is  Workshops for Warriors (workshopsforwarriors.org) a San Diego-based nonprofit school that “trains, certifies, and helps place Veterans, Wounded Warriors, and Transitioning Service Members,” according to its website.

The average age of workers in advanced manufacturing is 55. There is a need for younger workers, to manufacture medical devices or work on electric cars. Workshop for Warriors trains its students in a 14-week program that moves them towards good paying jobs that average $20 an hour.

Their rate of success in placing their students is 97% says Gaspar.

She would direct more county grants to such organizations. “Right now, they graduate one hundred and forty a semester. I’d like to see them graduate six hundred,” says Gaspar. “Do we need another County program when we have something like this? We need to find ways to connect the community that needs help to such organizations.”

Gaspar is an outdoorsy type who loves facilities such as Felicita Park in Escondido. Recently the County used $15,000 in Gaspar’s Community Enhancement funds to remove about 20 invasive palm trees from Felicita Creek.

In a thank you to Gaspar, the group Escondido Neighbors United wrote: “In some cases, the palms have displaced important native trees like oaks, willows, and sycamores.  In other areas, they grow up through the branches of our elder oaks and can pull them down. None of the palms in Felicita Park are native to the area and need to be removed for the health of the habitat, trees, and to reduce impacts on the creek.”

Despite her full schedule as a supervisor, Gaspar has not given up one of her loves: coaching a Pop Warner cheerleading squad. Last year she took her squad to Florida for the Nationals for the fifth year.

When she started last year, she didn’t have high hopes for making it that far. “But I took a team of mostly new girls to the Nationals. I was surprised and very grateful that we made it,” she says. This weekend she will take her girls to coaching camp at Orange Glen High School in Escondido.

“Young people are so important to me. Kids need a positive place to spend their time every day,” she says. “You can work with kids when they are in a gang or you can work with them before they join a gang. There can never been enough grass and places for people to play.”

She is look forward to her months and years ahead on the board.  “It’s important for people to know I represent the future on the board,” she says.  “The County is changing and I am really pleased to be here at this time.”