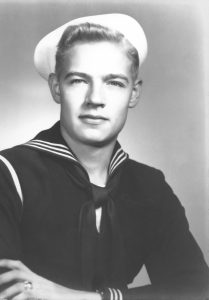 Robert Schultz at the time of his discharge from the U.S. Navy.

This is the story of a mystery, not of the kind that you see on television, or in paperbacks or on in the movies, but a mystery of a very personal, family-nature.

Recently The Times-Advocate was contacted by Robert Lumier Schultz, Jr.,  of Saucier, Mississippi, who asked us if we could update the obituary of his father, the late Robert ( Bob) L. Schultz, who died in 1980. The obituary was printed in the old Escondido Times-Advocate, which ceased publication in 1995.

We told Mr. Schultz that we didn’t have access to those archives and wouldn’t be able to update the obituary for him since we didn’t possess the original. He then asked if we could reach out to the community of Escondido and ask residents if they remembered his father—and could perhaps fill in some of the blanks about his life. If they get enough information they would like to send us an update obituary to be published.

Because, Mr. Schultz and his sisters had not seen or heard from their father for many years. They wanted to find out more about him.

This is the message Mr. Schultz wrote:

“Sir, per our telephone conversation a few months ago, I am forwarding you the following information in hopes of my father’s obituary, July 6, 1980,  being updated. There is some information I can furnish, however there are many years of information my sisters and I am curious about. 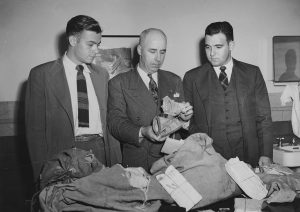 Robert Schultz (left) served as a special agent for the Southern Railroad.

“My three sisters and I last saw my father in 1960. He left my mother, myself, and three sisters and I. Until he passed on June 30, 1980 and I was contacted by the Red Cross, we never heard anything. I was stationed in West Germany, attached to the 1st Combat Communications Group, deploying to Saudi Arabia the next day.

“I am curious to this day how the Red Cross knew to contact me when I had not heard anything from my dad since 1960. I knew from one of my family members that he was living in California. I do know that after he left the Navy, he was employed by Southern Railroad as a Special Agent, then employed by Paretti Pontiac as a car salesman in New Orleans, Louisiana, then he left. At the time of his passing, he also had a son. Robert (Bob) L. Schultz, Jr., three daughters , Sharon, Paige, and, Jane. He also had a grandson, Dale, and two granddaughters, Heather and Suzanne.

“I hope this information is useful to someone in California who may also have questions, I would be more than glad to hear from them, my information is as follows:”