“Something Inside is Broken” 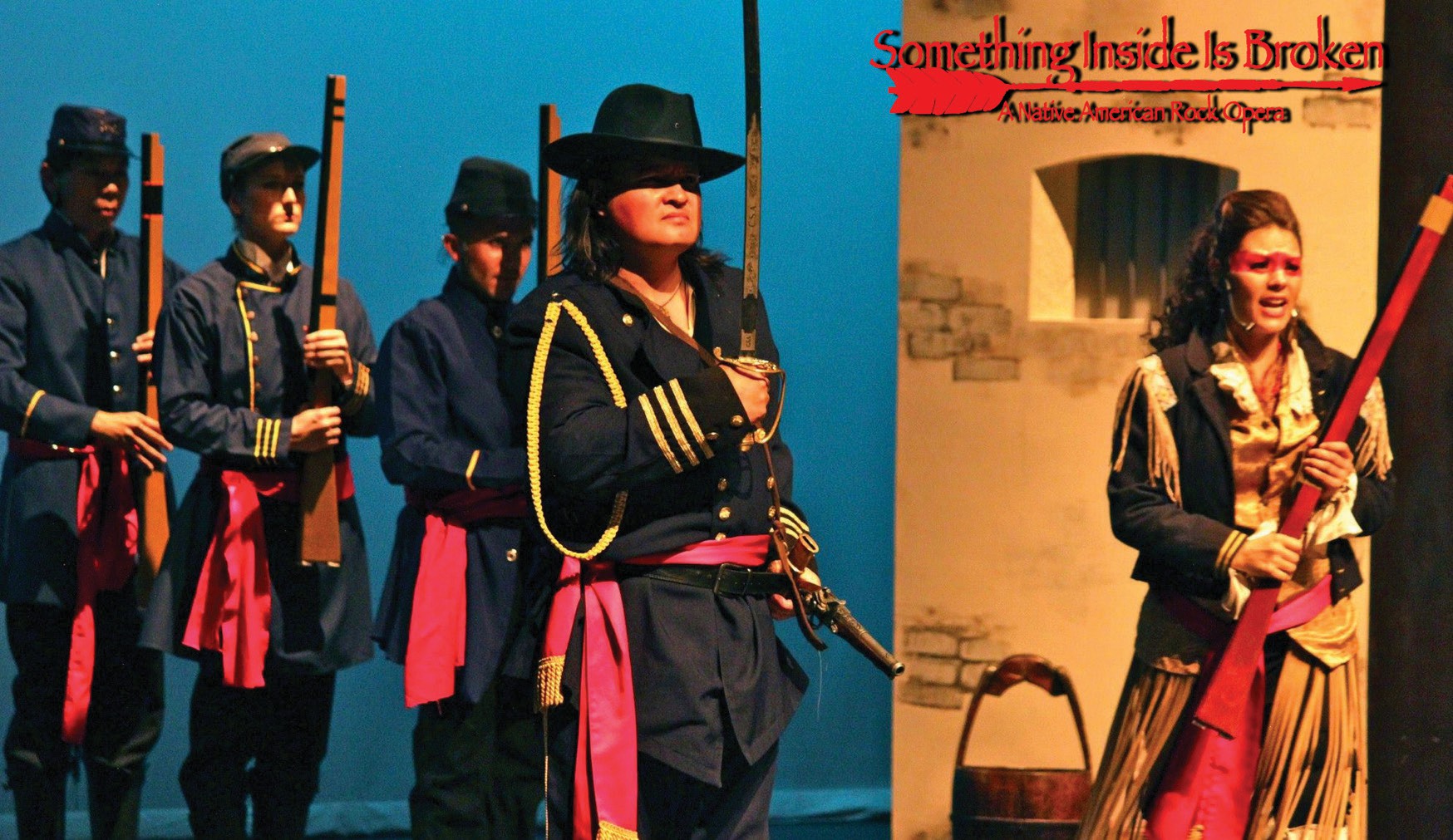 “Something Inside Is Broken,” a Native American rock opera sponsored in part by the Rincon Band of Luiseño Indians, recently concluded its premier Western state tour at the California Center for the Arts, Escondido. The brainchild of creator and Indian rights activist Alan Wallace, it tells a side of California history that is omitted from the standard history books: the oppression and enslavement of Native Americans in the period leading up to the California gold-rush.

The story takes place in four time zones. The first and introductory zone is the World Maker and creation of humans. The spirit, Peheipe, is introduced here and will appear in all of the times and in very many scenes in the opera. Acknowledged in the program as “he/she”, Peheipe, as played by J. Ross Parrelli, is very clearly a female character. This is important since a major theme of the work is the treatment of Native women by white men. Peheipe is the strongest character in the play, and Parrelli’s performance is a stand out. While spiritual in character, Peheipe, who is visible only to the audience, is neither good nor bad and does not stand in judgment of characters or events, but provides a unifying theme across the different times.

The rest of the play alternates between the three other time zones: the congressional hearings in 1906; the time of the Mexican War 1846, and a “reality” show called “Frontier Idol” set in no particular time, but unifying today’s popular sensibilities with the events that unfolded in 1846 — a year when California and U.S. history came together. Johann Sutter’s (played by Mark Hoffman) fort was an outpost of American imperialism in the fulfillment of Manifest Destiny, represented by the arrival of Captain John Charles Fremont (played by Lon Beyer) in that year. To Sutter, the Native population served as a source of field hands and women for domestic and sexual slavery. “Something Inside Is Broken” retells this period from a point of view that fills in the usual omissions without being overly critical. The story is a correction of the historical record without either in-your-face judgments or epic tragedy. The story of California’s Native Americans has long seemed a footnote to the history of the frontier simply because it is not an epic that grabs the popular imagination, but it is 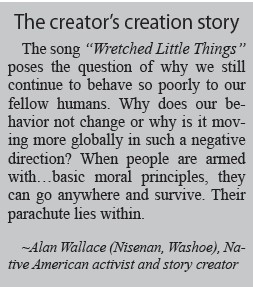 The “Frontier Idol” scenes in “Something” are some of its strongest in terms of linking small truths to a larger history. In creating this fantasy, the reality of history is made relevant to us today. The scene of the 1906 hearings is an important element because it presents personal stories as told by those people themselves, although this segment could benefit from further development.

A celebration of music, language and diversity

Over half the show’s song are sung in the native Nisenan language, although it is hardly noticeable. Instead it is the emotion that shines through the music and the dance. And although a significant portion of the players are in fact Native American, there is a good deal of diversity represented in the cast members. The orchestration is underscored by electric guitar riffs, hip hop beats, and a bold genre-mixing innovations. “Something Inside Is Broken” seeks to combine great storytelling, music, dance and language into a powerhouse, Broadway-worthy production. But it will need some refinements before it can graduate to that level — which is exactly the plan.

An ambitious project in its early stages

“Something Inside Is Broken” is clearly in the early stages of development. According to writer/composer/ director Jack Kohler, “This is an opportunity for Native tribes to collectively build an indigenous multimedia empire.”

Overall the material needs to be refined. If the show is to fulfill its ambitions, it needs to be a much bigger musical production with refined themes and a few major songs. The current version of “Something Inside Is Broken” cannot be faulted, for this since the creators’s timeline for it in the future clearly envisions a major spectacle. It is a big show currently in a small package. If you see it in its current version, you will probably see history not only in the telling but hopefully in the making.

As evidence on the sponsors page on the website (somethinginsideisbroken.com), the creators envision development of the project over the next three years into a major theatrical production. In their words, not mine, possibly “a Native American ‘Hamilton.’ ” You can’t get more ambitious than that. Whether or not those ambitions can be realized, “Something Inside Is Broken” in its current form has great potential to be much more.