Softball team of superstars enjoy being top of their league 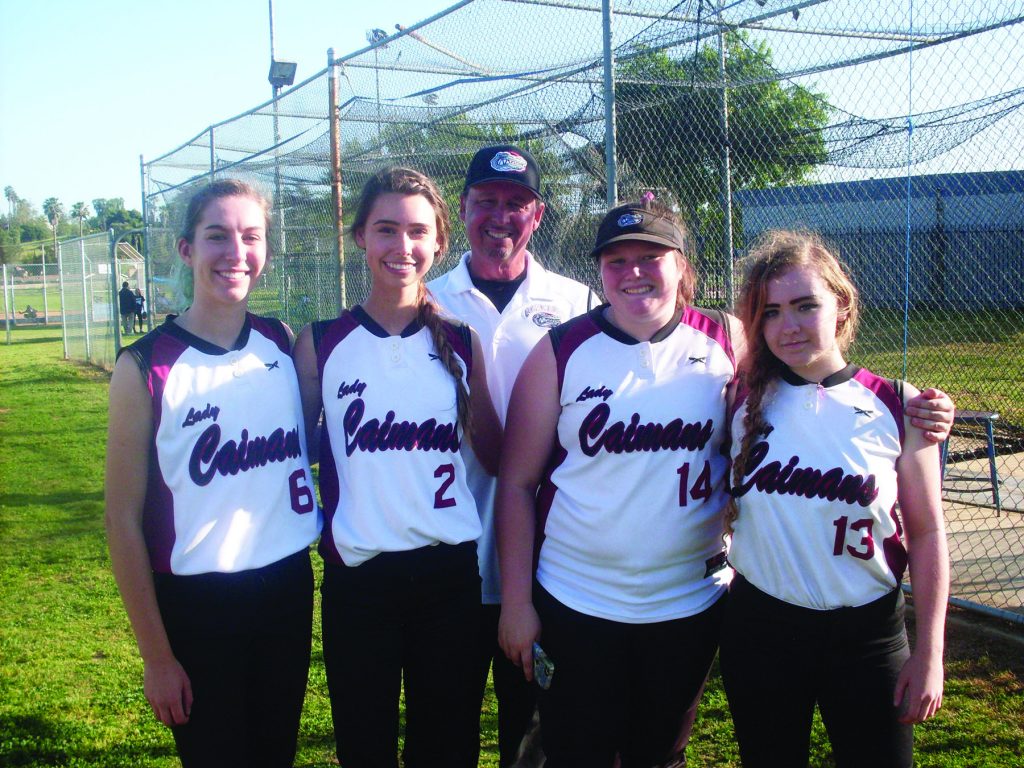 The girls on Classical Academy High’s varsity softball team find successes in their dedication and love of the sport.  Having fun on and off the field in a team that is more like family, these Caimans have found themselves at the top of the list of teams to beat.

With their genuine admiration of softball and culture of camaraderie, they plan to remain unstoppable this season.  Gabrielle Smith, first baseman, says, “Coming off of the CIF win we really want to do that again, and to win league!”  High hopes and high spirits reign in the dugout and seem to be one of the reasons for their continued success.

These girls are undefeated in their league so far and carry an overall 8-2 win loss record.  In addition to their optimism and passion for softball, this record is largely due to their incredible pitcher, Jaemaan “Jae” Holt.

Holt comes from a tradition of softball.  “My whole family played,” she says.  “Two of my siblings are actually coaches on this team.”  On the mound she seems completely in her zone.  Boasting of her talent, Coach Marc Sallaz says she’s already had a few shutouts this season.  In addition to this feat, she has managed 30 strikeouts, with only one home run against her this season.  While clearly a superstar on the mound, she didn’t intentionally seek out the spotlight.  “I’ve just always been the only pitcher on the team, so I’m the pitcher,” she says with a shrug.  While remaining modest, it’s clear Holt is a crucial part of the team’s strengths. 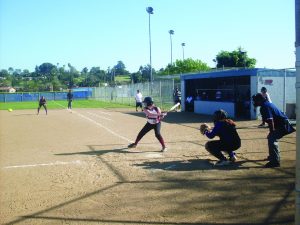 Talented pitcher Jae Holt can also be a threat with the bat.

Confident in the field, the team also has reason to boast of their offensive strengths. Lindsey Allen and Olivia “Livi” Sallaz hold the two highest batting averages on the team.  With two Varsity years under her belt, Livi Sallaz has played 29 games and maintains a .484 batting average.  This young Caiman explains that softball has always been a part of her life.  “I’ve just always played it.  I learned to love it!” she says.

For her the experience has only improved since joining the team at CAHS.  “It’s been really fun playing in high school, coming in as a freshman and joining the team.”  These young athletes have banded together and formed not only a team but also a family of passionate and talented people.  “I feel good about this season,” Livi Sallaz declares, “we all have positions we’re really good at and I’d love to see us all improve in those as well as overall.”  A common goal throughout the team is to defend their CIF title, along with improving enough to win league.  Livi Sallaz reveals they “were third in the league last year, so it will be a good challenge.”

While the members of this team have a lot on their minds and are working hard to achieve these goals, they never forget to enjoy themselves.  Allen states confidently that they all “get along and can tell each other anything.”  The girls have mastered the balance between work and play.

Their dedication is obvious.  “The team is almost business like,” says Coach Sallaz.  “they play hard and work out hard.  They’re not overemotional and are very focused.”  Each team member is utterly dedicated to the sport.  Most have played since they were young and take their time on the field very seriously.  However, they are not overly absorbed in this stoic and potentially strenuous mindset.  While determined to succeed, they maintain a “light atmosphere,” according to 2nd baseman and 4th hitter, Lauryn Butler.  “We’re out there cracking jokes even if we’re down runs.  We want to have a good time and try our hardest.”

This attitude allows the players to feel comfortable not just in the dugout but also on the field.  They maintain a tough desire to win while not pressuring themselves into overwhelming fatigue.  This is a team anyone would love to join.

Butler credits her enjoyment of the sport to its balance of teamwork and individuality.  “You have to work on and correct yourself,” she says.  “It’s almost an individual sport but you’re still part of something bigger than yourself.”  When at bat or guarding a base, it’s all about a personal decision to succeed.  Each member plays her part with an individual goal and skillset.  However, this individualism does not make for an entirely isolated position.  The team remains dependent on one another’s accomplishments, each working together to arrive at the position of success these Caimans now enjoy.

Managing to combine their love of the sport with a true sense of friendship, these girls really understand what it means to be a part of a team.  “They all help in practice,” Coach Sallaz explains, “the older ones help out with newer teammates and they all take that feedback really well.”

For him it’s all about developing leaders.  “I don’t really do captains, I look for leaders to emerge—they take responsibility and show humility.”  Utilizing the demands of teamwork and the challenges of softball, Coach Sallaz looks to cultivate an atmosphere that shapes the athletes into mature and responsible people.  “It’s not about the sport, although I do love it,” she says.  “It’s about watching the girls grow and learn and develop.”

This mindset has positively aided in the development of such powerful and driven young athletes.  With clear goals and a solid support system, these Caimans are sure to continue to find success.