So far, so good for the Golden Eagles 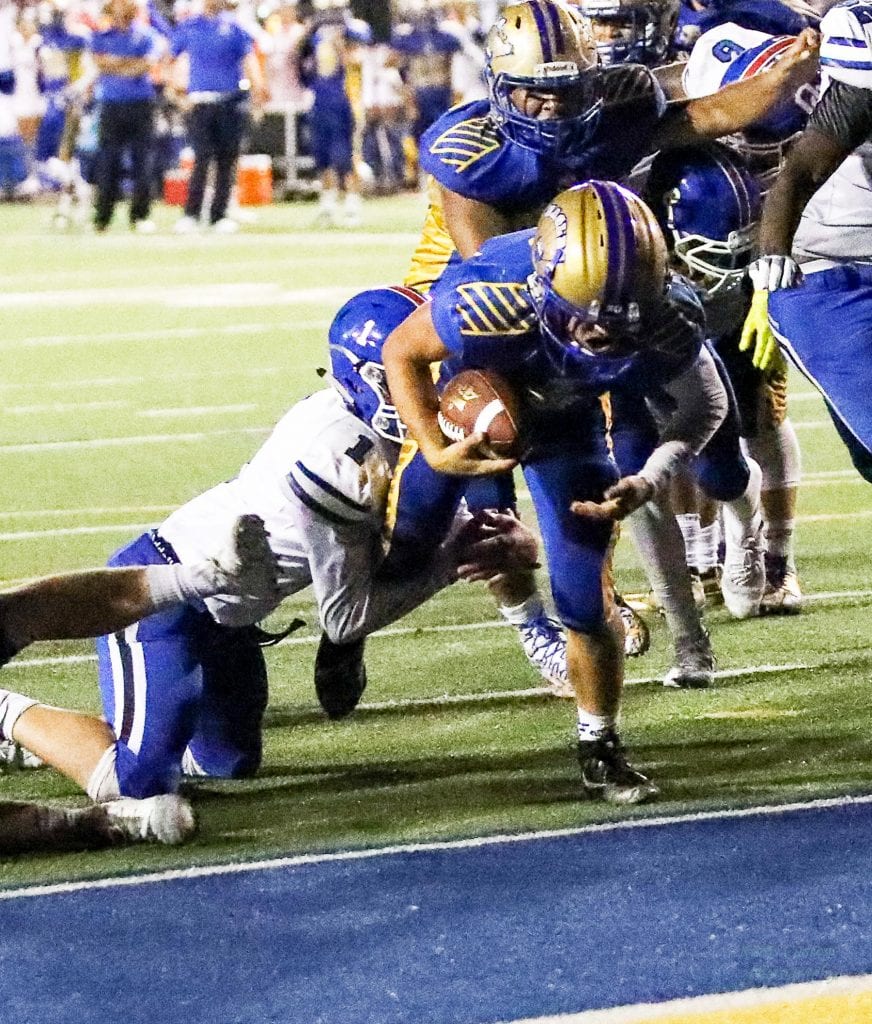 Dual-threat QB Trevor Jungman is expected to have a productive senior season for the G. Eagles. Photo by Lenny Kerbs

Entering the 2019 season, San Pasqual head football coach Tony Corley had a pretty good feeling that his squad possessed the wherewithal to be quite competitive.

Yes, the Golden Eagles had lost some real contributors from the previous year due to graduation but key and instrumental players like linebacker Johnny Vega, quarterback Trevor Jungman and fullback Mark Santar were back in the fold. Moreover, Corley sensed that he had the personnel to fill in the holes left by the departure of those that had moved on.

And there were other aspects related to his current team that encouraged the coach. “This is a close-knit group of players that really likes being around each other,” says Corley. “They also work hard very hard and are really coachable.”

And thus far, SP has parlayed those positives into a fine start to the season with a pair of impressive wins out of the gate. In their opener on the road against Sweetwater, the G. Eagles rolled to one-sided 42-0 victory with Santar (3 touchdowns) and Jungman combining for 170 yards on the ground. Meanwhile, the swarming Vega spearheaded a defense that yielded just 160 yards by making 14 tackles, three of which resulted in a loss.

Then this past Friday night, host SP proved it could withstand the challenge of a stouter opponent en route to a 35-31 triumph over Rancho Bernardo. “We really had to step it up in that game and get physical,” explains Corley. “Which we did, particularly the guys upfront on the offensive line.”

So as they prepare to travel south for a matchup with Westview tomorrow night, the G. Eagles appear to have plenty going for them as they seek to produce not only a notable season but challenge for a Valley (League) crown as well.

If the G. Eagles are to continue flying high, their triple option attack must thrive and control both the ball and the clock.

In the senior Jungman, SP has a heady signal caller who is a true student of the game. A genuine dual-threat, Trevor is a nifty runner who can also throw it to good effect when called upon.

When it comes to toting the rock, the physical fullback Santar figures to get a lion’s share of the carries and well he should. A tough kid who’s quick, strong and mighty hard to bring down, Santar is an indispensable element in the G. Eagles moving the chains. It’s no exaggeration to state that it all starts with Santar— so look for this runner blessed with great balance to do some heavy lifting on the offensive side of the ball.

Though SP’s preference would be to carve out chunks of yardage on the ground, that doesn’t mean the G. Eagles aren’t capable of successfully going up top. In addition to Jungman’s serviceable arm, SP has a bona fide receiving crew. In Kody Ketcham, the club has a superfast long-ball threat that can stretch any defense. In addition, athletic Joey Chappelle has shown he can make plays as a wideout while Ethan Huffman and Masato Thompson could be pulling down catches in situational roles.

As for the line upfront, it’s solid and seems up to the task of setting a tone. At 6-6, center Ryan Bill is a returning starter with considerable length who does a splendid job of creating space. And in Fernando Reyes and Diego Soto, the G. Eagles have a pair of guards who won’t overwhelm you with size but make their presence felt with conspicuous strength and toughness.

Transitioning over to the defense, SP operates out of a 4-4 deployment that, while not fancy, is highly functional and emphasizes what the G. Eagles do best.

And it’s certainly no hype to claim that the rock of the D is the remarkable Vega. A three-year starter who has led the team in tackles the past two seasons, Vega has an incredible nose for the football with a penchant for making big plays. Instinctive and hardnosed, Johnny is a constant menace to the opposition. A consummate leader, no one doubts that Vega is the defense’s heartbeat and its most valuable commodity.

Another linebacker of note and worthy of attention is Matt Hodgins, who has shown himself to be a terrific complement to Vega with his speed, physicality and ability to generate pressure when stunting.

Down in the trenches, there has been a total makeover but thus far defensive ends Devin Nocon and Armando Godina have truly produced and are giving the G. Eagles the type of effort that bodes well for the rest of the season.

Moving back to the secondary, there’s a brace of cornerbacks that qualify as real gamers. In the versatile Thompson, the G. Eagles have a defender with legitimate lockdown capability as he demonstrated versus RB when he neutralized the Broncos’ top receiver. And then there’s the all-around Huffman, who need not take a back seat to anyone with his combination of speed and coverage skills.

Adding to the good vibe that currently surrounds SP is the knowledge that the special teams figure to be a plus and should contribute in a meaningful way. Santar is an able punter with a good leg who also offers the threat of a running off a fake. Liam O’Callaghan will be tasked with the placekicking chores and thus far, the two-sport soccer player has performed splendidly, converting all 11 PATs that he’s attempted. Reliable on field goals from 30 yards on in, O’Callaghan has shown he can definitely extend beyond that range if required.

And when it comes to the return game, Thompson and Huffman will be taking care of matters when it comes to kickoffs while bringing back punts will fall to James DeBora. Revealingly, DeBora demonstrated his bona fides when he delivered a 48-yard TD return versus Sweetwater.

In this his 13th season as a head man, Corley still very much loves what he’s doing. Plus, he relishes the chance to continue adding to the SP football tradition and helping to develop young men who will be “champions for life,” well beyond their football experience.

The venerable coach believes he can accomplish those goals while winning a number of games this season. “Our mindset has always been to be physical and aggressive and to control the game upfront,” he says. “I think this team has the potential to do that.”

Indeed, based on the early returns, the G. Eagles look to be a promising team that can go places. Thus far, the takeoff has been a positive one, suggesting that a memorable flight might be in the offing. As of now, it’s clearly been a case of so far, so good. The question that remains is how much better can it get for Corley and crew?