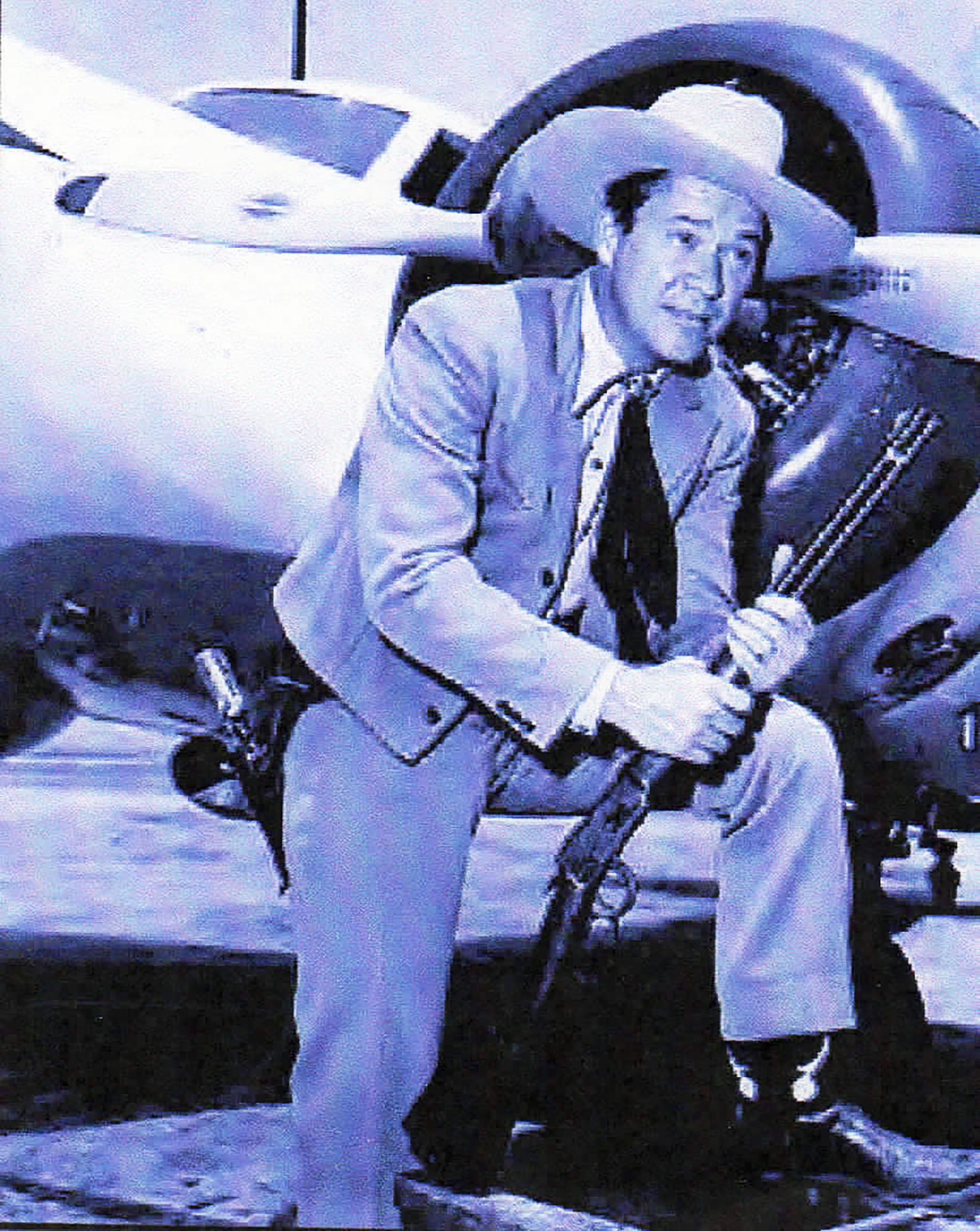 There are several private airfields in the Valley Center-Pauma Valley area, among them one with historical significance, but only one that was celebrity-owned and had a connection to a popular television series that aired on ABC, CBS and NBC over a 15-year period.

The little-known airstrip was owned by actor-pilot Kirby Grant, best-known as the star of the cowboy adventure series “Sky King” in which he portrayed a pilot who captured criminals and found lost hikers with the use of his airplane.  He was called “America’s flying cowboy.” His home was at the end of the airstrip where he would often alight after a day’s film shooting.

More than three decades after his death, “Sky King” remains popular with a national fan club and a photo display at the Valley Center History Museum. “Hardly a month goes by that some fan of the actor-pilot or an aviation buff is not in the museum to revisit their one-time hero,” said Museum president William Boyett.

“Many out-of-state fans visit the local museum,” said Boyett, “after they discover that he lived here.  Most are sad to learn that his home was destroyed in the wildfire of 2007.”  An archive on Grant is maintained by the Valley Center Historical Society and it is often made available to visitors.

Grant’s private 2,150-foot airstrip was on North Lake Wohlford Road near Ayers Ranch Road.   Although most of the strip has vanished over time, traces can still be found near Station Road which takes its name from the adjacent Sheriff’s Station.  The main entrance to the residence was around the corner on Valley Center Road.  Two impressive stone pillars which once marked the entrance to his home are gone as well.

Like the Sky King character he portrayed on television, Grant was a rancher as well as a pilot, having launched his flying career at age 18 as a barnstormer.  He commonly was at the controls of a twin-engine Cessna T-50 Bobcat or a 310B.    The TV series, which had its start on radio, aired from 1951 to 1966 with reruns continuing past that date.  Grant was featured in 136 episodes.

Coincidentally, the actor who was cast as the sheriff on the TV show, Ewing Mitchell, also lived in Valley Center on Cole Grade Road.  At one time, he served as Grand Marshal of the Western Days parade.  Actress Gloria Winters, who appeared as Penny, the niece of Sky King, lived in Vista.  Most episodes of the show were filmed in the high desert.  When the TV show ended, Mitchell became a circus performer.

Grant died in 1985 —not in an airplane incident — but in a fatal automobile accident while driving to Florida.  He was en-route to the Kennedy Space Center to be honored for encouraging aviation and space flight.  He was 73.

For more about Sky King or Kirby Grant, visit the Valley Center History Museum at 29200 Cole Grade Road which is open Tuesday through Saturday from noon to 4 p.m.  Admission is free.  For more information, visit vchistory.org or call 760-749-2993.