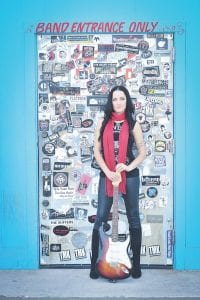 The Los Angeles-based musician recently teamed with former Grammy winner and blues guitar legend Beverly “Guitar” Watkins for two memorable shows in Arizona, including one at the famed Rhythm Room. Rein was interviewed in a cover story that appeared in the Prescott (AZ) Daily Courier.

Rein joined the J. Rockett  Audio Designs artist roster this year, and now plays their pedals during her live shows and audio recordings. She also continues to be a favorite of the media, with recent interviews in, among others, Valley News; Guitar Girl; Share My Guitar; The Blues Highway; The Rock N’ Roll Music Company; as well as stellar reviews for her 2016 album “Long Road in Rock & Blues Muse,” among many others.

Rein is among one of the more popular social media presences on Facebook Live – is also signed to D&A Guitar Gear. Long Road finished #96 in the Top 200 Best Blues Rock Albums of 2016 as reported by the influential Roots Music Report, while Diana was voted “Best Female Artist” for 2016 by the Doc’s Blues Awards. She was also chosen one of the “25 Artists and Bands who Made 2016 Rock!” in Rockwired Magazine’s year-end issue and won “Best Blues Artist,” “Best Female CD,” and “Fan Favorite,” as voted by the website, L.A. Music Critic.

Blues Bytes wrote: “Reins’ voice is very reminiscent of a young Emmylou Harris. She’s capable of conveying vulnerability or toughness in equal measure and adds a versatility to her music.”

The title track eases you into the album with the admission that life tried to steal her dream but “it’s been a long road and now I’m coming home, time forgives, lets me in, starting over.”

With vocals and guitar solos intertwining in a call-and-response fashion, the melody keeps you floating on a sea of sound. “Wild One” punches the listener in the gut with its bone-rattling bass line and lead guitar riff. This sets the stage for what Long Road is about: Soaring guitar solos and thought-provoking lyrics.

“I love to play the Blues till dawn, my main man is Stevie Ray Vaughan,” says the singer: which also allows Rein to honor her biggest inspiration. “Livin’ Loud” exudes a swamp-y swagger, it’s Hendrix-esque ‘60’s guitar solo driving home the point that loud is the way it’s going to be. “Greenlight” is a response to Doyle Bramhall Jr.’s “Greenlight Girl,” with driving drums that won’t let up and guitars that sound like a train steadily making its way into the stratosphere.