On Friday, January 26, in the 800 building on campus, six graduates of Escondido High were formally inducted into the school’s Hall of Fame.

It proved to be a night of memories, fellowship and honoring. The evening’s festivities began with a reception, followed by a welcome and introductions. Next came the Hall of Fame presentations and finally a walk over to the Cougar gym, where the select six were recognized before a sizeable crowd during halftime of the basketball game between San Pasqual and Escondido.

Among the speakers that took to the podium for this momentous occasion were EHS Athletic Director Steve Bridges, Principal Adrianna Lepe-Ramirez and legendary football coach Chick Embrey.

The fundamental purpose of the Hall of Fame is to recognize those who exemplify the mission of EHS. Among the criteria necessary for consideration, a candidate must have had involvement with EHS and accomplished something of importance/magnitude/merit in one of five areas including athletics.

The following is a brief thumbnail sketch, in alphabetical order, of the six honorees that distinguished themselves not only in the athletic arena but also lived the Cougar motto of being “Loyal, Strong and True.”

Jim Adkins – The embodiment of grit and determination, Adkins (a 1965 graduate) was one of Esco’s finest distance runners. As team captain, he led the Cougars to the 1964 CIF Cross Country Championship while finishing 4th individually. Adkins also established a school record time of 4:19.2 in the mile at the CIF Track Championships where he also came in 4th.

In addition to his running exploits, Adkins made an indelible mark in other areas at EHS such as being senior class president, commissioner of athletics and editor in chief of the school newspaper “The Cougar.”

Adkins went on to have a stellar running career at both Palomar College, where he set seven track event school records, and San Jose State, where he was a factor in helping the Spartans to win the NCAA National Championship when he delivered a personal best of 4:09.2 in the mile.

Later, Adkins directed his energies for 31 years into serving youth and sports ministries that focused on mentoring young athletes. Currently, he is the president of Let’s Talk USA, a non-profit endeavor whose purpose is to help international students learn English.

Adkins also authored a book entitled “Life Lessons from Speed City” that dealt with the realities of racism that he learned about while interacting with a number of premier African-American athletes. 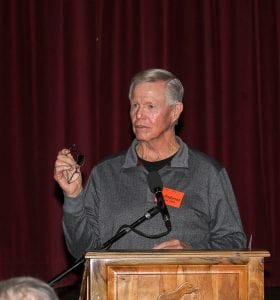 Donnie Anderson was a football standout who has truly given back to the Escondido community.

Donnie Anderson – A 1964 graduate, Anderson played both football and baseball as a Cougar. A member of the 1962 CIF Champion gridiron team, he was selected 1st team All-League a year later. Anderson also had the honor of participating in the Breitbard All-Star Game.

After his graduation, Anderson began his work for the City of Escondido. In 1969, he was promoted to director of parks, recreation and community services. Donnie would spend 37 years with Parks and Rec. and his joint-use-of-facilities policy was instrumental in helping both Escondido schools and the community at large.

Anderson’s local influence has been vast and considerable. Among his many achievements include being greatly responsible for planning and developing Ryan, Mountain View and Jesmond Dene Parks, the East Valley Community Center, the Sports Center, the Adult Softball Complex, the City’s first Master Bicycle Plan and Daley Ranch.

He has also served on the Board of Directors for the Escondido History Museum and Palomar Family Counseling. And not to be forgotten was his vital work in the building of Wilson Stadium.

A testament to his standing as a real doer is reflected by the fact that a community building bears his name. Anderson’s commitment to both the Cougars and Escondido has been deep and impactful. 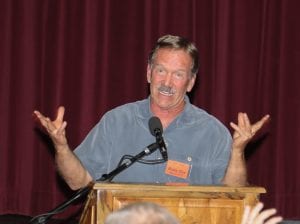 The popular Brady Clay has impacted EHS on multiple fronts.

Brady Clay – A 1972 graduate, Clay was active in the Cougar swim and music programs. He was a popular member of the Notables, the signature vocal group at EHS and took part in musical productions such as Westside Story and The Music Man.

After earning multiple degrees from Northern Arizona University, he began student teaching at Esco as well as kicking off his coaching career in track under Coach Embrey. Becoming a fulltime instructor in 1984, Clay remained at the school on Broadway until his retirement some 32 years later.

Clay filled many roles with both the cross country and track programs and during his tenure served as head coach for both programs. Highly respected and well-liked while instructing on such subjects as U.S. History and Psychology, Clay became one of most effective teachers on campus. And he became a trusted advisor to a myriad of clubs at school that are too numerous to mention here.

Moreover, Clay has forever earned a niche in local lore by becoming the beloved voice of EHS, handling Master of Ceremony duties at Cougar Awards and Graduation for over 25 years. The personal touch he has given to this particular labor of love has long been appreciated by a grateful student body.

Clay’s role as a one-of-kind mentor, teacher, promoter of campus programs and coach are only a few of the reasons he has been duly enshrined into the Escondido High HOF.

Dave Graves – Described as brilliant, gifted and unselfish, Graves was a running back of renown. In 1978, he along with a talented offensive line that combined to form the “Graveyard Shift,” were greatly responsible for an Avocado League Championship. During that memorable season, Graves earned designation as the AL Offensive Player of the Year, the CIF Co-Player of the Year and due in great part to his outstanding work in the classroom, the National Football Foundation Scholar Athlete of the Year.

Since then, his contributions to the local community have been many and varied. Among his involvements have been as a group leader at his church, a finance chairman at Escondido Charter, a board member of the Casey Foundation and Cougar Athletic Club as well as having provided free legal services to numerous nonprofit organizations throughout Escondido. 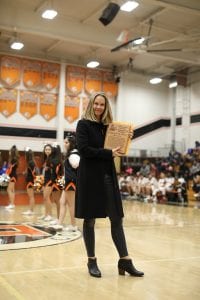 Hannah Sibersky (Turner) excelled as an athlete, student and dancer.

Hannah Sibersky (Turner) – A 1997 graduate, Sibersky earned an impressive eight varsity letters while toiling for the volleyball, basketball and track squads. She was known for many things including being smart, competitive, coachable and exhibiting true leadership qualities.

Among her plentiful highlights as a Cougar was being selected to the All North County 2nd team in basketball and the All-Avocado League 1st team in track.

A superior student, Sibersky graduated from EHS with an impressive 4.4 GPA and it was her notable work in the classroom that was greatly responsible for her being chosen as the 1997 Female Scholar Athlete of the Year by the North County Times.

And certainly not to be overlooked were Sibersky’s contributions to the EHS dance program where her considerable talents were often showcased.

After graduation, Sibersky played a year of hoop at UCSB and had a hand in helping the Gauchos to a Big West Championship and an NCAA berth. But ultimately, her passion for dance became her prime focus and she became a member of the touring UCSB student dance company. Her excellence in the arts was such that she received the prestigious John E. Profant Award in 2002. 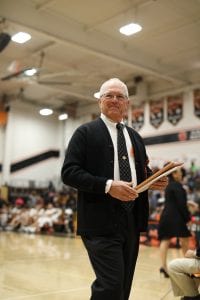 Art Warren has made a mark at all three of Escondido’s comprehensive high schools.

Art Warren – Warren (a 1969 graduate) was an accomplished baseball player at EHS, Palomar College and USIU. Undoubtedly, the high point of his playing career occurred when he was named the team MVP on USIU’s 1973 National Championship team.

After graduation, Warren began a notable connection with all three comprehensive high schools in the Escondido Area. At EHS, he coached the three major sports of baseball, basketball and football. After moving over to Orange Glen in 1984, Warren taught PE in addition to his duties as a coach in four different sports including girls’ volleyball. In 1994, he joined San Pasqual High where he served in the capacities of baseball coach, Athletic Director and Assistant Principal.

Warren also enjoyed a stint as the head baseball coach at MiraCosta College and today is a volunteer baseball assistant at Cal State San Marcos.

Without question, Warren has shown himself to be a committed and dedicated mentor, teacher, coach, administrator and servant who has had a significant influence not only on his students but the entire Escondido community.

Writer’s Note – Nearly all of the background information used for this article was found in the Escondido High School’s Hall of Fame program.