Sing: a movie for when you’re tired of Moana 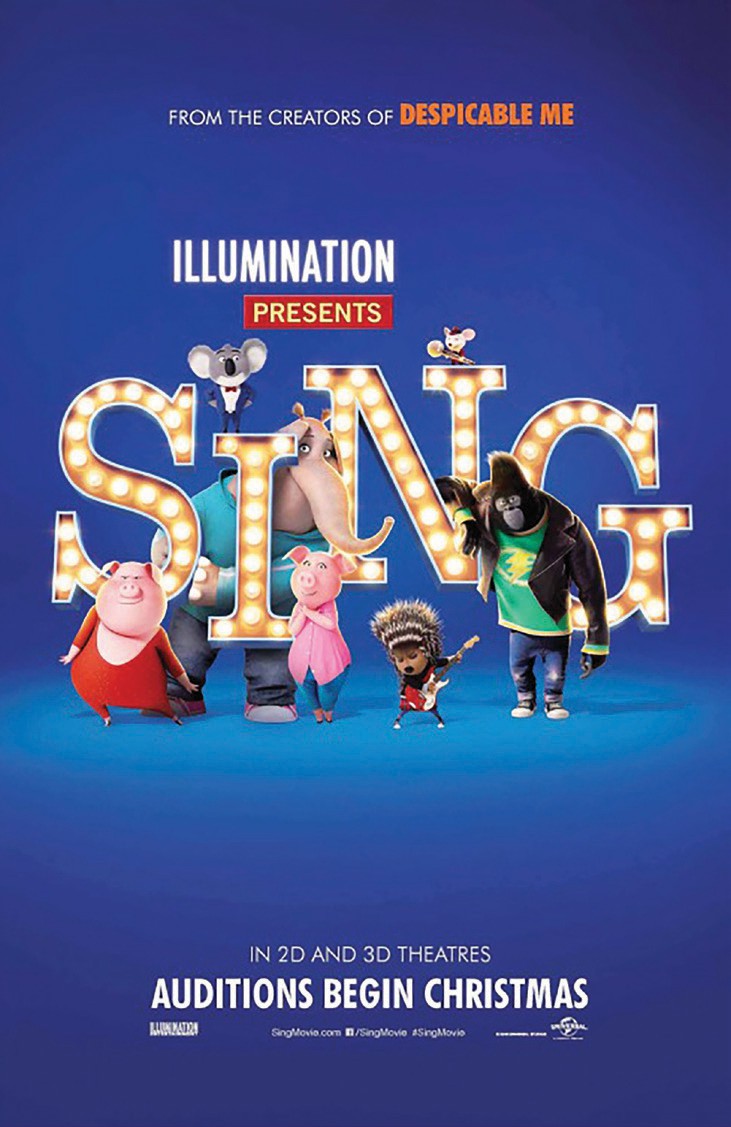 Matthew McConaughey stars as Buster Moon, a koala who owns a huge theater that has fallen on hard times. He plans to save the theater by holding a singing competition. The contest is a huge hit with a line of hopefuls stretching around the block, but only because they think the prize is $100,000 instead of the measly $1,000 that Moon can actually offer.

Moon winnows the field down to six acts, which at five minutes apiece is going to give him a thirty-minute show instead of the epic he needs, unless he’s planning 90 plus minutes of ads. Seriously, there’s no reason Moon couldn’t narrow it down to something in the double digits and then contrivances of the film could see all but five drop out. The five main singers are…

—Johnny (Taron Egerton) is a big tough gorilla with a sensitive side who wants to be a singer instead of a career criminal like his father. He shies away from the criminal lifestyle because singing is attractive and not because of moral objections. Or at least the movie forgets to give him moral objections, which would be better for his character.

—Rosita (Reese Witherspoon) is a pig housewife with 25 kids who needs some passion back in her life. She’s paired with the overly-passionate Gunter (Nick Kroll), who loves to wiggle around in skintight outfits for PG laughs. She puts her family life on hold for the competition, leading to the creation of a wacky breakfast contraption. As routine as this movie is, I’m always up for a wacky breakfast contraption.

—Ash (Scarlett Johansson) is a teenage porcupine who’s out of her element performing as a solo act instead of in a duo with her loser boyfriend. She has a “punk rock” gimmick, which I scoffed at until she started spraying quills out into the crowd. Shooting hazardous projectiles at fans is admittedly a pretty punk move.

—Mike (Seth MacFarlane) is a mouse who takes after Sinatra. He’s a little animal, but he’s got big dreams and an even bigger chip on his shoulder. Of all the main characters, he’s probably been used the least in the film’s advertising, which is a shame because the fast-talking hustler is the most consistently funny outside of Moon’s dotty lizard assistant (Garth Jennings, the film’s director).

—Meena (Tori Kelly) is an elephant who is the most physically imposing and the most shy to perform (which is awfully similar to Johnny’s persona, come to think of it). She’s so shy, in fact, that she runs out of her audition without singing a single note of Sia’s “Chandelier,” which is my favorite song of this decade and made me spend the rest of the movie wondering if she was going to come back to it (she doesn’t). It’s a bad idea to spend so much of the movie not letting Meena sing because she’s arguably the most talented and there’s no point in keeping us in suspense about Grammy nominee Kelly’s voice. The kids at my screening went crazy for her, giving her a well-deserved ovation for her version of the late Leonard Cohen’s “Hallelujah.”

“Sing” is only 108 minutes long, but it felt like forever because the story is so predictable that I was waiting impatiently for it to hit the necessary plot points. Most of the jokes and songs are OK, but they’re not enough to save the movie from being uninspired overall. Kids who don’t recognize the formula will probably like it, but there are better options out there, like “Moana” in theaters and “Zootopia” at home.

“Sing” is rated PG for some rude humor and mild peril. Its running time is 108 minutes.