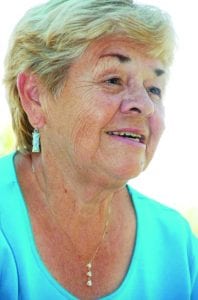 Mrs. Kolb was born July 24, 1934 in Pine Ridge, South Dakota the daughter of Charles F. and Josephine Z. (Jumping Eagle) Jacobs. She was enrolled in the Ogallala Souix Indian Tribe.

She was preceded in death by her parents; brothers Ronnie, Charles “Boy” and William, sisters Annabelle and Vae Rose and sons, Roger Pourier and Christopher Kolb.