Second period outburst earns Phoenix a sweep over the Sabers 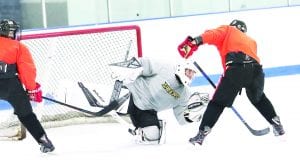 Goalie Zach Hale helped keep the Sabers in the hunt on Sunday with 13 first-period saves versus Phoenix. Photos by Lenny Kerbs

It’s too bad that the local San Diego Sabers couldn’t have just thrown out Sunday afternoon’s second period against the visiting Phoenix Knights.

Their first and third periods had been more than sufficient, with the Sabers definitely holding their own, matching the goal output of the opposition and proving to be quite competitive. But oh my, that second stanza was a crusher!

In what seemed like a flash, the Knights tallied on a pair of goals in just over sixty seconds and then tacked on another one 6:26 later to blow open a tight contest on their way to an eventual 5-2 victory at the Escondido Ice-Plex.

Sunday’s win culminated a most successful weekend for the Knights (14-17-2) as they swept the three-game series from the hometown Sabers, having taken the Friday night opener 6-1 as well as Saturday’s 4-1 tilt.

The fact that the Sabers (3-25-2) weren’t able to secure any points over the weekend was definitely disappointing. Lately, San Diego appeared to be generating some momentum and had been decidedly more effective on their home ice than they’d been on the road. What’s more, Phoenix was hardly a juggernaut, being ensconced in fifth place in the Western Division of the WSHL standings. But the hustling and aggressive Knights certainly didn’t play like a team that had been laboring. At the Ice-Plex, they came on like gangbusters.

But early in Sunday’s game, things looked promising for the hosts. Taking a timely feed from Biko Neuenschwander, Ondrej Imrich ripped a low hummer from the right faceoff circle that cleanly beat Knight goaltender Alexander Kinlaw and staked the Sabers to a 1-0 lead.

Able to kill off a couple of penalties thanks to the clearing and checking efforts of Imrich, Brad Larson and defenseman Michal Kolarik, the Sabers were able to maintain their edge. Goaltender Zach Hale also did his share, particularly on a poke-check that denied a breakaway, absorbing a blast by Chase Gillaspie that he confidently cradled to his midsection and finally turning aside an ice-skimming wrist shot from Ian McCollum.

And as time was winding down, it appeared as though the Sabers were destined to go to the first intermission up by a goal. But then late in the period, Cole Parker was whistled for a tripping penalty and with just 5 seconds left before the break, Phoenix’s Arunas Bermejo collected the puck off of a McCollum shot and did just enough to nudge it by Hale. For the Sabers, it was a deflating way to end the first 20 minutes of action particularly in light of how Hale had shined between the pipes while recording 13 saves. 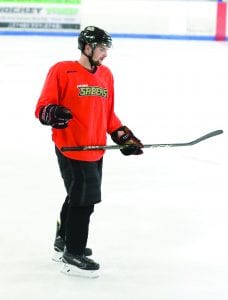 Defenseman Karel Kankovsky was his usual dependable self against the Knights as he produced a noteworthy all-around effort that included a pair of assists.

But the first period would pale in comparison to the offensive doings of the second. On a four-on-four situation with each team down a man, Saber Matt Saldano broke free on a breakaway. Despite being greatly harassed from behind by a pursuing defender, he gamely managed to get off a decent shot—but Kinlaw gathered the puck to his stomach and held on.

Shortly thereafter, the Knights had their chance and they made the most of it. While deftly controlling the puck, the ever-present McCollum did a masterful job of circling inside the blue line and when he found ample space, he unloaded with a low laser that clanked off the post behind Hale at the 15:52 mark.

Immediately thereafter, the Knights were buzzing around the net but Hale kept matters close when he came up with a trio of big saves that included smothering a shot to his belly, a nimble deflection and a short-side stop.

But alas, Phoenix continued to bring the heat and barely a minute after McCollum’s goal, Nolan Twerdoclib was left all alone on the doorstep and made no mistake by ramming home a shot past the helpless Hale. Now it was 3-1 for the guests and though there were still more than 15 minutes left to play, it was rapidly becoming a forgettable period for San Diego.

Hale was able to hold the fort temporarily when he stoned that man McCollum from in tight but soon the margin would grow even larger. Phoenix’s Michael Caravella, a heady and creative player, came right down the pike and after taking his time, he let go with a wicked wrist shot that hit the back of the net. Three goals in seven minutes-plus had placed the Knights in a most commanding position, if not the catbird’s seat.

Though the second-period scoring was done, the action was not. Late in the period, an altercation flared up between Phoenix’s Joseph Platt and Saber Reese Fegen. In Tier II Junior hockey, fights aren’t all that common and might even be considered to be somewhat of a rarity. In this bout, because he was clearly the instigator and got the drop on Fegen, Platt landed a couple of punches early. But to Fegen’s credit, he soon rallied and as the fisticuffs unfolded, he began delivering his own blows to the point where he was giving as good as he was getting.

As the third period got underway, the S.D. knew it was under the gun and came out with some real intensity and fittingly, it paid off. After accepting a nice set-up pass from Karel Kankovsky, defenseman Kolarik unleashed an amazingly accurate shot from inside the blue line that caught the top-right corner with just 27 seconds having expired. At 4-2, the Sabers were threatening to get right back into the fray.

Imbued with more jump and plenty of commitment, the Sabers kept pressing the action. Kolarik forced Kinlaw to make a solid save with another dangerous shot from distance. And then it was young Cole Parker’s turn and he narrowly missed drawing his team even closer. Showing terrific speed and stickhandling while on the carry, Parker crossed into the Phoenix zone and nimbly maneuvered around a defender before bearing down on Kinlaw. Arriving near the left post, Parker got off a close-in shot but Kinlaw made perhaps his most pivotal save (27 total) of the afternoon when he stuffed Parker’s attempt. In many respects, this was to be the Sabers’ last hurrah—though they continued to give dogged effort.

The outcome was sealed not long after Parker was blunted when Knight Jeff Solomon was the recipient of a good feed from across the ice and managed to slide the puck under Hale at the 13:36 mark which brought the final tally to 5-2.

It was understood that this was to be a building block season for S.D. because of the team’s makeup. In almost every game in which they play, the Sabers are clearly the more youthful and inexperienced club. And in the WSHL (and particularly in the Western Division), there are plenty of older and more seasoned teams. As a result, it is not at all surprising that the Sabers are going through some growing pains.

But improvement is apparent and there is definitely progress being made. Moreover, the Sabers bring legitimate effort to the task at hand and they never sell out. Their work ethic is real and consistent and ultimately, that will begin to paying dividends in the form of more victories.

And despite the loss on Sunday, there were a lot of encouraging signs. Imrich enjoyed a notable all-around game, whether he was on the attack or doing some notable work on the penalty kill or back-check. Kolarik proved to be a hard hitter and his shot from the point is more than bona fide.

Forward London Peters was quite active as he generated three good chances. And Parker was another who produced his share of positive shifts.

Moreover, blueliner Karel Kankovsky (two assists) continued his splendid play. A genuine talent who can skate, check, head-man the puck, stickhandles with dexterity and shoots with accuracy, Kankovsky distinguished himself with another solid outing.

And finally, there was Canadian Brett Lisoway who stood out in the third period with his hustle, willingness to engage and overall presence.

One thing’s for sure, these Sabers aren’t going to give in or capitulate. They’ll keep working at it until the results begin to match their effort. For a young team, getting better is generally an incremental process and that’s where the Sabers presently find themselves. But there’s some real upside here and eventually things will begin to turn record-wise. And when it does, the Sabers will remember the testing time, how they worked through it and the valuable lessons that were learned.