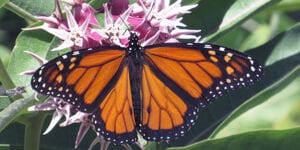 The colorful Monarch butterfly, whose population has drastically declined in the last two decades.

A letter written by a second grader at Conway School got the attention of Escondido Mayor Paul McNamara and led to the mayor reading a proclamation at the April 21 city council meeting committing Escondido to doing more to help provide habitat for Monarch butterflies.

The document he read was “Mayors’ Monarch Pledge Day.”

As recently as 20 years ago, billions of Monarch butterflies roamed California, adding beauty to an already gorgeous state. The Monarch’s population has declined by 90% since then, mainly due to the reduction of the plants that the butterfly needs to procreate: the milkweed.

The Monarch butterfly is one of the few migratory insects, flying great distances between summer breeding habitat and winter habitat where they are largely inactive. In the summer they fly as far as southern Canada and in the fall they migrate to the mountains of Mexico.

The proclamation urged residents of the city to do what they can to help Monarch butterflies flourish, mainly by planting milkweed. Nectar producing flowering plants also help the Monarchs.

The mayor commented at the end of his proclamation: “We do, in fact, read your letters, even if you are from second grade.”

At some future council meeting, the youngster who wrote the letter will be brought in to get a recognition from the council, said McNamara.