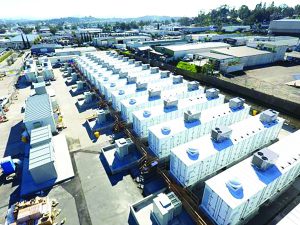 The 30 megawatt (MW) energy storage facility is capable of storing up to 120 megawatt hours of energy, the energy equivalent of serving 20,000 customers for four hours.

Escondido Mayor Sam Abed  declared: “Escondido is truly a great city and the completion of the world’s largest lithium ion battery energy storage facility is yet another example of how the City of Escondido is now a leader for our region and America.”

Most people don’t realize that electricity is produced at about the same rate that it is consumed, unlike, say, water, that, as it is produced, is directed into reservoirs for storage and later consumption. As the state relies more on renewable energy sources, such as solar, which, by definition, only produces electricity during the day time, electrical storage becomes more important.

As of 2016, by the far the largest source of off-grid energy storage has been, ironically enough, hydroelectric dam power generation.

A move to store electricity close to the place where it will be utilized could, if done widely enough, eventually do away with things such as brownouts and blackouts. 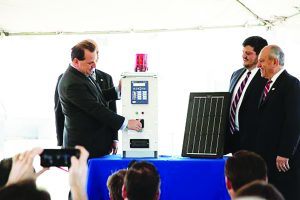 That is the significance of the storage facility that went on line Friday. It will enhance regional energy reliability while maximizing renewable energy use.

“San Diego County is a community of leadership and innovation, so it is only fitting that this community should receive the benefit of this unique project,” said Scott Drury, SDG&E’s president. “For more than a decade, SDG&E has been at the forefront to deliver results consistent with state and local clean energy and carbon emission goals. These projects affirm our commitment to deliver clean energy to customers and to provide a more reliable power supply to our electric grid when it is most needed.” 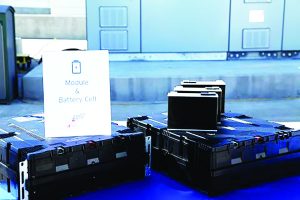 John Zahurancik, AES Energy Storage President said, “SDG&E is a leader in providing clean, reliable power to their customers, and we’re honored that they chose Advancion Energy Storage to serve their needs. These two projects, including the world’s largest advanced energy storage site, are the latest proof of energy storage’s capacity to scale up and solve our most pressing grid issues in a short period.” He added, “The scale and long duration of the project signals a new era for storage being deployed as flexible capacity.”

The 400,000 batteries, similar  to those in electric vehicles, were installed in nearly 20,000 modules and placed in 24 containers. The batteries will act like a sponge, soaking up and storing energy when it is abundant—when the sun is shining, the wind is blowing and energy use is low—and releasing it when energy resources are in high demand. This will provide reliable energy when customers need it most, and maximize the use of renewable resources such as solar and wind.

Energy storage is playing a key role in SDG&E’s commitment to delivering clean, safe and reliable energy. By 2030, the company expects to develop or interconnect more than 330 MWs of energy storage on the system. These projects can help support the delivery of more renewables to customers and help strengthen SDG&E’s record as the most reliable utility in the West.