The scene is a square of soil where “artifacts” are hidden away, waiting to be unearthed by grade school youngsters delighting at being little Indiana Joneses and Janes.

They sometimes wear pith helmets and dig with as much enthusiasm and curios­ity as any first year grad student. It’s fun and educational and teaches many skills and ways of thinking that children need in this age where knowledge of science is so vital to everyday life.

On Hwy 78, midway between Escon­dido and Ramona, a mile and a half east of the Safari Park, in the San Diego Ag­ricultural Preserve sits the San Diego Ar­chaeological Center, a place devoted to education and the preservation of human history. It is an independent non-profit founded as an offshoot of the San Diego County Archaeological Society.

It is the home to about 2 million arti­facts of humanity from Southern Califor­By nia, mainly San Diego County, some date back 10,000 years to the dawn of history in this region. The center, which opened in 2002, has about 1,000 collections, each ranging from 200-300 specimens. It is the only organization in San Diego County that actively curates archaeological col­lections.

Its mission is to preserve these artifacts and use them for educational purposes. The museum has a self-guided tour with volunteers who are eager to answer your questions.

“We have some of the earliest evidence of humans in San Diego at this location,” says Cara Ratner, MA, education pro­gram director at the center. She brings archaeology programs into the classroom and provides guided tours to field trips from area schools that visit the center.

The education programs are for chil­dren in grades K-12. She has a traveling archaeology program. The five-lesson program teaches kids how to think like archaeologists, including looking at maps where hidden “treasures” may be found or creating their own maps from a “dig.”

“Our education program uses archaeo­logical inquiry to foster understanding of past and present cultures, improve sci­ence education, and enhance citizenship education to help preserve our archaeo­logical legacy,” she says.

The education program has titles such as “make and take an artifact,” “observa­tions and influences,” “dating artifacts,” and “rock art exploration.”

In Dating Artifacts (for Grades 3-5), for example, students are taught about one of the techniques archaeologists use to date artifacts, stratigraphy. The law of stra­tigraphy determines that artifacts found deeper in the ground are older than those found closer to the surface.

Last October the Center’s “Archae­ology for Kids” program at a Title I school, Euclid Elementary School in City Heights, was featured as a KPBS national news story. The center’s pilot program had as its goal to teach students to think and act like archaeologists, in­cluding carrying out investigations and analyzing data.

She tells the Times-Advocate, “I bring dig boxes to the schools,” and the chil­dren are encouraged to use their powers of observation to come up with theories for what the artifacts they find mean.” The dig boxes include ancient artifacts, and tribal pottery and sometimes a “trea­sure” from Gold Rush days. When they find something interesting the students are asked questions like “what do you think this artifact is?” or “how would this have been used?” 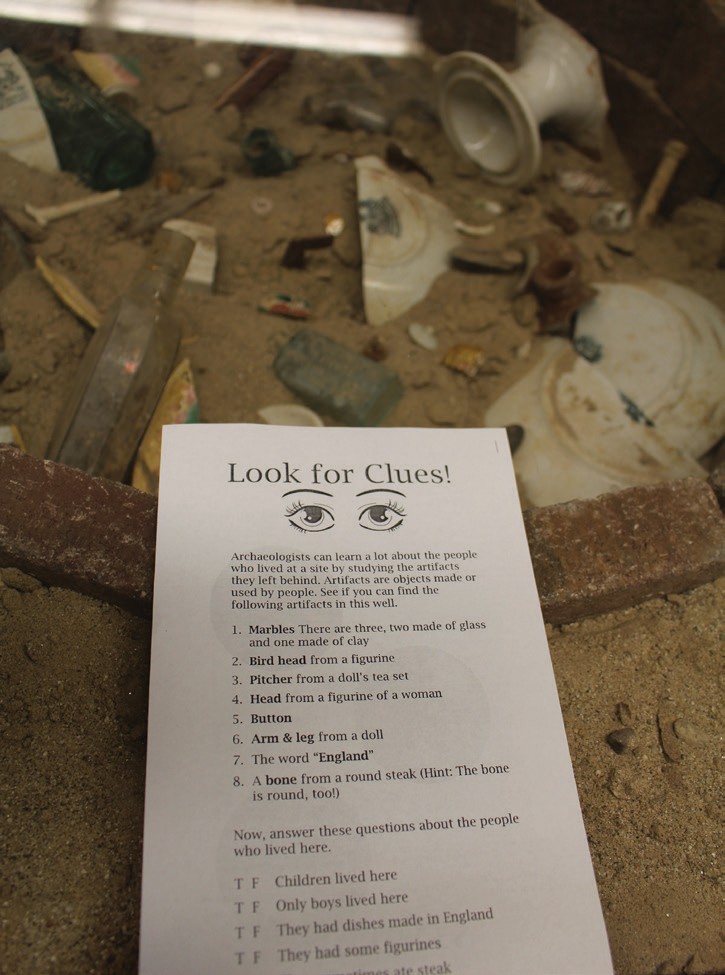 Children are given clues as to what to look for in a “dig”.

critically Observing and infer­ring, creating a hypothesis and testing it are essential tools for this generation to master,” says Ratner, who in 2014 was honored by the San Diego Science Educators Association for her contribu­tion in bringing science education to San Diego students.

Also in 2014 the center earned a Cali­fornia Governor’s Historic Preservation Award for being “at the forefront of pre­serving and supporting archaeological collections that are tangible links to the region’s cultural and historical identity.”

The center was recognized by SOHO (Save Our History Organization) in Oc­tober 2014. SOHO for “inventive exhibi­tions that spotlight people and moments in San Diego’s 240-year history” and as “keepers and interpreters of items and ma­terials left behind by people who roamed this area as long as 10,000 years ago.”

Ratner is a trained archaeologist with masters and bachelor’s degrees from the University of Nevada at Las Vegas. She worked as a field archaeologist for five years in Texas, New Mexico, Utah, Ari­zona, Nevada and California and taught; at which point she decided to “combine my passions” and seek work as an edu­cation director at a “state of the art” fa­cility, which the Center is. She moved to San Diego about three years ago with her husband, Rich and their dog, Baxter.

Baxter the dog is featured in one of the Archeology for Kids classes: Trash Detectives. They begin “with a story about Baxter the dog who created a lot of chaos at school one day. Each team will be given a trash can with a set of unique items tied to Baxter’s adventures, and will use scientific principles to fig­ure out what Baxter did that day.”

Although education is a major func­tion of the center, its primary function is as a curation facility, where items collected elsewhere can be stored and tabulated and indexed so that scholars from all over the country can come and examine them and use them in their own research. It is also a place to share items with the public.

It’s “one of the best if not the best” curation facilities in the country, Ratner says.

“People come to us to find out how to curate collections.” What makes it so good? The storage system, for one, which stores specimens in acid free box­es in a hermetically sealed room. “We are the model,” she says. “These things are meant to be cared for forever.”

At the same time it is a collection that is very open to research by students, lo­cal residents, writers, and even people interested in old bottles. “We have a research library with specimens going back to the 1800s. If you are doing an article about archaeology or the history of San Diego we are a great resource!” says Ratner.

The center is located in an old elemen­tary school building that was formerly used by the San Pasqual Union School District. Now owned by the California State Park system, the building is pro­vided for free to the Center, which in turn provides curation services to the state and the federal government.

The exhibits range from collections of obsidian blades used for spears or for scraping to grinding stones (called metates) to collections of bottles going back a couple of hundred years. Anoth­er exhibit shows a variety of stone tools used by inhabitants thousands of years ago.

One of the most popular is on “ollas” or giant pots.

Often the volunteer staff will hear a visitor exclaim, “My grandma had this bottle!” or “My mother had a plate just like

A metate or grinding station at the San Diego Archeological Center.

Children (and adults) are encouraged to get hands on experience in how hunter gatherers (the people who make up 99% of the history of mankind) ground nuts and grains and acorns into an edible form. They learn how to process seeds into a us­able flour using stone tools.

Visitors can also learn how to choose the right size stone tool for grinding or as a pestle.

Children are fascinated to discover “that people of the past were the same as you and me in wants and needs,” says Ratner. “They love to learn how to tell the story of people in the past by looking at things they used. Looking at a stone tool we can tell where it came from [by noting what kind of rock it is] and speculate why did they travel so far? They were wanting to get more out of life.”

They might see a tool that wasn’t skill­fully done and conclude that a child did it, perhaps under the supervision of an adult, which would show that adults cared enough to tutor their offspring in the cre­ation of tools.

“I truly believe that people were just as intelligent as us, they just did things dif­ferently,” she says.

The center will offer two tours in the next few months. They include a Flint­knapping Workshop Saturday, May 7 10 a.m.-2:30 p.m. Flintknapping is the pro­cess of turning a piece of flint into a blade by knocking (or knapping) away pieces of the stone.

The other is a summer tour that will be held on Saturdays in June and July and will include a “trek to coastal rivers and valleys to learn about how maritime re­sources were utilized.”

Last July the center held the local re­gion’s version of the Antiques Road Show entitled “Antique or Junque” in which local experts evaluated “stuff” that the locals brought to them to determine if they should try to sell them or throw them away.

The center changes featured exhibits from time to time. In a few months a new one will open on Fort Guijarros, a fort built on Ballast Point in 1797 by the Span­ish to defend San Diego Bay.

A permanent exhibit is on the area’s 10,000-year history.

The Center has a Speaker Bureau that offers presentations on the following sub­jects at the Center itself, or at your loca­tion. These 45-minute lectures include a slide show and a question and answer period.

Topics include: 10,000 Years: The Ar­chaeological History of San Diego, Hunt­ing and Gathering: Shared beginnings, The Science of Archaeology: How We Know What We Know and The Archaeol­ogy of Childbirth.

By the way, in the world outside of the classroom and the museum archaeology is a science best left to the professionals. “If you find an artifact,” says Ratner, “just take a picture of it and show the picture to an expert.” Do NOT pick up the object and bring it with you, because by that act of disturbing the artifact you have destroyed its value since it will now be impossible to prove where it was found. “If you have found it, somebody probably already found it and left it there,” says Ratner.

San Diego Archaeological Center is located at 16666 San Pasqual Valley Rd., Escondido, CA, 92027. Admission is $2 for individuals and $5 for families. Hours are 9 a.m.–4 p.m. Monday–Fri­day, 10 a.m.–2 p.m. on Saturday. Visit www.sandiegoarchaeology.org for the latest. If you are interested in an educa­tional program, contact Cara Ratner at cratner@sandiegoarchaeology.org.