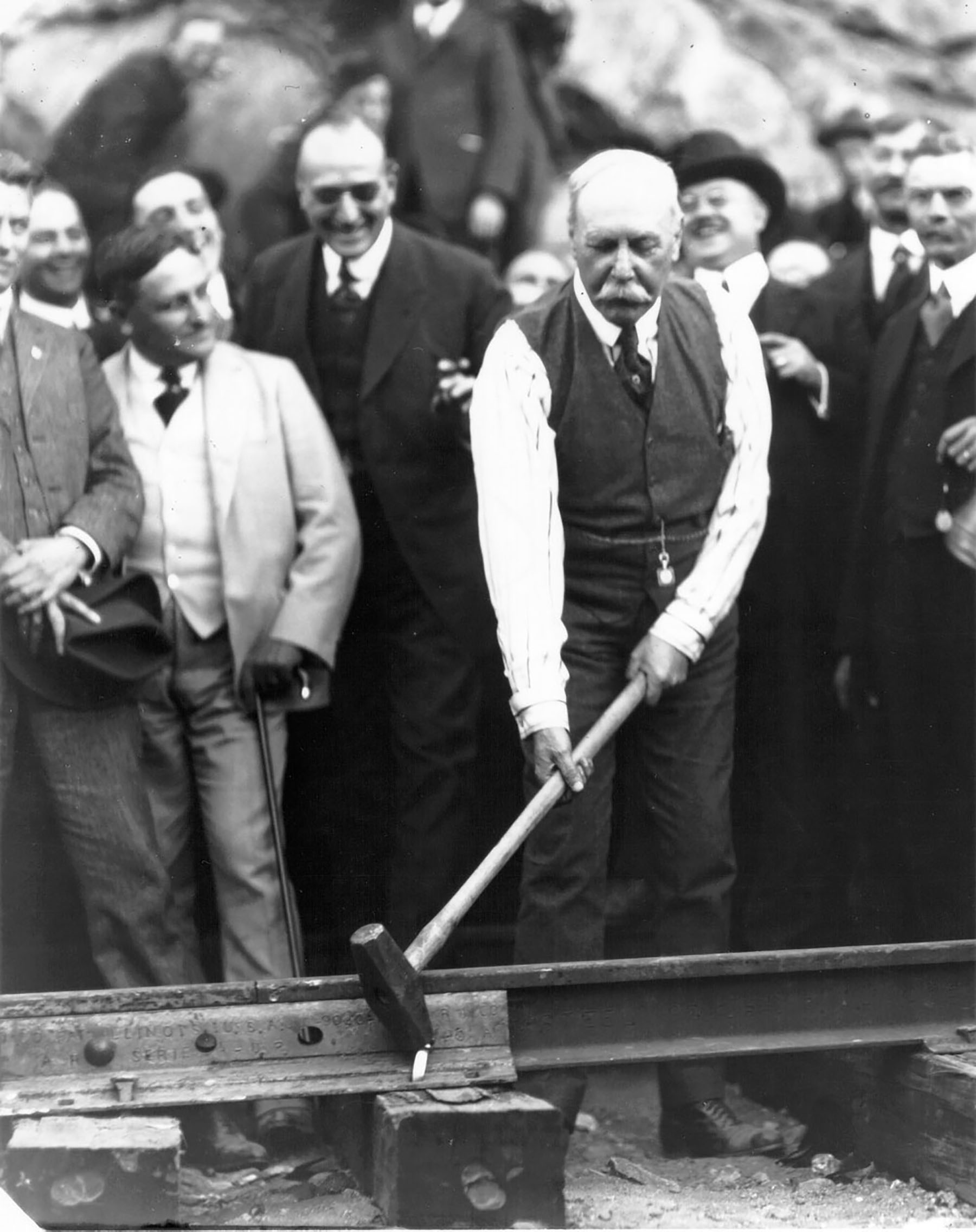 John D. Spreckels driving the golden spike that was the final spike in the San Diego & Arizona Railway (SD&A) in 1919.

The Pacific Southwest Railway Museum Association (PSRM), a San Diego-area historical and educational nonprofit, will host a free presentation about the history of railroading in San Diego County at 11 a.m., Saturday, June 8, at the San Diego Archaeological Center, 16666 San Pasqual Valley Rd., Escondido. Admission is free. The public is invited to attend.

Speaking will be Reena Deutsch, PSRM volunteer and board member with the Anza-Borrego Desert Natural History Association and San Diego Model Railroad Museum in Balboa Park. Deutsch is author of “The Impossible Railroad.” Book signings will be available.

The presentation on June 8 will include information about PSRM’s current, year-long 100-year centennial celebration of the November 1919 completion of the San Diego & Arizona Railway (SD&A), as well as details about a reenactment ceremony at PSRM’s Campo Railroad Park and Museum to be held Saturday Nov. 16, 2019.

The presentation on June 8 also will feature slides of old photos and stories about the 1919 completion of SD&A, which was financed by entrepreneur John D. Spreckels at a cost of $18 million, or roughly $123,000 per mile.

The SD&A rail line was called the “Impossible Railroad” by engineers of its day due to the immense logistical challenges, which included extreme terrain requiring 2.5 miles of bridges and trestles and 21 tunnels, including 11 miles through the treacherous Carrizo Gorge, an area where cliffs dropped more than 1,000 feet to the bottom (17 of the 21 tunnels were located in Carrizo Gorge). Additional construction challenges included floods, landslides, fires, hot weather, deaths from the flu, sabotage by Mexican revolutionaries and various delays caused by World War I.

Stretching 148 miles from San Diego to El Centro, the SD&A included 44 miles in Mexico and took 12 years to complete. On Nov. 15, 1919, Spreckels himself drove the final “golden spike,” which he accidentally bent. As the country’s final transcontinental railroad, the SD&A established a direct transcontinental rail link to the east by connecting with the Southern Pacific Railroad in El Centro. Previously, San Diegans had to travel north to Los Angeles to connect with an east-bound train.

The Pacific Southwest Railway Museum Association (PSRM) is a non-profit, all-volunteer educational organization dedicated to the preservation and interpretation of railroads as they existed in the Pacific Southwest. Every weekend, the public can enjoy vintage train rides aboard full-size, restored locomotives and train cars from the early 20th century at the 19.5-acre Campo Railroad Park and Museum in Campo.

With more than 120 pieces of equipment and artifacts on display, PSRM provides a unique learning experience for all ages. PSRM is currently celebrating a year-long 100th centennial anniversary of the November 1919 completion of the San Diego & Arizona Railway (SD&A), the last transcontinental railroad built in the U.S. The centennial anniversary will conclude with a special reenactment ceremony and other celebratory activities to be held Saturday Nov. 16, 2019 in Campo. For more information on PSRM, visit www.psrm.org.

For more information, call the San Diego Archaeological Center at (760) 291-0370, or visit sandiegoarchaeology.org/2nd-sat-the-impossible-railroad/.