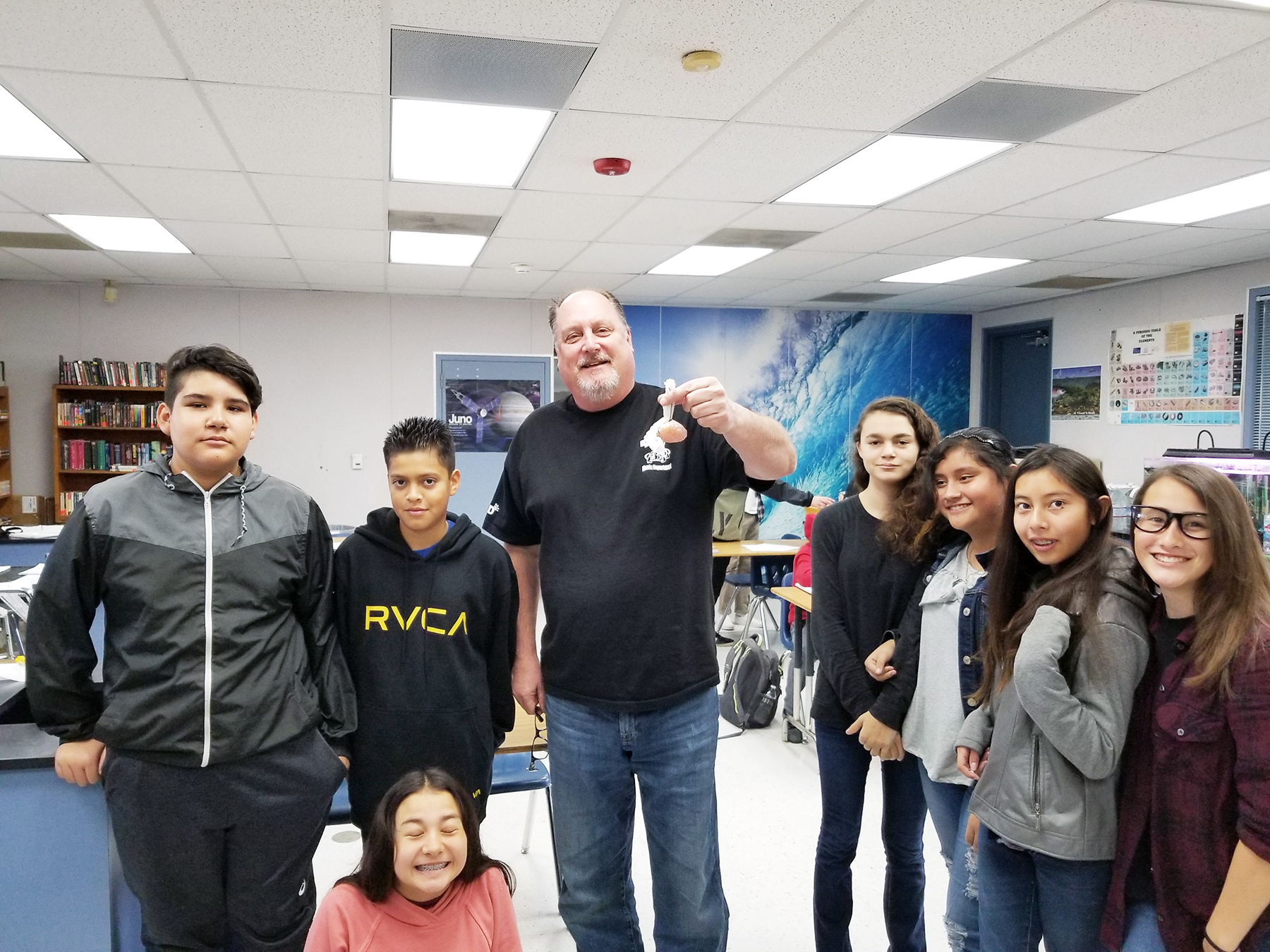 Over the next month, North County schools will be releasing classroom-raised trout into Lake Miramar to conclude the Escondido Creek Conservancy’s Trout in the Classroom program. Thanks to sustained funding from SDG&E, the program has expanded over the years.

When it was first funded in 2016, it launched in three schools. Now, in 2019, the program has aquariums in nine schools throughout North County.

The latest school to dive in is Rincon Middle School in Escondido. The 8th grade science teacher at Rincon, Bruce Peterson, is very enthusiastic about Trout in the Classroom. “I’ve always wanted to do this program, so I’m glad we’re finally able to do it,” said Peterson. “The students are loving it! These are 13-, 14-year-old teenagers, so with some things we try to teach them they couldn’t care less, but they’re really excited about the trout. And the environmental piece is great.”

The students will have raised the fish in their classroom for eight weeks.  During this time they watch them hatch in their aquariums, then see them transform from larvae into competent swimmers as juveniles, before releasing them into the wild during a field trip to Lake Miramar.

One of the reasons the program targeted 8th grade when expanding into new schools this year is because this is a grade that rarely receives nature-based field trips.  Peterson commented, “We’re excited about the field trip because we don’t get to do that very often. It’s a bonus. Some of these kids have never even seen the ocean, so it will be great to get them outdoors. This is huge for them.” 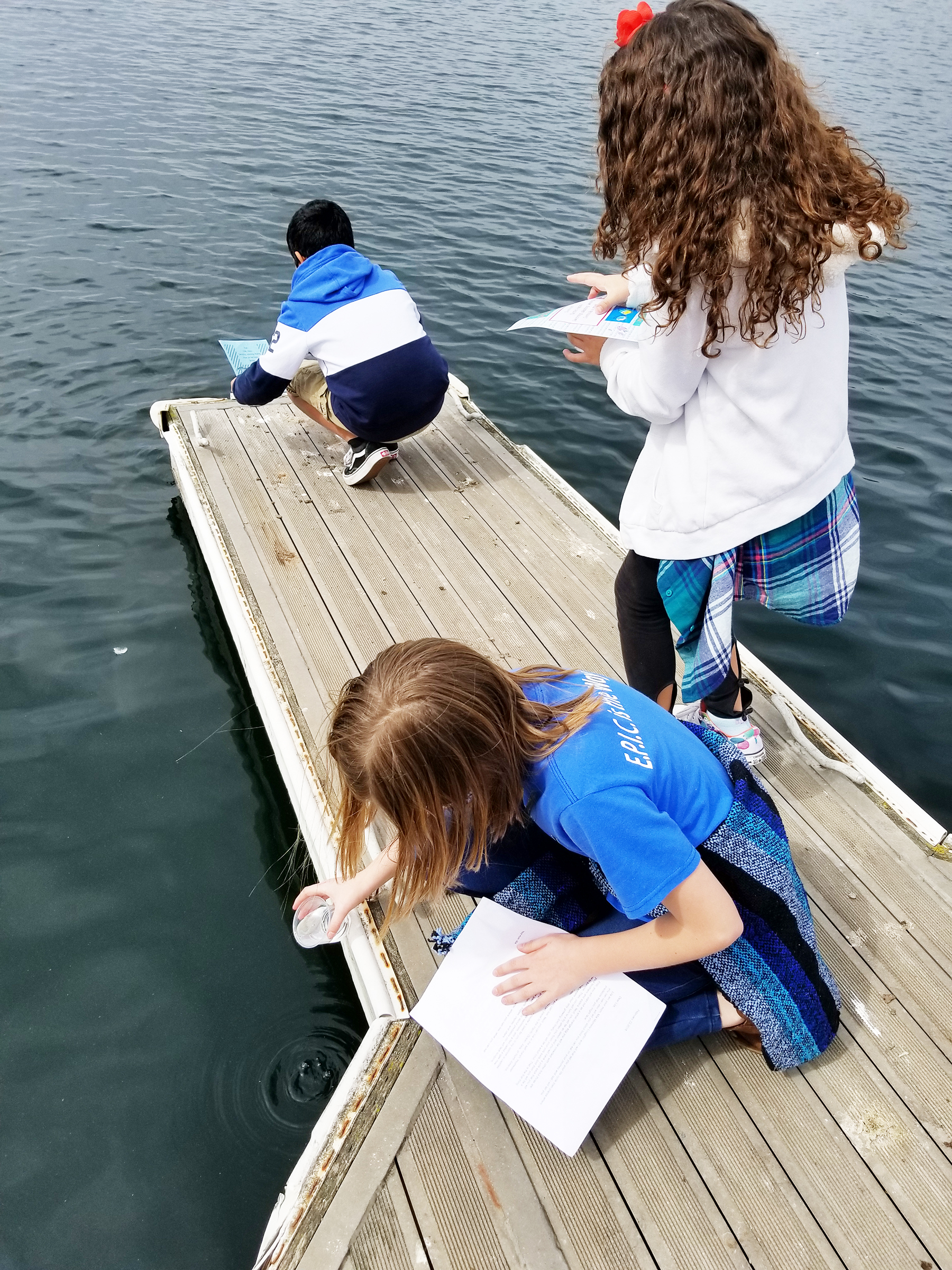 Rincon Middle School students release trout that they raised into Lake Miramar. While releasing in Lake Miramar is nice, they would prefer to release the trout into the Escondido Creek watershed someday.

The Trout in the Classroom program is full of valuable lessons. Not only do students learn to raise and care for a delicate living thing, they also learn what this species needs to survive. In doing so, the children discover the importance of watershed health, and they become motivated to engage with the world around them as they become advocates for Escondido Creek.

“While releasing in Lake Miramar is nice, we’d prefer to release our trout into the Escondido Creek watershed someday. Southern steelhead trout were once abundant in Southern California creeks and rivers. Sadly, habitat degradation has decimated their population. Human impacts like runoff, litter, dams, drought, and climate change have pushed this species to the edge of extinction,” said the program’s Education Manager, Simon Breen. State regulations control where trout releases can occur and, at the moment, release into the Escondido Creek watershed is not allowed. The Conservancy hopes to change those rules in the future.

“Even if the water quality conditions were perfect, trout in the Escondido Creek would be unable to freely move up and downstream due to barriers in the creek. But with a new generation of youth in our community becoming savvy about watershed health thanks to this program, we’re optimistic our future will feature a trout-filled Escondido Creek,” said Breen.