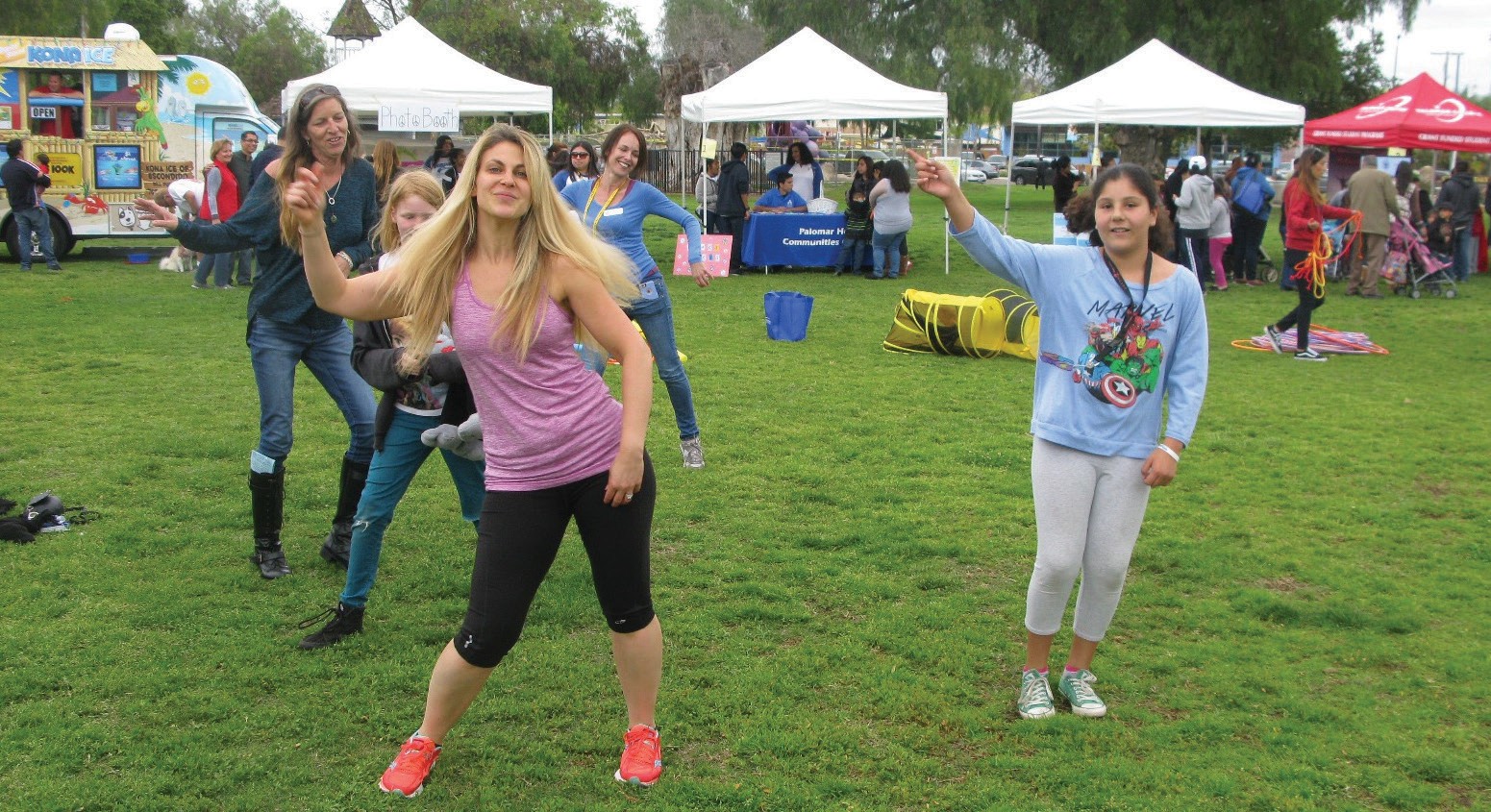 Harmony prevailed for a time at Grape Day Park last Saturday as the Es­condido Union School District took aim at improving student outcomes with the Peace Begins with ME Festival.

The sixth annual festival is part of the district’s Season for Peace and Nonviolence theme that runs from Jan­uary 30 to April 2 this year. During that period all district schools host activities to promote domestic tranquility such as peace walks, assemblies, and com­munity service projects, according to Kimberly Israel, community outreach coordinator.

“We are honoring and celebrating kids who are making good choices,” she said. “Sometimes we focus too much on kids who aren’t doing so well.”

Israel said the Escondido Education COMPACT was partnering with the dis­trict on a five-year grant. “This is a big program that they are helping us put on,” Israel said, before she set off to do a lively version of Kids Zumba.

The COMPACT coordinates a number of programs related to at-risk students, in­cluding youth leadership, career planning, educational services, drug use and violence prevention in schools and several others. It also coordinates with Escondido’s high school district.

Fuen Lopez of North County Health Services of the San Diego County Office of Education was talking to passersby and handing out pamphlets as part of a “na­tional program supporting migrant kids to make sure that they graduate,” as part of the county’s Migrant Education Project.

Next door, staffers from the EUSD Nu­trition Services were showing how much sugar is in a number of beverages. For example, Starbucks’ Frappacino has 45 grams, which equals 10 teaspoons. The nutritionists measured white sugar into clear cups, showing just how much sugar that looks like.

EUSD Director of Nutrition Gail Gou­sha said the kids’ favorite is not pizza, but “100 percent whole-muscle chicken nug­gets, that have no antibiotics, no nitrates, no nitrites and no hormones and all of our

foods are moving in that direction.”

All of the service’s flour ingredients, “everything from the breading on the chicken nuggets to tortillas is pretty much whole grain,” she said.

“We’re changing all of our foods to be cleaner foods. We have salad bars at all of the elementary schools and they’re eating from (them) very, very well,” she added. “We’re just very proud of moving more fresh foods than in the past and they are eating them.”

Verna Sundquist, a member of the Baha’i Faith worked at the “One Light Many Lamps” booth. “Kids make brace­lets to express the love between faiths” she said. The bracelets had a colored bead for each of seven religions of the world, Baha’i (yellow), Buddhism (purple), Christianity (dark blue), Hinduism (pink), Islam (green) and Judaism (red), and the Center for Spiritual Living (light blue) and God (clear).

“We’re trying to organize things in communities so we can get different faiths and different people together to promote peace,” Verna said.

There followed a martial arts demon­stration, and a visit by the Escondido Po­lice Department’s Canine Unit.

The Escondido Police booth handed out brochures and large illustrated cards with instructions for picking up and drop­ping off students, properly fitting bicycle helmets for children, refrigerator magnets with phone numbers for police business, a graffiti and Tip lines, plus a brochure on pedestrian laws.

Aaron Lietz was initialing green-col­ored cards for students who came to his Palomar College booth. Students who filled the cards were eligible for a drawing later in the day. Lietz works at the Educa­tional Opportunity Center at the college.