‘My run is about giving every student what they need.’ 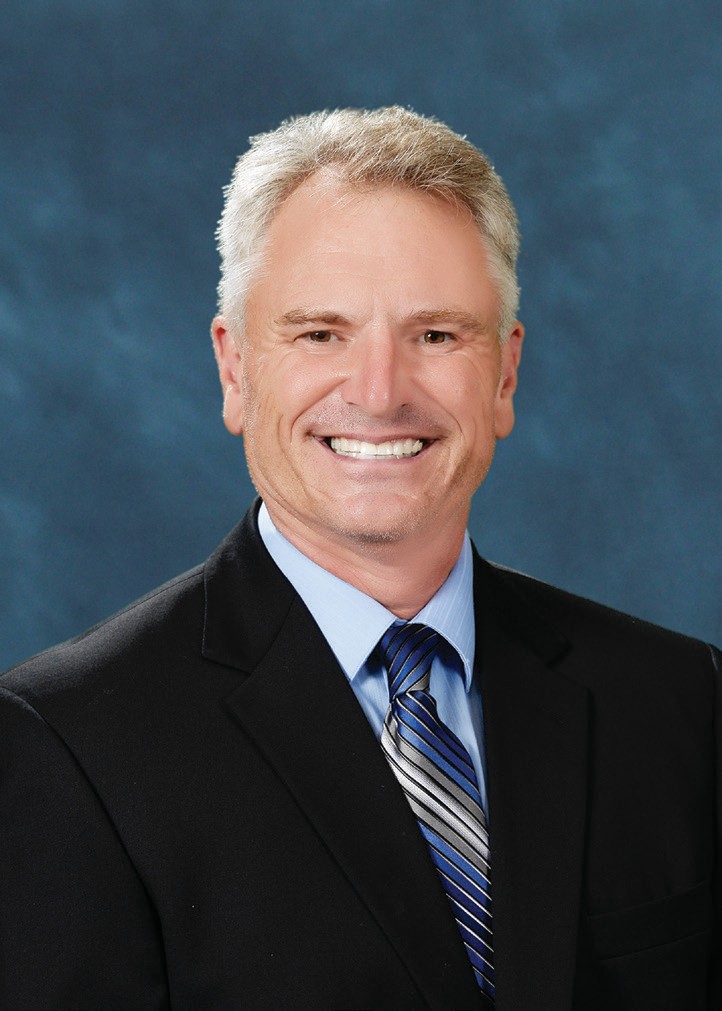 Doug Paulson, who has taught at Orange Glen High School for about a decade, is running for the open seat in District 1 of the Escondido Ele­mentary School District, the seat just vacated by the resignation of Jose Fragozo.

Friday night his supporters held a rally as he announced his candidacy on the steps of Escondido City Hall, where candidates traditionally toss their hats into the ring in the Hidden Valley.

“It was nerve wracking,” says the new candidate. “People filming me with their phones got to me. I have no experience in politics.”

Paulson has been in education for 20 years. He is a native Escondido man, born and raised, who graduated from Escondido High School.

At OGHS he has done a variety of teaching jobs, including teach­ing English, running an after school enrichment program and as an atten­dance officer (the latter-day equiva­lent of an old-fashioned truant of­ficer. He visits stores, residences etc. to encourage students to attend school. He is also involved in the school’s WASC accreditation ef­forts.

He grew up in what is now Hidden Meadows, one of the original fami­lies that lived there. He attended Cen­tral School. “That was the school that had all the poor kids and was also the most ethnically diverse school. But the district put everything into that school.” As a result many successful people came out of Central School. “Percentage-wise we have all done pretty well,” he says. ”That’s the power of giving every student what they need. That’s what my run is all about. Giving every student what they need — so they can reach their dreams — whatever that is.”

Later he became a deputy sheriff, a park ranger with the National Park Service at Yellowstone and Grand Canyon National parks and at Ban­delier National Monument in New Mexico. He served as park ranger, EMT and fire officer.

As part of the Peace Corps he went to Argentina where he helped set up a provincial park system and helped create a park ranger acad­emy, the Mendoza State Institute for Parks Training, an accomplishment that he holds as among his proudest achievements. The park includes the highest peak in the Western Hemi­sphere: Aconcagua.

He married a native of Uruguay and returned to the states with two children and the realization that he needed a different career, one that would allow him to be nearer to his family.

He was first hired as a teacher’s aide at Valley High School, the Es­condido High School District’s con­tinuation school, and saw, “really good things going on. I saw a home for myself.”

He became a high school teacher, teaching just about every subject, but with an affinity for helping at risk students. “I liked making a con­nection with kids and decided that every kid, once you get a connec­tion, will do well and can do well.”

His focus throughout his career has been students who others believe to be at risk. “I believe all students are at risk at some level,” he says. “I work with kids who have difficulties, sometimes with drugs, home 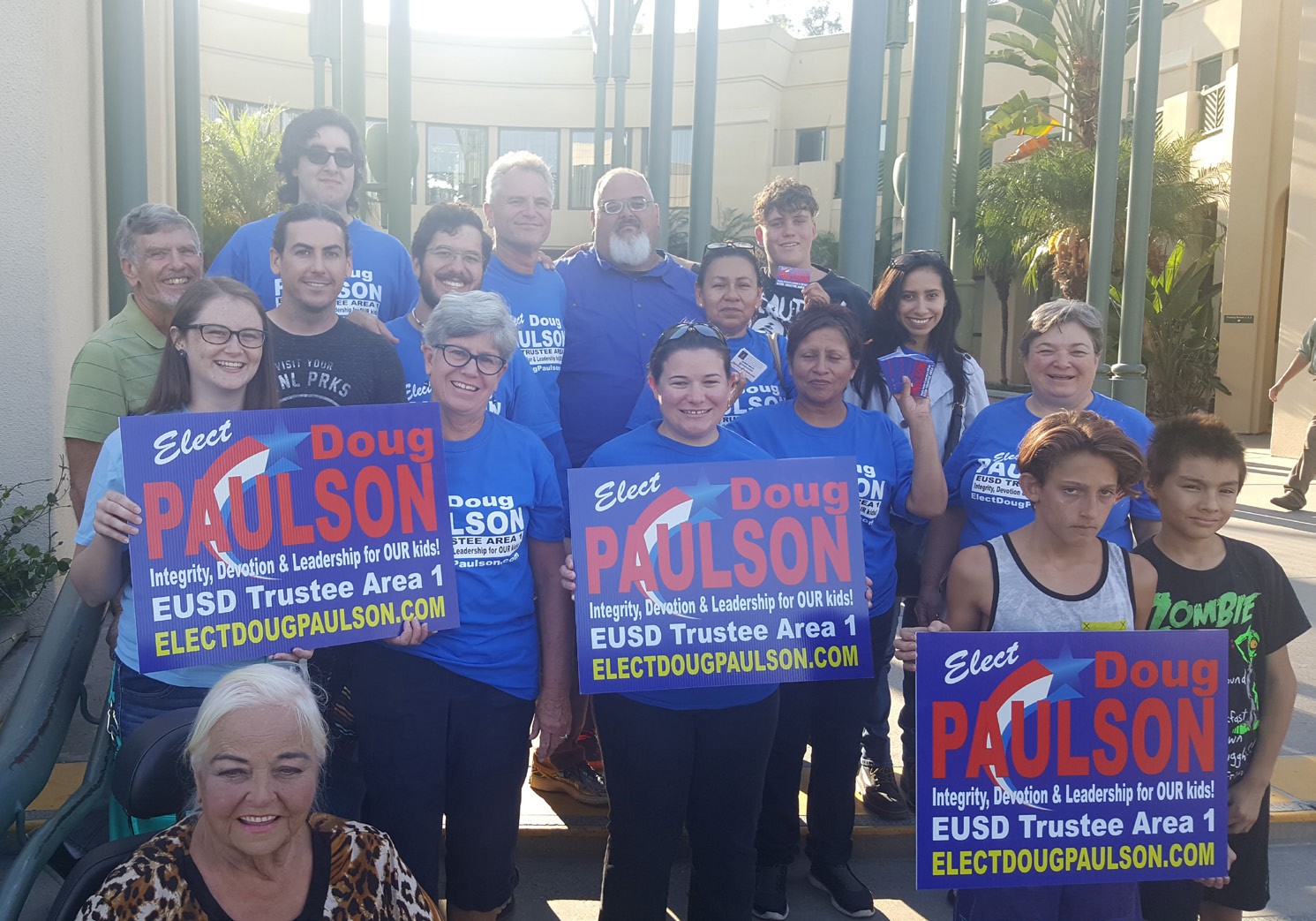 situa­tions and criminal backgrounds.” He also helps students who are English learners, who sometimes have learn­ing disabilities that remain unidenti­fied because of their initial problem of learning English.

Which brings us to what candidate Paulson wants to do if he is elected to the elementary school board. “The biggest challenge in students in my District 1 is the fact that a large per­centage lives in poverty. That affects their ability to be highly successful. They don’t get the advantages of field trips to Balboa Park, or trips to Hawaii. They don’t get the enrich­ment that other kids get. Living in poverty is a huge problem for our students.”

He says, “That is my focus. Not turning our backs on kids who are high achievers, but realizing that some kids need a little more to be successful in the classroom.”

He points to an extremely success­ful program that he has been a part of at OGHS, a parent education pro­gram. It is held in Spanish and be­cause most Hispanic parents work in the daytime, it is held at 7 p.m. The school district provides the food and the parents come out.

“Our parents care deeply about their kids’ education,” he says. “That’s why they are so determined to come to this country, so that their kids will get a good education. Un­fortunately, they often have no idea what is needed in order to do that.” Classes such as these classes for par­ents help give them the tools to as­sist their children become successful learners.

Realizing that not all children will or should attend college, Paulson wants to assure that students have the skills that they need to be able to attend if they want to. “These are the same skills that are needed to be successful in life.”

Paulson wants the Escondido El­ementary School District, “to help kids develop that dream. Now that dream may change every two weeks. But once they are working towards that dream, discipline problems dis­appear and whatever challenges they face they can overcome.”

He also sees himself in the role of “calming the waters” on the school board, which has, he says, seen a lot of controversy in recent years.

“When I was a ranger in New Mexico we had to deal with many tense situations, that often involved dealing with members of the Indian pueblos who would cross into fed­eral lands to hunt. They considered they had a traditional right to hunt on those lands, even if federal law said otherwise. “I got a lot of experience in conflict resolution,” he says.

“My core belief is that everybody wants the best for all the children. All we need is to approach that in a professional manner and use facts and reason. Not based on gut feelings or what people are yelling at but on facts and reason. Whenever an ad­ministrator says ‘We are going to do something because research says it is so,’ I’m going to be checking the re­search.

“Whenever I hear ‘Research tells us something I hold my tongue but check the research.”