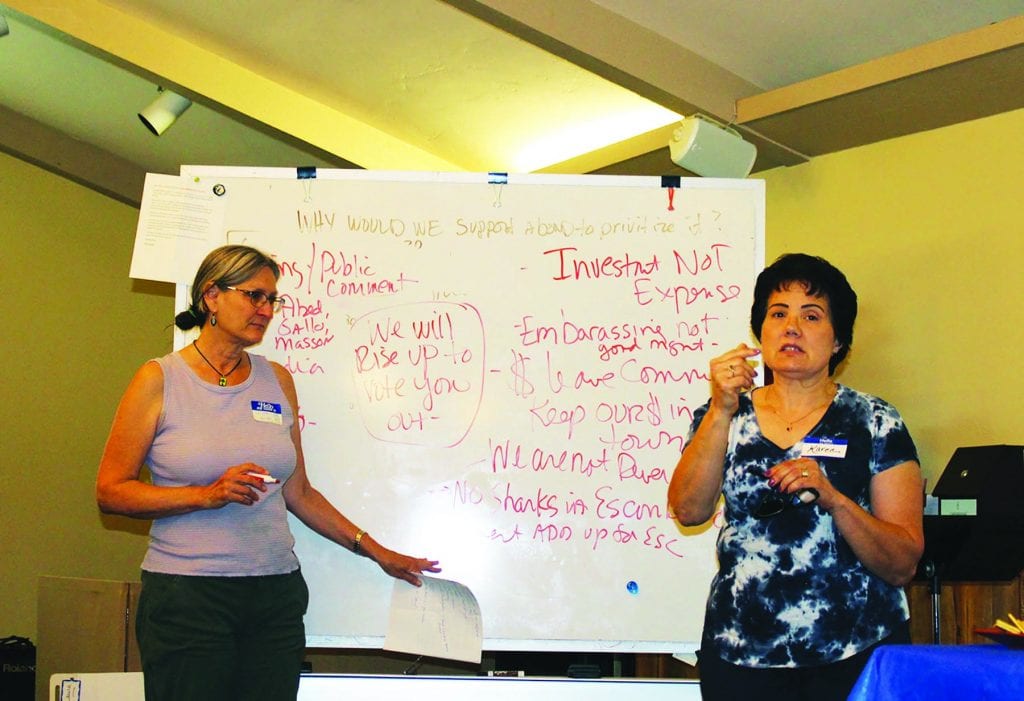 Laura Hunter (left) and Karen Tatge, speakers at Monday night’s meeting to oppose the privatization of Escondido Library write slogans on the white board that include emphatic talking points for the Escondido City Council such as “We will rise up and vote you out” and “No sharks in Escondido.” The white board also include names of targeted city council members: Ed Gallo, John Masson and Mayor Sam Abed.

“Who wants to rabble rouse in the streets?” asked the lead speaker of a group of Escondido residents who formed to resist the idea of privatizing the Escondido library—the most used facility in the city.

The speaker, Laura Hunter—a self-described “neophyte” in organizing a political movement—towards the end of the two-hour meeting Monday night asked the question in jest. But the quip captured the temper of the nearly 100 people filling the seats of the Chalice Unitarian Universalist Congregation—which, while composed of mild mannered library supporters, carried more than a whiff of subdued fury. Anger against the idea of giving the library over to Library Systems & Services (“LS&S”), a private company based in Maryland that specializes in taking over libraries from public entities and running them more inexpensively than the city or county could.  A company that one member of the audience referred to as being owned by “vulture capitalists.”

The city of Escondido has begun a study to determine if privatizing the services of the city library by hiring a private company to run it would save a significant amount of money.  The city faces ballooning pension payments in the next four years and the city manager is looking at ways to cut costs.  The meeting Monday night was a reaction to that process—with participants clearly convinced that the decision has already been made.

The meeting was put together by a group that regularly meets on the last Monday of the month at the church, “Escondido Indivisible,” in cooperation with “Neighbors in Action,” and the Escondido Democratic Club, plus some who described themselves as “Nasty women.”  Despite this progressive political leaning of many at the meeting, the main speaker emphasized that support for the library isn’t “a progressive or a conservative cause, it crosses political lines. I think they are all concerned.”

They started the meeting by passing around a petition “to thwart the privatization of the library.” They spent a few moments discussing who could sign it. At first, they limited it to Escondido residents, and then several people who live outside of the city but who use the library said they wanted to sign it. Finally, they decided that basically anyone could sign it. 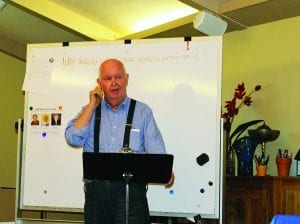 Besides “rabble rousing” and demonstrating in front of the library and at city hall, the group began working on assembling a list of speakers to talk at the next city council meeting, to flood area newspapers with letters to the editor, to meet with the Union Tribune editorial board, to try to get TV news stations interested, and to collect signatures from people opposed to privatization.

“Our library is sacred, as sacred as apple pie,” said Jackson later, parodying a statement that was quoted by the evening’s keynote speaker, Whitney McCoy.

McCoy, an Escondido resident was quoting (and not with admiration!) the founder and former CEO of LS&S, Frank Pezzanite, who is now retired and who said in 2010: “There’s this American flag, apple pie thing about libraries … Somehow they have been put in the category of a sacred organization.”

McCoy told The Times-Advocate after the meeting, “In context, he was arguing against the public perception of libraries as sacred institutions, but our group feels that is exactly what they are, and we are preparing to fight to protect ours!”

McCoy, who is in her last semester to finish her master’s degree in library science, gave the group the results of research she did on LS&S. “This a clear and present danger to our last remaining library,” she said. She said she was amazed when she realized that LS&S was a company she had been taught about in college. “It was a surreal moment,” she said.

She noted that libraries are funded by the public. “It’s our taxes going to the libraries that we use,” and added, “The library is not an expense—it’s an investment. For every dollar that is spent on the library the public gets back five dollars in economic value.”

There was a moment of unintentional humor when McCoy stepped backwards and almost fell off the riser where she was speaking. She recovered quickly and quipped, “I’m so passionate that it blew me off the stage!”

She said that in a world where many people distrust government at all levels, “libraries enjoy a high level of trust,” she said.

She attended the meeting July 11 where LS&S spoke to the Escondido Library Board of Trustees, (which advises the city council on library matters) and explained one way they save money. “They focus on the best sellers and pull the less popular books,” she said. This removes books from the shelves that are representative of less popular views. “This is at odds with what libraries do,” she said.

She described librarians as “highly educated civil servants. They live here. They are part of the community.” If LS&S is contracted to run the library the percentage of librarians with MA’s in library science will decline, she claimed.

She argued that one function of librarians is to provide programs for the “marginalized, disenfranchised and overlooked,” and that when a library is outsourced such programs will fall by the wayside.

The Escondido Library first opened in 1894. The most recent figures for usage by the library is 447,827 visits annually or 1,435 per day.

“If no one uses libraries, as so many claim, how does our little library have that many visitors a day?” asked McCoy. She added that last year 17,133 people attended 410 programs and that there was 80,360 uses of the library’s computers each year. 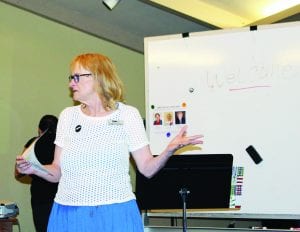 The total collection in the Escondido Library is about 200,000 she said, and declared that many of those volumes would be gone if LS&S is awarded a contract to operate the library.

McCoy discussed the County Grand Jury report released in March which gave the city low scores for serving its library population. “It determined that the library had not grown sufficiently to meet the current needs,” she said.

Editor’s note: It should be noted that the city disagrees with the Grand Jury and in a reply June 12 wrote: “The City would respectfully submit that the finding that ‘library programs do not meet community needs’ is a conclusion that is not necessarily supported by a fair assessment of all relevant facts.” The city’s response can be found at: www.escondido.org/Data/Sites/1/media/PDFs/library/response.pdf?v=2

The library’s budget makes up about 3% of the total city budget, McCoy said. A study of the library’s budget for the past few years indicates that the library hasn’t spent its full allocation. “Then why do we need to trim the fat if we aren’t spending everything that’s allocated?” she said.

If the library isn’t spending its full allocation, that means the extra money it is spending will end up in the pockets of the Maryland-based LS&S. Among library professionals, she said, LS&S I’ “is considered to be an opportunistic shark that preys on failing cities.”

McCoy did note that the American Library Association did a report on LS&S which in the 1990s took over management of the Riverside County Library’s 37 branches. It was a generally favorable report, she said. “The ALA found that Riverside made the right choice.”

Readers can find this report at: www.ala.org/aboutala/offices/ors/outsource/outsourcing

McCoy pointed out that the situation in Riverside—where the county was hard hit by the closing of March Air Force Base, and lost a significant amount of its funding—was much different from Escondido. “That’s not the situation here,” she said. Even so, library employees and patrons in Riverside weren’t necessarily favorable towards having a privately-run library.

For example, only 56% of the Riverside library staff thought their work schedule enabled them to get their work done in an appropriate manner. Staff turnover was high among newer employers. Moreover, Escondido’s one branch has 11 ALA accredited professionals with master’s degrees in library science, compared to 37 branches in Riverside with 36 librarians with those credentials.

“Privatizing a public library is a red flag for a local government that is derelict in its duties to its citizenry,” said McCoy.

At the end of her presentation one man in the audience declared, “I believe they have already made the decision and it’s all signed and delivered.”

Another added, “If we wait until the council is voting on it, it will be too late to have an effect. Now is the time to have an impact, not later.”

Several audience members recalled the process when the city closed its East Escondido Library branch in 2011. This was also sold as a budgetary measure, in spite of the fact that 70,000 people visited the branch each year—even though it was only open three days a week.

Karen Tatge, president of the Escondido City Employees Association, told the group that the city council in 2007 put itself in the situation it now faces of CalPERS (the California pension plan) payments that will require the city to find $20 million additional funding over the next four years.

She said this is one motive for privatizing the library, since any new employees hired wouldn’t be under CalPERS, but would be paid by LS&S, without benefits. “So, when LS&S says that it will hire all of the existing employees of the library—big whoop!” She added, “The part-time city council members get CALPERS but these library hires would not.”

Within the space of two hours Monday the group began formulating their plan for action. This includes flooding the next meeting of the Escondido City Council on August 15 with speakers, picketing city hall, and threatening the three city council members up for election next year, Sam Abed, Ed Gallo and John Masson with working to vote them out of office.

Members of the audience threw out handy slogans that were then written on a white board. They included: “Libraries are an investment, not an expense,” “Keep our money in Escondido,” “People of Escondido will vote you out in 2018, so polish your resumes,” and, with a touch towards history, “Remember the library!”

It was a given among members of the group that the city council has already decided how it will vote on the privatization proposal, even though city manager Jeff Epp has said the city is simply studying the proposal.

According to fact sheet posted by Epp on the city’s website:  “City staff is still analyzing whether or not there are cost savings associated with transferring the day to day operations from public employees to employees of a private company. The Escondido Public Library would remain a public library, as would the building, the land, and the collections.

“As of mid-July, our exploration of the type of employees to use for library operations is focusing sharply on the cost savings issue. The City Council makes the final decisions on the Library, and without substantial cost savings, it would be difficult to recommend any changes. But whether or not changes are made as to the type of employees operating the Library, a review is always a great idea for optimizing operations.”

However, the group Monday night wasn’t buying that.

“Why would the public support a bond to expand the library and put it at Grape Day Park just to hand it over to someone else?” Jackson asked.

One member of the audience added, “One message we can send is ‘If you vote for this we will not vote for you in 2018.”

2 responses to “‘Save our library’ group forms: vows resistance”