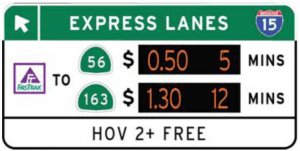 SANDAG began installing new signs along the Interstate 15 (I-15) Express Lanes this week that will more clearly display who can use the Express Lanes, estimated travel times to upcoming freeway connectors, and real-time FasTrak toll rates.

A recent research effort determined that the existing signage on the I-15 Express Lanes can be difficult to read, and that posted information about toll rates and who can use the lanes isn’t easily understood. With input from I-15 commuters that participated in focus groups and surveys, upgraded signs were designed to address these issues.

To minimize impacts to traffic, new signs will be installed at night, between 9 p.m. and 5 a.m. During those work windows, drivers can expect lane closures in the Express Lanes and general-purpose lanes, in the area in which the new sign(s) are being installed on that particular night. Traffic impacts will be minimized as much as possible. Regular FasTrak toll rates will apply during sign installation work windows.

No changes will be made to rules regarding who can use the Express Lanes. Carpools, vanpools, transit services, permitted clean air vehicles, and motorcycles will still be able to use the lanes for free all day, every day, without a transponder. Solo drivers with FasTrak will still be able to pay a toll to use the Express Lanes, and the formula used to calculate the toll will remain the same.

For more information about who can use the I-15 Express Lanes, how to use the Express Lanes, and for answers to frequently asked questions, visit 511sd.com/ExpressLanes.