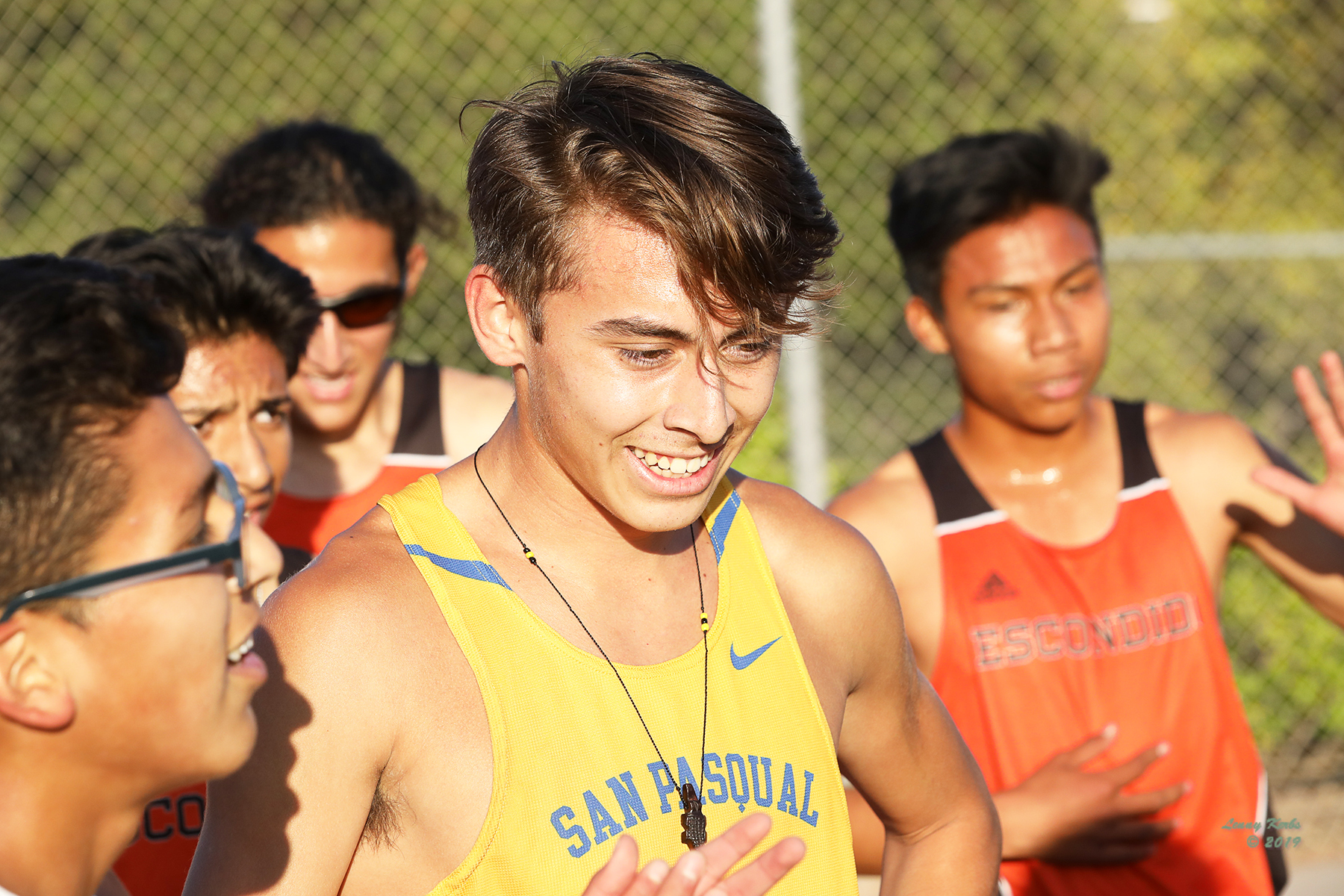 NTV has had plenty to smile about during the course of his standout senior season. Photos by Lenny Kerbs.

Noah Tellez-Velazquez’s first inkling that he had an aptitude for running came when he was in elementary school. He casually discovered that he could run faster, go longer and generally outclass his older brother and cousins when it came to simply scampering around.

Noah’s interest in running then manifested itself in a more organized setting when he elected to run cross county at High Tech Middle School in San Marcos. It was there that Tellez-Velazquez came to love the discipline of running and noted the rewards that can be achieved when a runner makes a real commitment to putting in the hard work.

Now fast forward to the present where as a senior at San Pasqual High, NTV has reached a lofty level of performance. In many regards, he has become a star. The four years he has spent on the Golden Eagle cross country and track teams have developed and matured him into a superior talent. There can be no doubt that as an athlete, NTV is clearly hitting his stride with plenty of upside yet to be unearthed.

For example, the current track season has been a shining example of not only NTV’s remarkable results but also of his enormous potential and promise. Should you need verification as to his gravitas as a runner, just check out these glossy numbers. In 11 races at the taxing 800 meter distance, he has come up short on only one occasion. In five races at the testing 1600 meters, his record is unblemished. And just for good measure, he has been an indispensible anchorman of SP’s stellar 4×400 relay squad that has lost just once. In other words, in the 27 times he has taken to the track in those three disciples, NTV has been bested but twice which qualifies as a mighty impressive standard.

When asked what has enabled him to become such a dynamic runner, the 17-year-old Tellez-Velazquez initially talks about what goes on upstairs. “I think of myself as being mentally strong and having a calm and confident mindset,” he says. “I’m also pretty good at gutting it out and pushing through whatever challenge I’m dealing with.”

From a technical standpoint, Noah is a sight to behold with a smooth, relaxed and fluid stride that suggests he is at ease and under control. Tactically, he possesses an enviable sense of how to dictate pace, when to up the ante or flat out put the pedal to the metal. 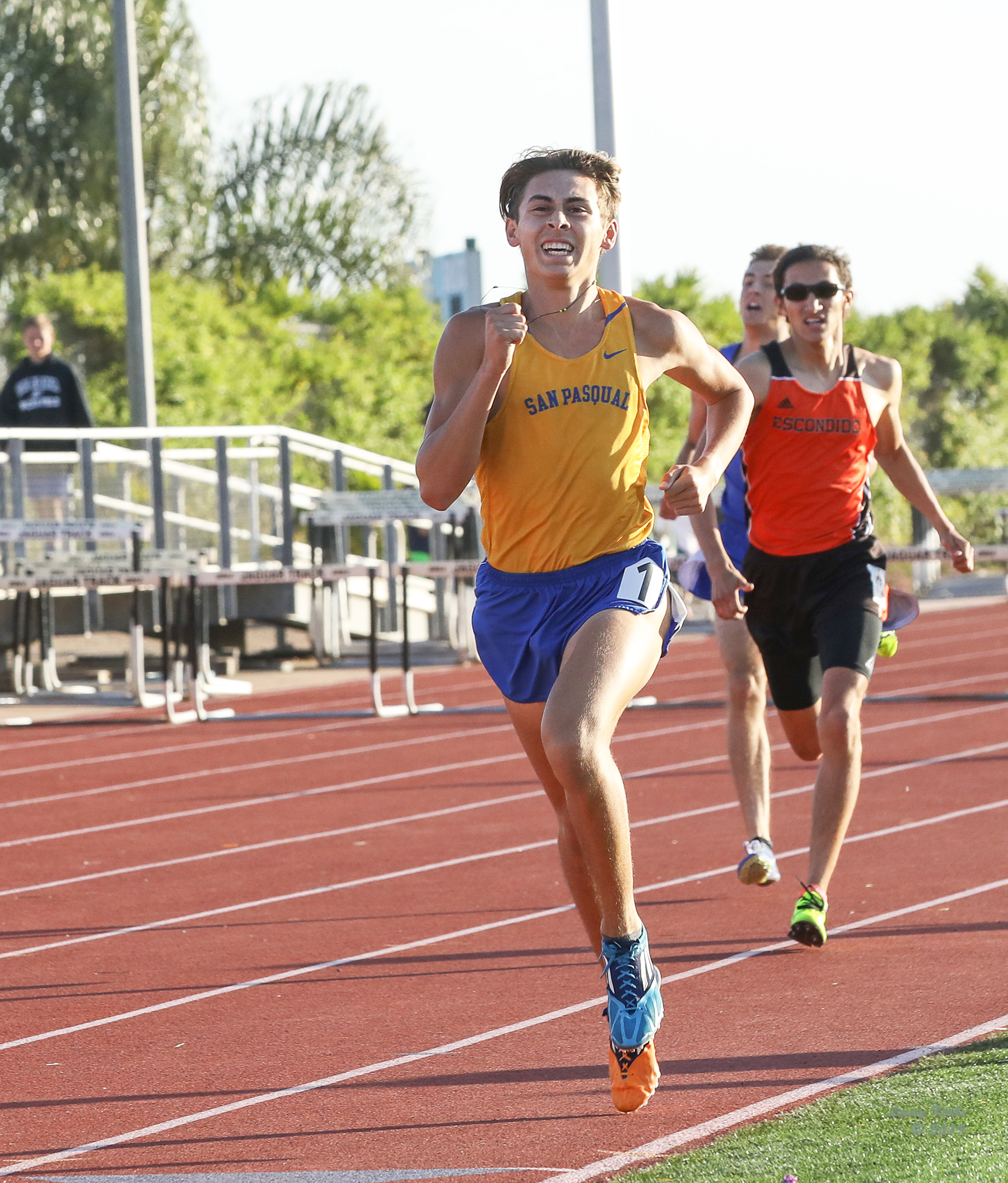 As he demonstrated at a high-profile meet at Azuza Pacific, NTV can produce a powerful kick to win a race.

Blessed with real speed, he can either seize the lead early and hold onto it throughout a race or put on a closing rush that can be breathtaking. NTV is that rare runner who can win with contrasting strategies.

Plus, his knack for excelling at different distances is another huge asset that separates him from the pack. “He’s an outstanding runner with a combination of speed and strength,” says SP’s head track coach Pat King. “But what makes him truly special is that he’s got really great range. I mean, he just has amazing range.” The tremendous success that’s he experienced at races of differing lengths more than verify the veracity of King’s assessment.

Though a splendid relay man who also established a personal record of 4:19.6 in the 1600 during a dual meet against Mt. Carmel in mid-March, it is the 800 meters where NTV does his most serious motoring. Readily acknowledging that it’s his favored distance and where he places his most intense emphasis, the 5-foot-10, 155-pound Tellez-Velazquez relishes both the mental and physical demands of the race.

In general – though changing circumstances can dictate a switch in approach – his plan of attack is to get out to a quick start, settle into a rhythm over the second 200 meters and then “really start pushing myself.” Thus far, it’s proven to be a formula that’s been darn near perfect.

Meanwhile, every element of his training, athletic skill and fierce determination came together on March 23 at the APU Distance Meet of Champions. It was at that prestigious event that NTV put on a performance in the 800 that garnered plenty of headlines and earned him a ton of cache. In a thrilling dash to the finish in which he overcame numerous opponents without ever getting near the inside lane, Noah posted a spectacular time of 1:52.52a which gave evidence of how high his ceiling could go. Not only was that clocking the second best in the state of California at the time but perhaps even more remarkable, it registered as the fourth fastest in the entire country. The humble and unassuming young man from San Pasqual was suddenly making waves on a national scale. “He had the stamina to catch and run down eight guys,” marvels King. “That was such a huge boost to his confidence to do that against really good competition.”

And now as the track season winds down, NTV likes where he’s situated as it relates to producing notable results when the stakes are arguably at their highest. “I feel very strong and I think I’m about to hit my peak,” he says. “I’ve been tapering off somewhat on my workouts and should be 100 percent ready and recovered.”

Expected to do exceptionally well if not win outright at this Saturday’s San Diego Section CIF Finals and thereby qualify for a coveted spot at the State Track and Field Championships to be held in Clovis, NTV nonetheless won’t get ahead of himself. “Sure it would be nice to perform in those type of events but I don’t assume anything,” says Noah. “I’m just going to continue to train and do my best and see what happens.”

However, once his time as a decorated prep comes to a close, a new and exciting chapter will await him. Come later this year, NTV is scheduled to matriculate to Division I Wyoming where he will do double duty. Aside from competing on the cross country team, Tellez-Velazquez will also take to the track as an 800 and 1500 practioneer. “If he’s smart with his training, stays healthy and continues to believe in himself, then he can definitely make a mark at the next level,” conveys King.

But for now, local track fans will enjoy watching and witnessing the last couple of races of a gifted Golden Eagle who can fly even while he’s running. 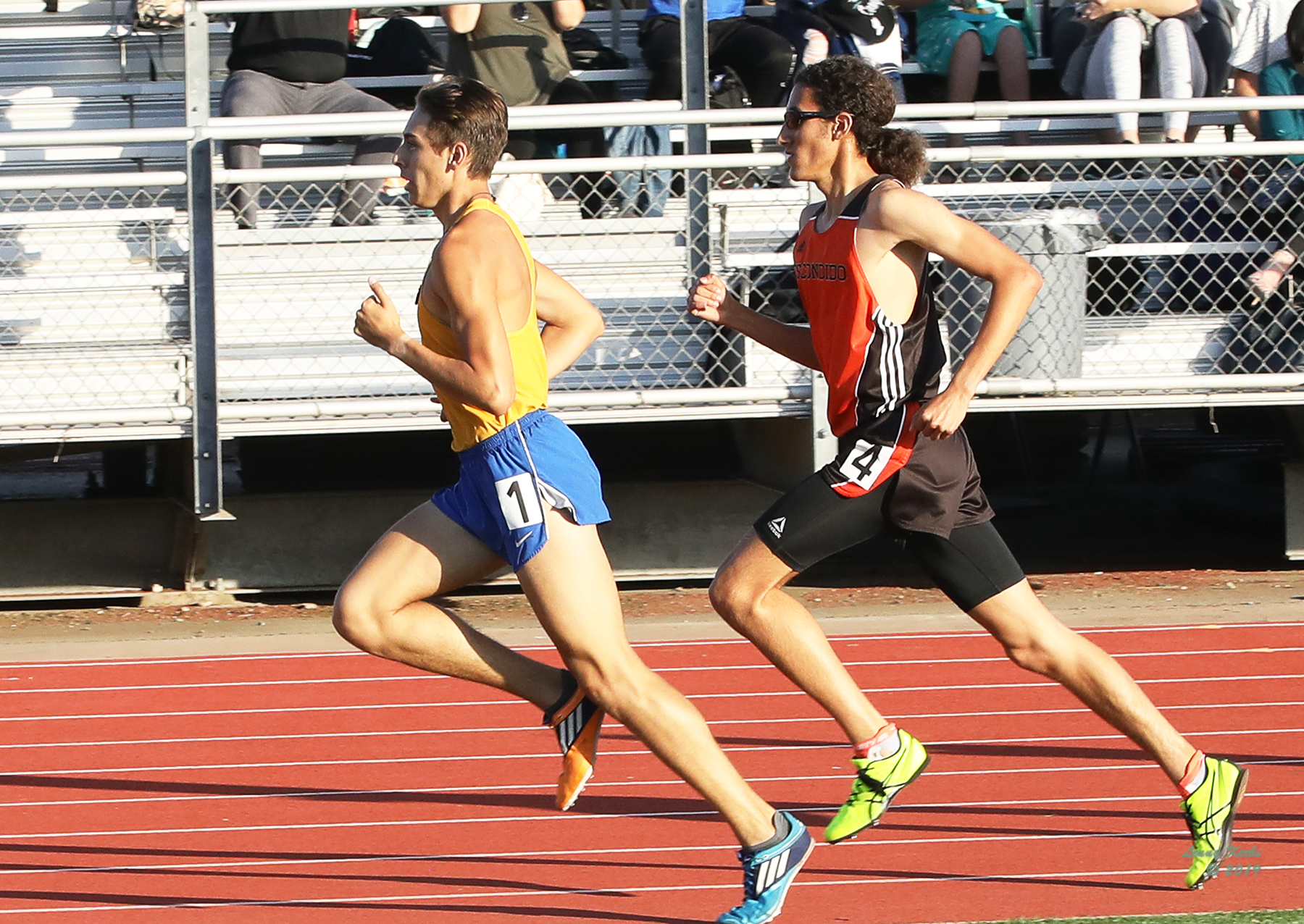 Tellez-Velazquez is known for making it look easy with his fluid and smooth stride. Photos by Lenny Kerbs.