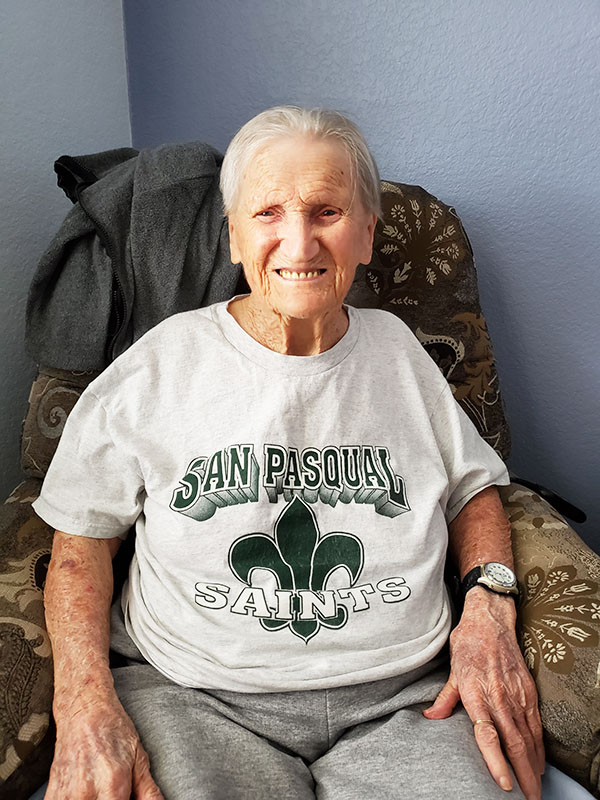 Jane Trussell will be celebrating her 100th birthday at the same party that the San Pasqual Union School turns 100.

San Pasqual Union School turns 100 this year and the celebration being planned includes a special surprise for former students. The “Little School in the Valley” in Escondido has had many faculty and staff over the years, but only one staff member can say they served the school for over 70 years. Remarkably, that employee plans to attend the big shindig on June 22.

Jane Trussell has known a lot of students in her 70 years at San Pasqual Union School. She has seen the tiny, rural elementary school grow from a two-room schoolhouse with 45 students to a sprawling 26-acre campus with a gym, stage, science lab and library serving more than 500 students.

As a part-time teacher and full-time volunteer, Trussell stayed connected to the school that has been a major part of her life since she arrived at San Pasqual in 1942 as a recent graduate of San Diego State College. A native San Diegan and Point Loma High School graduate, Trussell was hired to teach the older students and fill the role of principal.

“This was during World War II and there was a shortage of people,” she said, “So, I was principal, taught the upper grades, drove the bus and did the custodial work.” She even took on the role of superintendent in the early 1970’s.

She eventually married, but she and her husband never had children. “I felt my children were at school,” said Trussell. “I could send them home to mother at the end of the day and that worked out fine for me.”

Throughout all these years at San Pasqual, Trussell only missed one day of work — the day her husband died in the late 1980s. Although she misses the old-fashioned tightknit family atmosphere of the early days, and she’s not overly fond of schools’ reliance on technology, she said there’s still no place she’d rather be than the little school in the valley, helping out in any way she can.

After she “retired” as a paid employee, Mrs. Trussell continued to volunteer every day that she was able. Even at the new school on Rockwood Road, she would haul out her old record player and teach eighth-graders how to do the Virginia reel, just like she did when she was the teacher.

With the record player providing the music, Trussell did the calling for the dancers. “Do-si-do and reel your partner . . . form a bridge and come on under.”

At recess students loved to play “piggy wants a signal” (a variation of hide and seek) and Mrs. Trussell would always be “it.”

While the school has been an integral part of Trussell’s life, education hasn’t been her only passion. She was a premier female athlete in her era, known statewide for playing softball. She even has a ball field named for her at Escondido’s Kit Carson Park. Mrs. Trussell played in San Diego’s women’s softball league in 1937 and played on traveling teams through the late 1950s and early 1960s. “I was glad to see women’s softball become an Olympic event,” she said. “That’s the caliber of ball I used to play.”

Among the teams she played on were the Slick Chicks of San Diego and the Tamale Queens, sponsored by the San Diego Tamale Factory. Mrs. Trussell played third base and, when asked if she was a good hitter, she modestly replied, “Well, I have lots of trophies and plaques saying I had the best batting average.”

She served the school for 70 years from the 1940’s until finally taking a break in 2010. The party for both the little school and for Mrs. Trussell will begin on Saturday, June 22 from 2 p.m. until 7 p.m.

The reunion will take place at the school at 15305 Rockwood Rd. in Escondido. The celebration is open to all former staff, students, and community members present and past.  Mike’s Barbecue in Escondido will provide the food and the San Pasqual School Foundation will handle beverages.

For more information, view the reunion website at www.SPUSreunion.net or contact Cece Bostrom or Jeff Felix at spusreunion@gmail.com.

San Pasqual Union School District is a one school district formed in 1918 and began in 1919. A two-room school was built in 1923 and was sufficient to serve the population until 1970 when an additional 10 classrooms were added. With the explosion of growth from housing developments, a new 26-acre school opened on Rockwood Road in 2001. More information about the school and district can be found at www.SanPasqualUnion.net.