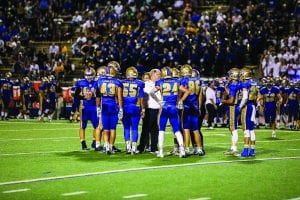 Thanks to a late comeback victory over RBV, Coach Tony Corley will lead his Golden Eagles into the Division III semifinals against Sante Fe Christian this coming Friday night. Photo by Lenny Kerbs

But after Friday night’s results, only the Golden Eagles are left to carry on the hopes of local football fans. By virtue of a clutch and yes, desperate fourth-quarter rally, SP dodged a real scare in defeating a game Rancho Buena Vista squad 27-25 in a Division III quarterfinal tilt.

The narrow victory shouldn’t have come as a surprise to anyone familiar with the dynamics and vagaries of football, particularly at the high school level. To be sure, SP had bested RBV nearly a month before by a decisive 48-6 count but the Longhorns were on a three-game winning streak and featured a dangerous running back in Dorian Richardson. Moreover, it can be a tricky proposition trying to beat the same opponent twice in one season.

And this particular contest was destined to be a dogfight, with little similarity to the previous encounter between the two teams.

The G. Eagles were quick to get on the scoreboard first when quarterback Westin Erdman, whose passing has been razor sharp as of late, found junior running back Shawn Carter with a 15-yard payoff strike.

However, in a clear indication that RBV wasn’t going anywhere, the Longhorns took little time in responding and drew within a point at 7-6 when signal-caller Mathew Llerenas delivered a 20-yard touchdown pass of his own. But SP was able to counter before the end of the first period with a timely 7-yard burst by the tough Saud Carillo that extended the G. Eagles lead to eight.

And after the two squads battled through a scoreless second quarter, with plenty of hard hitting in evidence, it was apparent to all those in attendance that this was a game that had the look of one that could go right down to the wire. Not surprisingly, that’s exactly the scenario that eventually played out.

After intermission, Lleneras really energized his mates with his second scoring pitch (this one to Isaac Jimenez) which brought the ‘Horns ever closer at 14-12.

But the momentum that the visitors seemed to be riding was instantaneously blunted by one stunning play. Dropping back and given time, the on-fire Erdman drilled reliable receiver Cameron Young with a tight spiral and the result was an electrifying 67-yard TD connection.

Heading into the final 12 minutes of play, SP was on top 21-12 but the Longhorns were to erase that margin by allowing their workhorse back Richardson (33 carries, 217 yards) to do his thing.

Running with a fierce determination and commitment, the RBV senior gashed the SP defense for a pair of scoring runs, one of which came from 12 yards out. The last of those TD bursts came with the clocking winding down and pushed the ‘Horns to the front at 25-21.

But there was just enough time left for SP to do something special and with their very survival at stake, the G. Eagles refused to blink. A defining length of the field drive that featured five Erdman completions culminated with an 11-yard hookup with the 6-foot-1 Young with just seconds remaining. That brought the final count to 27-25 and meant that the G. Eagles would live to see another day.

That next opportunity will come this Friday night when the No. 3 seed G. Eagles travel to the coast to take on a Santa Fe Christian squad that sports the same record (7-4) as that of SP. Seeded second in Division III, these Eagles are coming off a 63-14 demolishing of La Jolla, a game in which hotshot freshman runner Stephen Britton parlayed 16 carries into 181 yards and a three TDs.

Based on their respective seeding and the fact that each team is riding at least a three-game winning skein, this semifinal matchup figures to be a highly competitive affair. But with a percolating offense that can get it done both by land and air and with a slew of defenders fully capable of rising to the occasion, the G. Eagles have a real shot of making it all the way to the championship game.