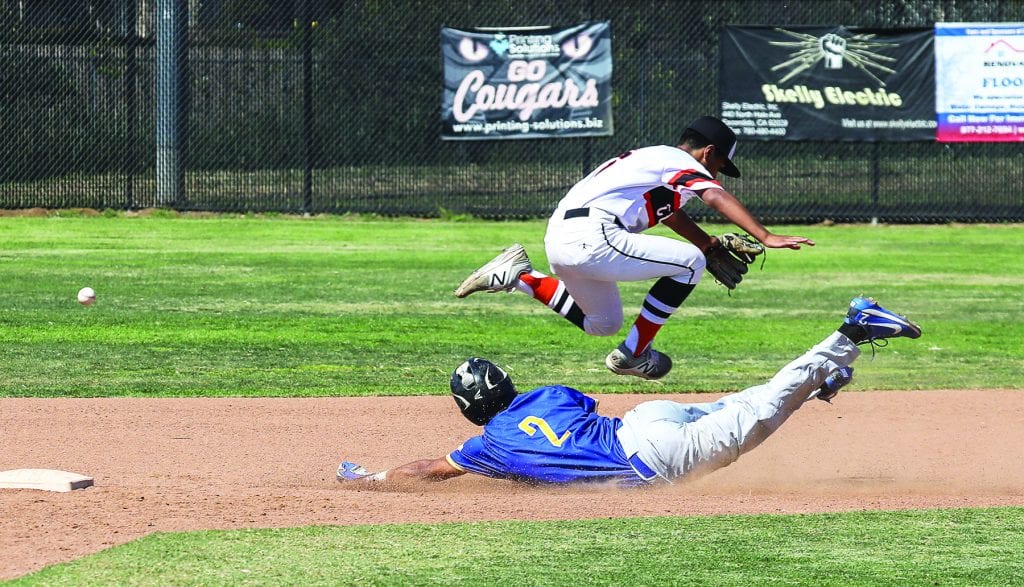 Eagle standout Elijah Jackson slides under a leaping Cougar infielder as a throw from home heads into center field. Jackson was aggression personified in a 5-3 SP win, stealing four bases.

Proving that its resurgence under first-year coach Jake Blalock is no mirage, the San Pasqual baseball squad ran its current winning streak to five games last week when it edged intra city and Valley (League) rival Escondido by scores of 5-3 and 1-0.
By virtue of those victories, the Golden Eagles ran their overall record to a notable 16-10 while solidifying their second-place standing (8-3) in the VL. However, things are not trending as favorably for the Cougars (10-11, 4-4), who have now dropped four of their last five, three of which have resulted from narrow one-run defeats.
Thursday marked the first of three games to be played between the two clubs this season with each looking to set a positive tone that might produce a carryover effect. Early on, the host Cougs jumped out an early 2-0 lead in the first inning when Esco stalwart Juan Cervantes pulled an RBI double down the line before Charlie Perkins-Turner plated another run with a medium-deep sacrifice fly to right-field.
Tellingly and perhaps of huge psychological import, SP answered right back in the very next inning. A booming double to deep left field off the bat of catcher Connor Oca chased in a score while a wild pitch brought in Jacoby Koser with another. However, the damage could have been even more substantial had G. Eagle Brett Sayers not been thrown out at the plate, as was SP’s Elijah Jackson an inning earlier.
After that the pitchers, particularly SP starter Jansen Lublin (5.1 IP, 4H, 3R, 3K) began settling in and the score remained deadlocked until the fifth. It was there that the athletic Jackson, who would go on to deliver two hits, walk twice and steal a whopping four bases, sent a shot into right for a single. Eventually, he would move up on a theft of second and a groundout to short. And soon after, well-built senior Drew Thomas reached out and muscled a RBI single into left off of reliever Cervantes that gave the visitors a 3-2 advantage.
Now it was the Cougs turn to respond and they indeed met that challenge although with some assistance from SP. Having led off the bottom half of the inning with a base on balls, Harrison Mullany gradually moved over to third via a sacrifice and grounder to second. It was at this juncture that Esco manager Aaron Hoofard called upon Lance Desorbo to pinch hit. Making contact, the junior directed a bouncer wide of third that Thomas knocked down but couldn’t control. And by the time the SP infielder had retrieved the ball and fired over to first, Desorbo had hustled down the line and beat the throw. Once again it was a brand new ball game at 3-3. 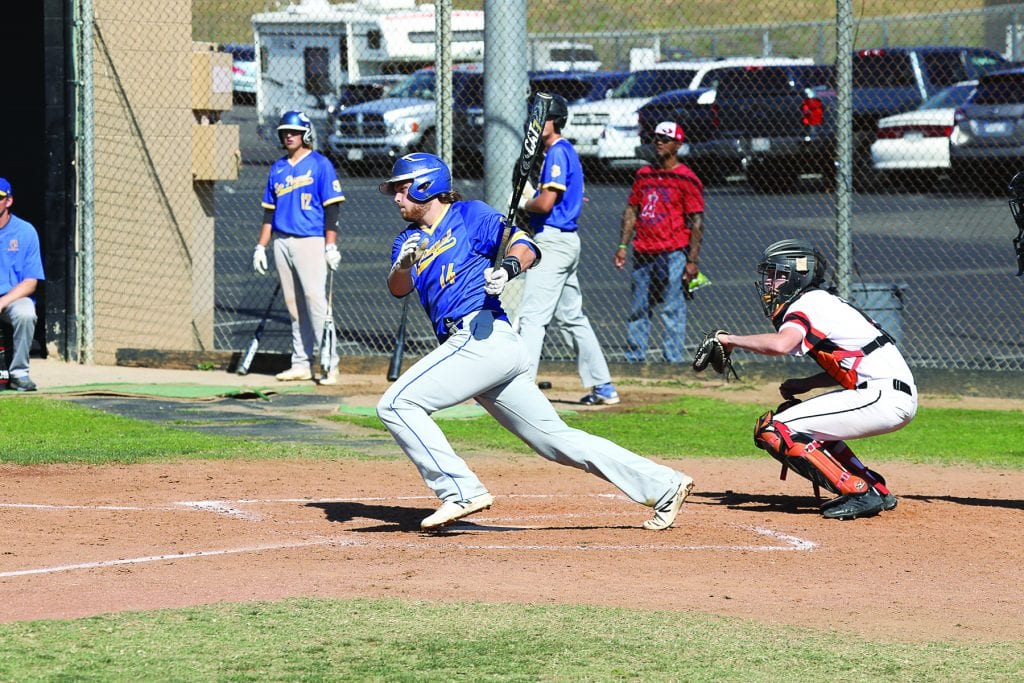 SP third baseman Drew Thomas had a productive afternoon last Thursday, banging out two hits as well as driving in a pair of runs. Photos by Lenny Kerbs

But the G. Eagles, who would record at least a hit in every frame and a total of 11 for the contest, kept right on swinging the bats and that would prove decisive. Oca got things started in the seventh when he spanked his third hit of the day into left field. Jackson then maintained his perfect afternoon by waiting perfectly on a pitch and serving it the other way for another single. By the time the rally was done, both Oca and Jackson had scored and Thomas had tacked on another ribbie with a lengthy sac fly to right.
Entrusted with a 5-3 margin, right-handed closer Jake Madison, who had come on to record a pair of outs in the sixth, locked up matters when he induced Nick Anaya to hit into a double play and then brought the game to a end by fanning Victor Seneres on a hopping fastball.
Two days later, the G. Eagles had doubled their pleasure over the Cougs with another win, this one by a 1-0 count. The deciding run coming across in the bottom of the sixth when Brandon Feddock drove home Jackson with run-producing single.
And that proved to be more than enough for the pitching troika of Andrew Walsh, Connor Hensen and Madison who combined on the six-hit shutout.
The Cougars will get one more crack at San Pasqual next Tuesday afternoon in hopes of avoiding the sweep but getting the best of the G. Eagles won’t be an easy task. As the Cougs discovered firsthand, coach Blalock has his club playing with demonstrable confidence and conviction.