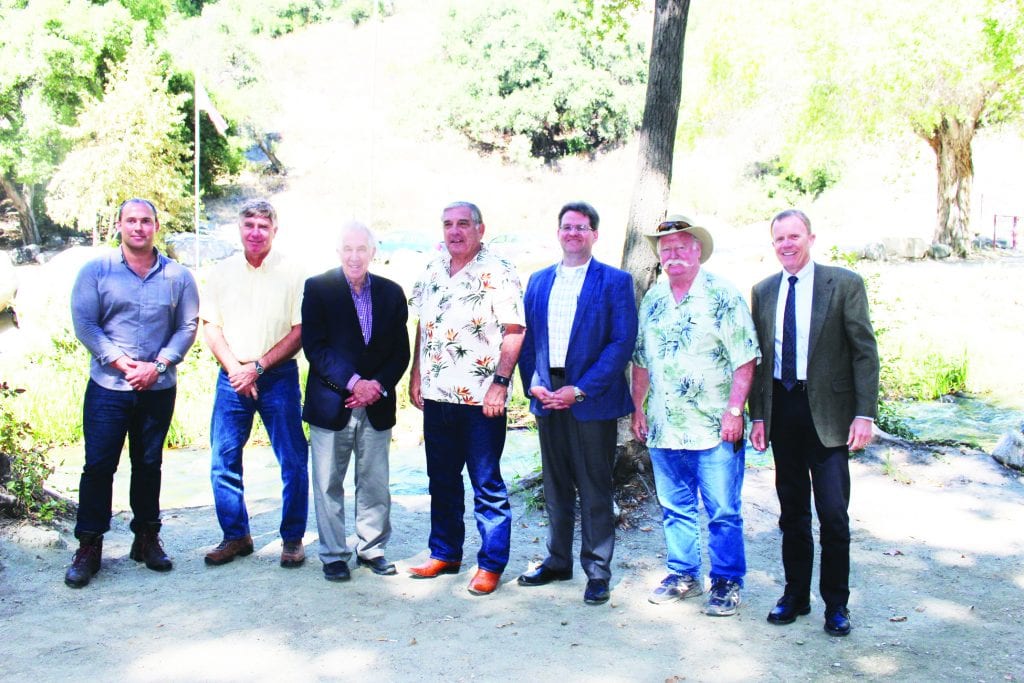 On Monday, one time antagonists of a 50-year battle in the courts over water rights, who eventually became friends and allies, celebrated the San Luis Rey Indian Water Rights Settlement.

They included representatives of the Rincon, Pala, Pauma, San Pasqual and La Jolla tribes, the City of Escondido, Vista Irrigation District and the San Luis Rey Indian Water Authority, whose chairman is Bo Mazzetti, chairman of the Rincon tribe.

In the words of Assemblywoman Marie Waldron, whose own recent legislation will make it feasible for the tribes and the water districts to deal directly on water issues: “As a 14-year member of the Escondido city council, who was involved in the issue, I know how important and historic this collaboration is. While the settlement is written in mere ink, the love, friendship and union of the parties is what will bind it together!”

The day began with tours of the facilities involved, which included  Lake Henshaw, the Escondido reclamation plant and diversion canal, the Pala river bed and back to La Jolla Campground, just off Hwy 76.

The representatives sat around picnic tables next to the greenish, rapidly flowing San Luis Rey, which carries water from Henshaw, which originates on the slopes and artesian springs of Palomar Mountain, and ends in Oceanside. 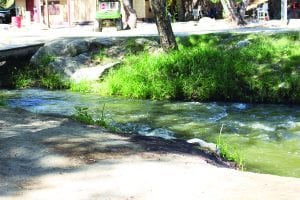 The San Luis Rey River, the subject of 50 years of legal battles, flows placidly on its way to the ocean.

In the 1880s the federal government gave away the water rights to the San Luis Rey to the cities of Vista and Escondido. In the 1960s the tribes, which were largely destitute before the days of Indian gaming, took those cities to court, claiming their water rights had been stolen.  In those days, the reservation was dry. “The cattle were dying. The trees were dying,” recalls Mazzetti.

Bo Mazzetti’s dad, the late Max Mazzetti, helped spearhead that legal challenge. The only one left who has been involved with the case from the beginning is Bob Pelcyger.

“I first heard the words San Luis Rey in 1967,” he said. He stayed with the case until its recent final settlement.

The settlement means the five tribes now have prominent seats at the water table and control 16,000 acre feet of water. The beauty of the settlement is that there are no winners and losers. The tribes won back their water rights, but a new supply of water was created that provides 16,000 AF to Escondido and Vista.

This new supply was created by lining the bottom of the All-American Canal in the Imperial Valley, which carries  Colorado River water into California. This saved water from soaking into the ground.

One party not happy about that outcome was Mexico, which challenged it in court—but lost.  “We had a fight with Mexico,” said Mazzetti. “They had to introduce another bill in Congress to override that objection.”

After many, many years of court battles, the cities and the tribes concluded that their real enemy wasn’t each other, but the federal government.

“Our adversaries were Escondido and Vista and it was not their fault. Each of us came to realize that it was the federal government’s fault for giving the water away twice,” said Mazzetti.

This settlement affects about 300,000 consumers and will impact the lower part of the San Luis Rey basin.

“Now we have the water that we need,” said Don A. Smith, director of water resources, Vista Irrigation District (VID.)

Marty Miller, board president, VID, added, “Forty-eight years of litigation and uncertainty and we finally worked it out and we ended up with Vista getting a decent piece of the water pie. And now we are getting the benefit and the tribe gets what they always said they had a right to.”

Miller came on the VID board in 2008, when everybody thought the “final” deal had been worked out, except that it wasn’t settled then. 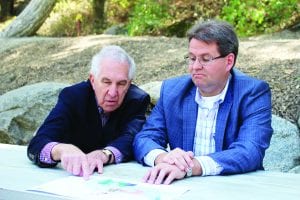 From left: Don A. Smith, director of water resources, Vista Irrigation District, Attorney Bob Pelcyger, who represented the tribes in their 50-year battle to win back water rights to the San Luis Rey River, Escondido Director of Utilities
Christopher W McKinney and Bo Mazzetti, chairman of the San Luis Rey Indian Water Authority. Once adversaries, the tribes and cities are now “joined at the hip,” in Mazzetti’s words.

Pelcyger observed, “The last 15 years of delay was caused by the federal government changing its position on what the meaning of the law that had been passed in 1988 meant.”

Miller added, “We had to have another bill passed in Congress that acknowledged what the bill that was passed in 1988 said.”

That bill, signed by President Ronald Reagan, gave the tribes “supplemental” water supplies. Much wrangling occurred over whether “supplemental” actually meant “replacement.”  The tribes hired a former solicitor general of the United States under President Clinton, Seth Waxman, who argued that supplemental meant just that. The feds called his opinion that of a “hired gun,” and wouldn’t budge.

They wanted to provide 15,000 AF to the tribes, but not from the river. The tribes insisted they were entitled to the original SLR water rights, and that the cities should get replacement water. The question was, from where?

The eventual solution was to line the canal and free up water, from which a percentage was allocated for the cities, making them whole.

In 2000, in one of his final acts, former Congressman Ron Packard shepherded a bill that specified the water would come from this source. More legal wrangling followed. It wasn’t until LAST December that a final bill was signed by President Obama.

“It’s a unique settlement where the impossible became possible,” said Mazzetti. “When do you find new sources of water? A source that benefits the whole region?” He adds this seeming paradox, “We had to cut the pie in order to make the pie bigger!”

Chris McKinney, director of Utilities for the City of Escondido, said, “For Escondido it means this supply of water we had been given in the 1800s is now secure.” That the supply is one quarter of the city’s water use.

There is one other bill that relates to this issue:

The legislation was needed because federally recognized tribes are sovereign governments, and are not subject to state and local laws and regulations, except for those required under their compacts.

Yet most tribes are unable to access services from nearby water districts without annexing territory to those districts, a process which would subject sovereign tribal governments to state and local regulations and thus violate tribal sovereignty. AB 1361 allows water districts to negotiate voluntary agreements with sovereign tribal governments for the provision of water services in a manner that does not violate the sovereignty of 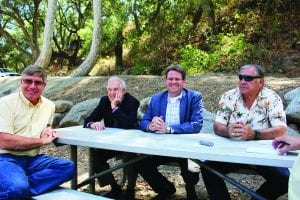 Attorney Bob Pelcyger, who was a participant in the lawsuit from the beginning, points out a feature on the map of the area to Escondido Director of Utilities Christopher McKinney.

negotiating tribes. Tribes that negotiate voluntary agreements with neighboring water districts must comply with all federal and tribal laws, and meet essentially the same terms and payments applicable to other customers of a water district.

The supplemental water that the cities will get can only be consumed by them. They can’t compete with the Metropolitan Water District or the San Diego County Water Authority and sell the water to another party.

At the end of 50 years, nobody knows how many dollars were spent in legal fees litigating what has to be one of the longest cases in the U.S. history.

Pelcyger muses, “The bands unanimously said not only no, but hell no. We want to get our water back and reverse an injustice. It took an additional fifteen years and another act of Congress, and it also took real courage and sacrifice.”