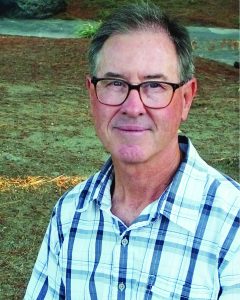 The San Dieguito River Valley Conservancy (SDRVC) Board of Directors last week announced its new president, Brad Bartlett of Escondido, and new board members: Keith Colestock of Santa Luz, and Robert Sheppard and Slater Buck of Carlsbad. Don Mosier of Del Mar was appointed last December. Their terms run from March 2017 to March 2020.

Retired attorney, Brad Bartlett, has an extensive background in land-use and real estate. Trish Boaz, executive director of SDRVC, said “With Brad’s experience in dealing with land rights and acquisitions in various jurisdictions, he is a valuable asset to the Conservancy. We are thrilled to have him join us as our president.”

Bartlett, “I always had an interest in trying to maintain the natural beauty of what we have here. Completing the Coast to Crest Trail has been the focus. I’ve seen a lot of progress and I think we’re poised to make some big strides over the next few years.”

Keith Colestock, retired from a career in investments, found the Conservancy as he was following his passion—art, especially plein-air paintings. He participated in the Conservancy’s plein-air art exhibition at the California Center for the Arts, Escondido where he met Chris Khoury, a long-time member of the Conservancy. He recently completed the Conservancy’s “Exploring Our Sense of Place” program and was introduced to the River Park through that experience. Colestock has also served on the San Diego Habitat Conservancy and the New Children’s Museum.

Colestock said, “Conservation has always been a cause that’s resonated with me. I’m a second-generation Californian and have seen the loss of habitat and open space. I want to make sure the mission of completing the Coast to Crest Trail comes closer to fruition.”

Retired college professor, Robert Sheppard, is an avid hiker and backpacker. For almost 30 years he has been involved to some extent with the Nature Conservancy and the Sierra Club.

Sheppard got involved with the Conservancy with the new Board President, Brad Bartlett, going on hikes and other activities. Knowing Sheppard was looking for something meaningful to do, Bartlett invited him to join the board. Sheppard said, “I’m really interested in completing the Coast to Crest Trail. I’d love to do it in my lifetime. I think completing the trail would be a focused goal, though not an easy one. I’d like to be a part of getting those gaps filled.”

Buck added, “What excites me most about being on the board is two-fold: It’s the ultimate build-it-and-they-will-come, which is good because you get in there to experience the Coast to Crest Trail and you educate them, and then they take that knowledge and transport it to saving similar landscapes. The other part of that is, once it’s built and even before, it’s getting the message out about land preservation.”

Retired Don Mosier, M.D., Ph.D., brings with him a long history of community service, including being Mayor of Del Mar 2010–2011, a two-term City Council member and a member of the Design Review Board. He has served as the San Dieguito River Park & Open Space JPA board chair, liaison to the Del Mar Community Connections, the Del Mar Lagoon Committee, the Del Mar Village Association, the Ad Hoc Design Review Committee and many, many more.