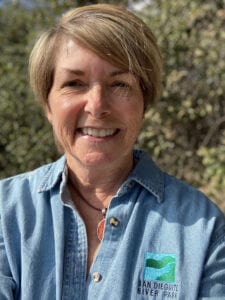 The Board of Directors of the San Dieguito River Park Joint Powers Authority (SDRP JPA ) last week announced the selection of Shawna Anderson as its new general manager.

Anderson has over 30 years of experience in the planning and environmental fields, 20 of those as the San Dieguito River Park JPA’s Principal Planner.

She has been responsible for planning and executing capital projects as the organization’s Principal Planner, including adding several miles to the Coast to Crest Trail, leading planning efforts with partners including the San Diego Association of Governments (SANDAG) to restore the San Dieguito Lagoon, establishing the SDRP’s first ranger station, and securing grant funding.

The General Manager is the top-level executive of the organization and reports to the Board of Directors. Anderson oversees a staff of 11 employees and is responsible for directing all programs and services of the JPA, park planning, acquisition and development, and park maintenance and operations.

JPA Board Chairman Barbara Bry commented that “Shawna Anderson is exceptionally qualified to serve as the next General Manager of the SDRP JPA. In her many years working there, she has built important partnerships, secured major grant funding, and demonstrated her commitment to expanding the organization’s impact.”

The San Dieguito River Park Joint Powers Authority manages a 55-mile-long open-space river corridor including habitat and trails for hikers, bicyclists, and equestrians that stretches from Volcan Mountain in northeast San Diego County to its ocean outlet at the beach in Del Mar.

The San Dieguito River Park is a joint powers agency between the cities of Del Mar, Escondido, Poway, San Diego, and Solana Beach, and the County of San Diego. The long-term mission of the JPA is to finish the planning and construction of the 71-mile-long Coast to Crest Trail from Del Mar to Julian, of which two-thirds is already complete and available for public use.