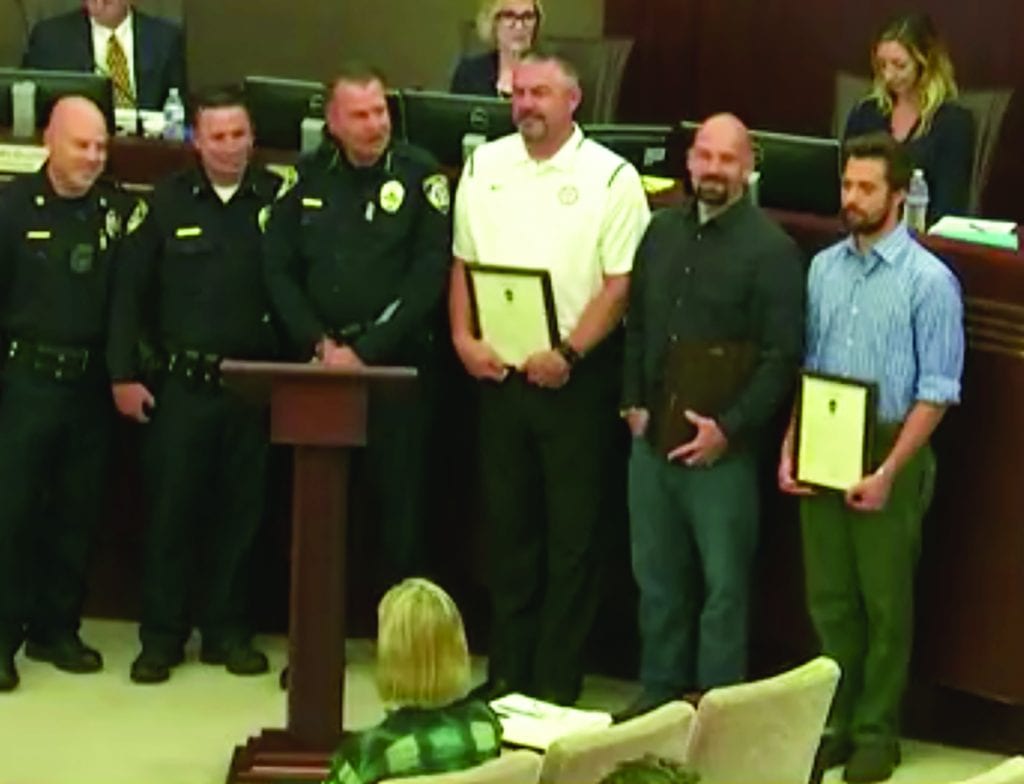 Six individuals were honored at the May 24 Escondido City Council meeting for taking actions last year that helped Escondido police intervene in a case where a woman was being assaulted by her “boyfriend” with a tire iron.

Mayor Sam Abed and Police Chief Craig Carter handed out the awards to William Stamm, William Stout and Bala Carter, who were present, and Laura & Robert Lambert and Fernando Martinez, who were not present.

The Deputy District Attorney on the case, Ben Barlow, was also there, and spoke briefly.

Chief Carter set the scene for August 3, 2016: a woman was driving with her boyfriend when he began assaulting her with a tire iron and threatening to kill her. Bystanders intervened in several different ways. Bala Carter threw a skateboard at the attacker to distract him. When the suspect continued to assault the woman, William Stamm intervened by grabbing the arm of the attackers several times, at considerable risk to himself.

Finally, William Stout tackled the assailant, bringing him to the ground. The others recognized were willing to be witnesses in the case, which went forward despite the unwillingness of the victim to press charges or testify against her boyfriend.

The assailant was found guilty of various charges, including assault with a deadly weapon, and sentenced to 38 years to life. Chief Carter praised those who intervened “for their willingness to place themselves in harm’s way,” to help someone else.

“The circle of violence is such that it’s not surprising that the victim would not testify,” said Carter, adding that without the assistance of the bystanders, who called for the police, who showed up in time, “It could have turned out to be a homicide case.”

Deputy District Attorney Barlow added, “The men up here did an incredibly courageous thing.” He said that all of those who intervened “made my job easy. They helped save a life, I think.” He also credited the “exceptional work that the Escondido Police Department did that allowed us to put this individual away for life.”