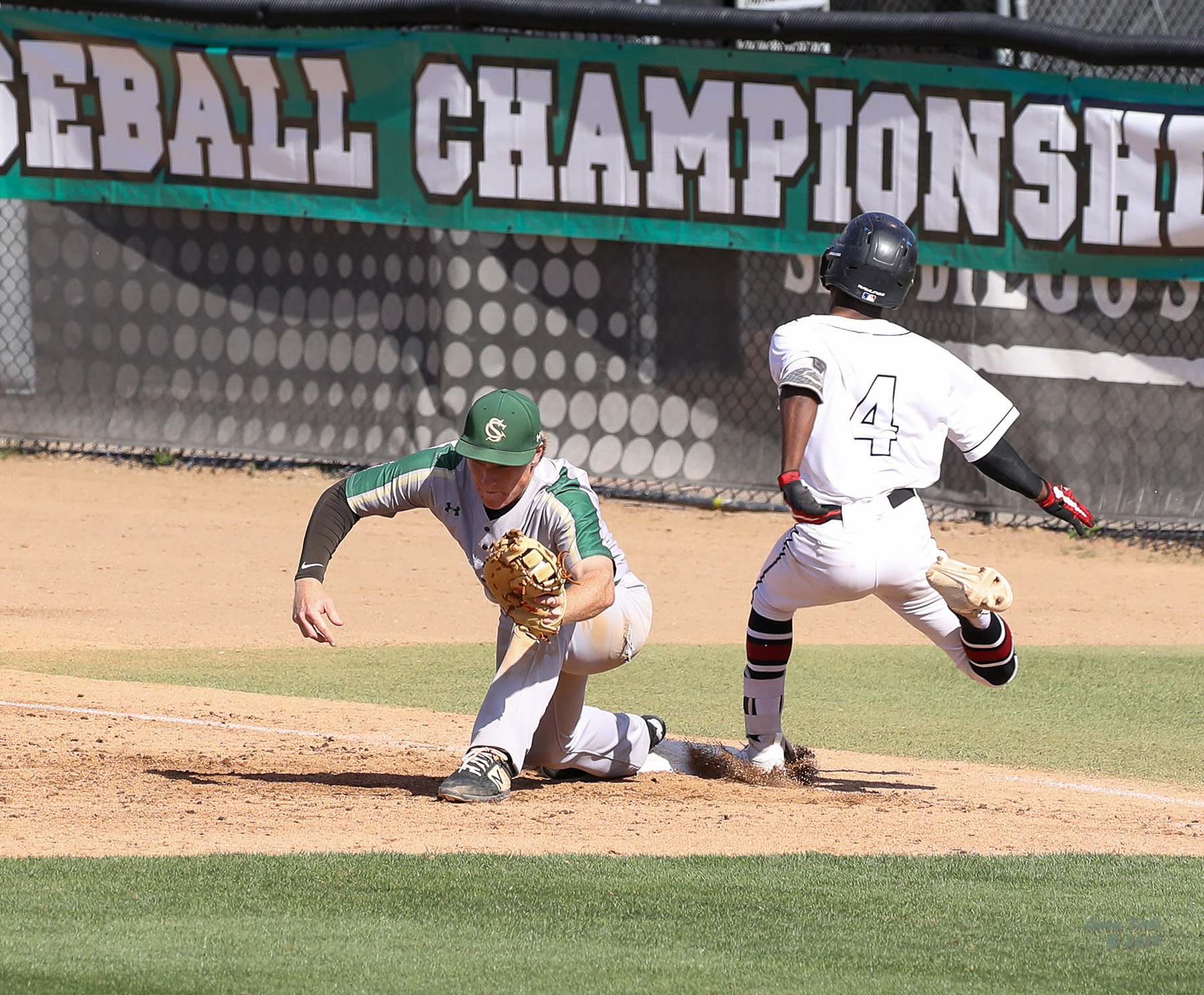 Caiman shortstop Binyam Gebhardt, who had one of the six Classical hits, nearly had another before being nipped at first base on a close play.

One minute Classical Academy was right there, within close striking distance of a CIF title and a chance to make school history.

But by the time Sage Creek had finished with a monumental and stunning sixth-inning eruption, the rout was on and the Caimans’ dream of culminating their magnificent season with a championship had all but dissipated like a puff of smoke.

In an outburst that will long be remembered in the annuals of CIF postseason play, the Bobcats scored an unthinkable 11 runs in one frame en route to a 14-1 victory to capture the San Diego Section Division II crown in a game held last Saturday at Tony Gwynn Stadium on the campus of San Diego State.

With the decisive victory, the third-seed Sage Creek capped a five-game postseason run after losing its opening playoff contest to Bonita Vista. The triumph also enabled the Bobcats to become one of only a handful of teams in the section to ever reach the coveted 30-win mark.

As for the No. 1 Caimans (29-5), after taking care of Clairemont, Santana and Santa Fe Christian in prior playoff matchups to advance to the finals, they simply were stymied in their attempt to capture the ultimate prize.

However, in the early going against the Bobcats, things got off to a good start for Classical. In the bottom of the first against SG’s standout right-hander Stephen Klenske, center fielder Noah Dull got aboard on an infield single thanks to a sprawling headfirst dive. Shortly thereafter, the Caimans’ most dangerous hitter Zack Jordan ripped a shot into left-center that split the gap and chased home Dull. An animated Jordan slapped his hands in satisfaction as he stood at second base with an RBI double that had staked his team to 1-0 lead. Who would have guessed that Jordan’s two-bagger would prove to be the Caimans lone highlight of the afternoon?

And it wasn’t long before the Bobcats had responded with single runs off of CA starter Tim Boshaw in the second and third innings thanks in large part to a costly throwing error and Nate Brasher’s run-producing line drive single into right-center.

That 2-1 score was destined to hold up until the fateful sixth. By that juncture, Jordan had taken over for Boshaw who had pitched a gritty three innings. But before the soon-to-be massive inning was over, pitchers Vince Marcantonio and Zach Isham were required to follow Jordan to the hill.

Here’s a brief anatomy of what took place during the onslaught: The Bobcats sent 16 batters to the plate, delivered 11 hits and took advantage of three Classical errors. Scott Anderson’s pulled grounder inside the bag at third was the big blow and resulted in a double that cleared the bases and brought home three runs.

Others who made hay during this explosion were Garrett Taylor who singled, doubled, scored twice and drove in a run as well as shortstop Jake Gutierrez who authored two singles, a pair of RBIs and tallied once.

There was a peculiar irony to this colossal offensive output because Sage Creek is not known as a team that puts up big numbers on the scoreboard.

Meanwhile, as the Bobcats were on their way to a 18-hit effort, the Caimans were basically held in check. The starter Klenske, who looks as if he’s slinging the ball more than throwing it, allowed just a run on three hits while striking out seven. It was then left for the versatile Anderson to pick up the win as he finished things off by hurling four innings of three-hit, shutout ball.

Aside from the first-inning safeties of Dull and Jordan, the Caimans were able to produce just four other hits, those coming from Binyam Gebhardt, Dane Kelsey, JP Deluca (double) and pinch-hitter Mason Pillsbury.

Yes, as losses go, this one was tough to swallow given how it went down and the setting in which it took place. But as Classical’s coach Ron Sisler wisely pointed out in the game’s aftermath, what happened on Saturday hardly defined his terrific club.

Many of the achievements that Classical produced during the 2019 campaign went beyond impressive. For perspective, let’s take a closer look at some of them.

To begin with, the Caimans were undefeated at home (11-0) and racked up a glossy record of 18-5 while playing at either away or neutral sites. Moreover, they easily captured the Coastal (League) title while rolling to an 11-1 mark.

And to say they had the knack for going on lengthy runs would be an understatement. In addition to a wondrous 11-game winning streak that covered most of the month of April, the Caimans also ripped off eight and seven-game skeins. When Sisler’s charges got hot, they possessed the ability to stay that way and ride a wave of momentum for all that it was worth.

This was also a club that featured more than its share of signature players. Jordan was a bona fide star who not only won eight games on the mound but wielded a wicked bat (.388 average) while pacing the team with 45 hits, 41 RBIs, 13 doubles and 4 triples.

Boshaw was another dual performer who not only could hit but did some pretty serious dealing on the bump as his 7-3 record and microscopic ERA of 0.94 would attest.

Senior Dane Kelsey showed he could rake with anyone while posting a .368 average, rapping out 43 hits and producing 12 two-baggers.

Noah Dull was without question a dynamic offensive catalyst as he led the team in runs scored (40), stolen bases (22) and walks while hitting at a robust .331 clip.

And finally, there were two others who were vital cogs to the Caimans’ success. Infielder JP Deluca was a productive batsman who hit for average (.310) and delivered RBIs (29) while Vince Marcantonio was a huge factor on the mound with his perfect 9-0 record and enviable 1.68 ERA.

For sure, the season didn’t end the way the Caimans wanted but that conclusion pales in comparison to what went on before it. In so many ways, Classical really did have a marvelous year that won’t be easy to duplicate. To say that the Caimans’ campaign was one for the ages not only wouldn’t be hyperbole but that assessment would be right in the ballpark! 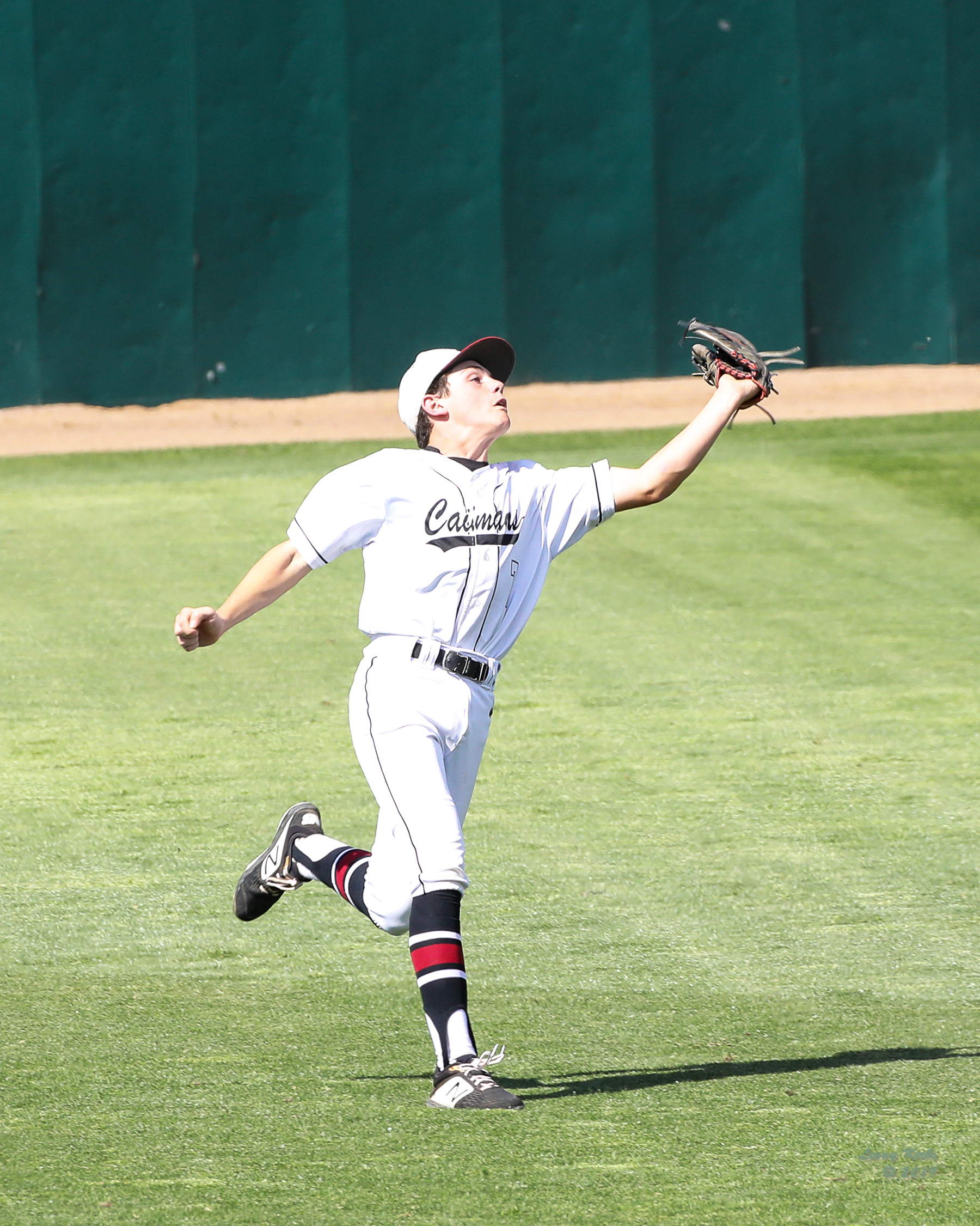 CA’s Michael Moody races in to make a running catch in left field. 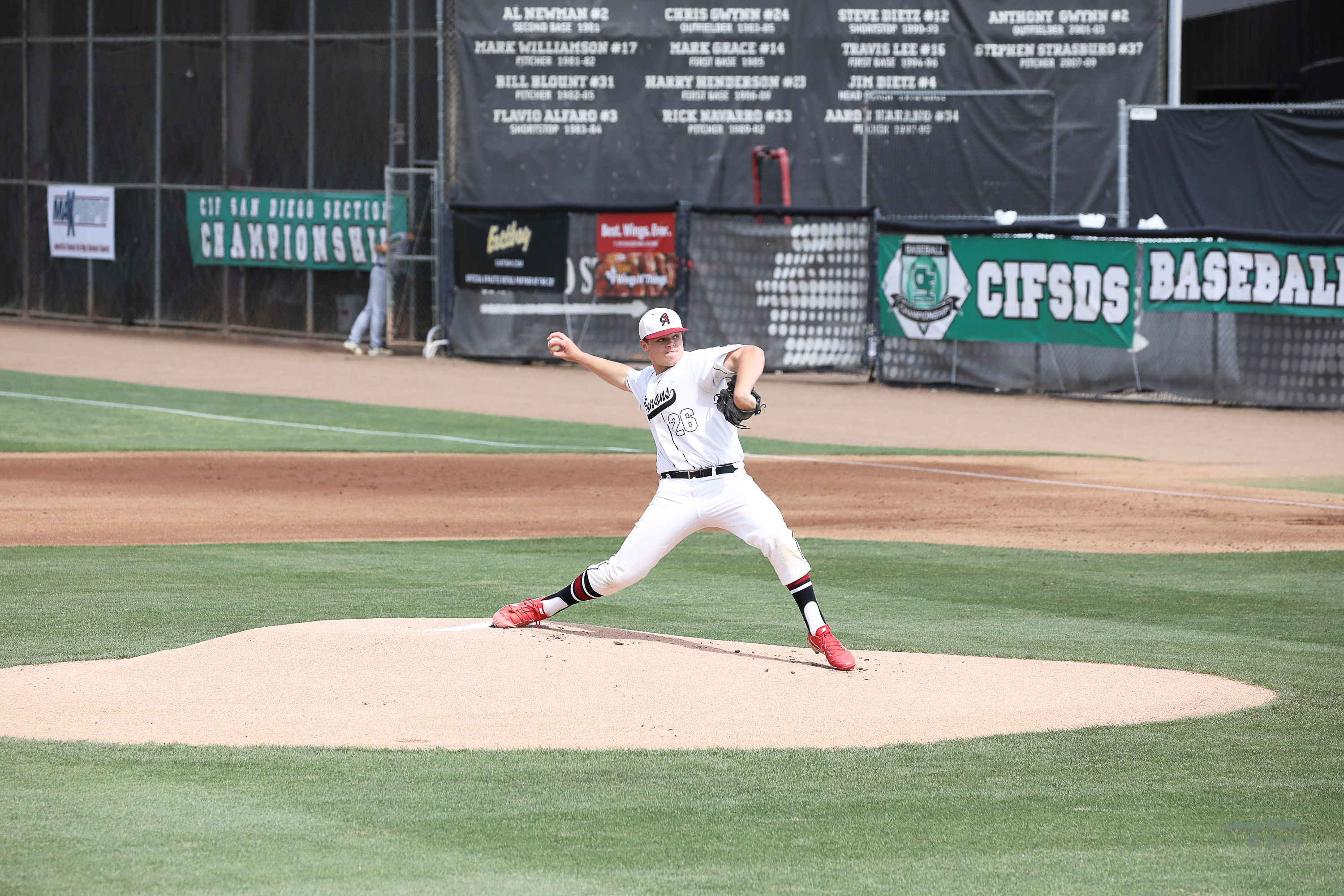 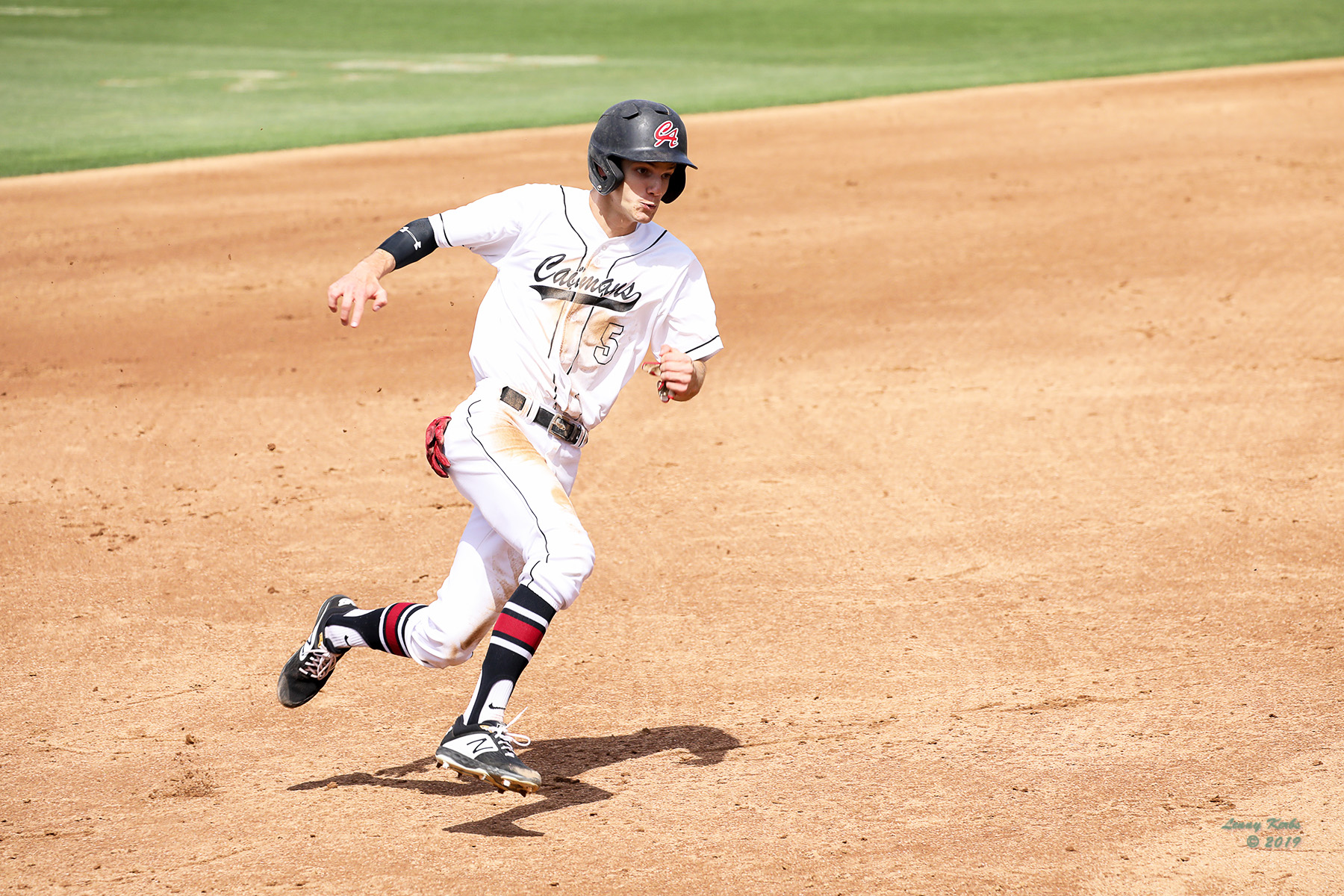 Classical’s Noah Dull prepares to round third before scoring the Caimans only run against Sage Creek.