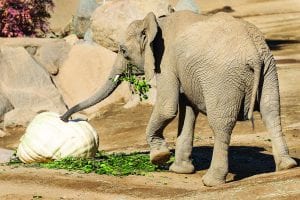 It’s fall, and the elephant herd at the San Diego Zoo Safari Park celebrated the season October 5, by chowing down on a massive pumpkin treat. The 370-pound prized pumpkin—donated by a private contributor—was cleaned out and stuffed with the elephants’ favorite treats, including cucumber, carrots, celery, and alfalfa pellets.

Herd members took their time eating all the yummy delights stuffed inside the pumpkin—getting at them through a hole at the top of the gigantic white gourd—before using their feet to smash it to pieces. The two youngest elephants were especially curious about the pumpkin, watching their older relatives eat it, and learning how to interact with the new food item. Animal care staff said surprising the elephants with the large pumpkin is a great way to encourage natural behaviors and witness the herd’s relationship dynamics in action.

“Providing them these opportunities to thrive sort of solidifies the social bonds and relationships in the herd,” said Mindy Albright, lead keeper, San Diego Zoo Safari Park. “Also, it keeps them searching their environment. Keeps them active and walking and thinking and being physical.”

The San Diego Zoo Safari Park is home to a large, 13-member elephant herd—one of the most genetically valuable African elephant herds in North America. The original group of seven was moved to the Safari Park in 2003 from Swaziland, after officials in that nation had scheduled them to be culled due to regional overpopulation. Since then, the herd’s numbers have steadily increased; and the success of this group at the Safari Park helped San Diego Zoo Global earn an award from the Association of Zoos and Aquariums for significantly enhancing the conservation of a species.

Elephants’ numbers are declining worldwide, as these animals are relentlessly hunted for their tusks—made of dentine, the same material as our teeth. Though the species is now protected by law, persistent poaching, illegal trafficking of ivory, human conflict and lack of food, primarily due to habitat loss and fragmentation, have led conservationists to list the African species as Vulnerable and the Asian species as Endangered on the International Union for Conservation of Nature’s Red List of Threatened Species.