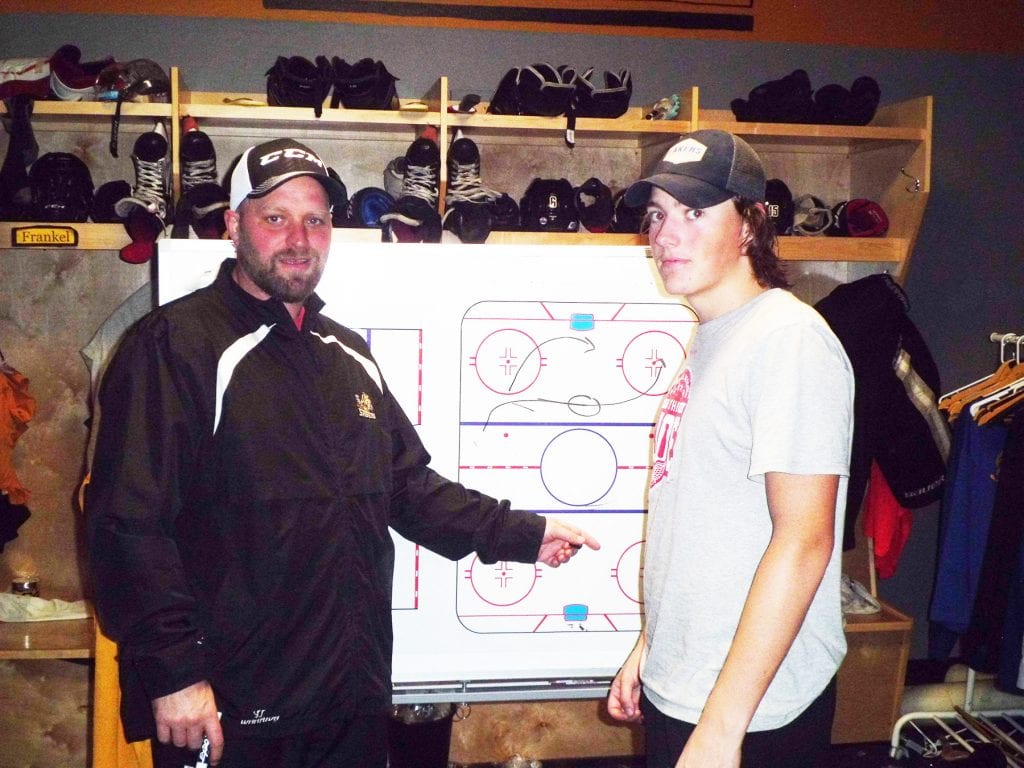 New head coach Chris Slater hopes to get the most out of talented players like winger Ashton Jones.

From all appearances, a new day as well as a new destiny is dawning for the locally based San Diego Sabers, a Junior A hockey squad that competes in the testing Western States Hockey League.

Saddled with an extremely young and inexperienced team last season, the Sabers labored to win games, securing only five victories in 51 outings. For San Diego, trying to gain any sort of traction in the rugged Western Division of the WSHL against the likes of the Long Beach Bombers and the Fresno Monsters proved to be exceedingly elusive.

But armed with a new coach, admittedly better personnel and a different vibe, the Sabers have already demonstrated things are trending upward in this still young 2018-19 season. Just 12 games into the current campaign, the Sabers (5-7) have matched their win total of a season ago while also proving their tenacity with a pair of overtime triumphs.

Just a look at the Sabers in practice is enough to suggest that their fortunes are seemingly headed in the right direction. Good in transition, accurate with their passing, seemingly strong on the puck and equipped with some swift skaters, it’s hard not to like what you see. A sense of hope and optimism is definitely in the air.

For the third time in three seasons, the Sabers made a coaching change at the top, this season bringing in 43-year-old Chris Slater who certainly has the credentials to orchestrate a turnaround for the hockey club he now oversees. Not only was the personable Slater a defenseman of note at Michigan State, but he also toiled for seven years as a pro in the AHL and ECHL. His coaching experience includes a stint at Western Michigan as well as being a head man in the North American Prospect Hockey League; U18 Midget Major AAA division.

Slater is not seeking to build Rome in a day but rather his intent is to get the Sabers to make steady, incremental improvement on a daily basis and by doing so, the results should take of themselves.

With a roster still somewhat in flux, Slater admits the Sabers are looking to add a couple more pieces that will prove to be good fits, add to the chemistry and help round out the lineup. But he’s upbeat about the team that is being assembled and sees no reason why his club shouldn’t be able to chase a playoff spot come springtime.

When asked to breakdown his squad, Slater was quick to acknowledge that he really likes the speed of his forwards, the dependability of his top-end defensemen and the potential of the goaltending.

There’s no doubt that the Sabers, though still considered to be on the young side, have some bona fide talent that should carry them through and lead to plenty more.

In Karel Kankovsky, S.D. has an all-around defenseman who is one of the league’s very best. A fine puckhandler who can skate, pass with aplomb and generates a hard shot, Kankovsky is also a strong defender who’s willing to hit and isn’t afraid to mix it up. A definite leader, he currently paces the team in scoring with 14 points (5G, 9A).

Right wing Jakub Vesely is a fast 6-1 specimen from the Czech Republic who can tear up the ice. A hard worker imbued with a quick release on his shot, he’s definitely a player to keep an eye on as his 13 points (6G) would attest.

Hailing from Michigan, youthful left wing Ashton Jones leads the team in goals with seven. Stronger than he looks and ever improving, it’s Jones’s skating ability that sets him apart, allowing him to create more than his share of scoring chances.

Tyler Balok and Zakary Hanaford have also shown well, combining for 14 points while suggesting they are just beginning to scratch the surface of their potential.

Two other players who certainly merit mention are relative newcomers, defensemen Chace McCardle and Dallas Klaassen. McCardle’s forte is that he’s really strong at both ends of the ice while Klaassen is a good skater who can use his long reach to considerable advantage.

Though four goaltenders have seen action thus far, Aleksei Vereshchagin from the Russian Federation has been the most active between the pipes. At 6-foot-1, Aleksei covers a lot of net and he’s demonstrated signs of his vast potential while posting a 3-2 record and .911 save percentage.

Others goalies who are definitely in the mix for playing time are Marshall McKallip and Tomas Svoboda while young Swede Ian Wigton is thought to be more of a developmental prospect at this stage.

Though he’s dealt with an injury, Svoboda is known to be strong, quick and competitive. As for McKallip, he’s a scrapper from Michigan who has registered a 1-3 record to date.

Ultimately, Slater wants to settle on either one or two goalies but he hasn’t ruled out a possible three-man rotation if that’s what works out best.

Though Slater realizes that wins and losses are undoubtedly important, he sees as his foremost goal the development of his players (aged 16 through 20) so that they might eventually snag a college scholarship or some other opportunity to further their hockey careers.

Indeed, the Sabers have the look of a squad now capable of holding their own, finding their way and bringing a bit of showtime to the Iceoplex in Escondido. “If the fans come out,” informs Slater, “I think we can give them some real entertainment with a wide open style that will hopefully display our skill.”

Yes, all indications point to a new day for the Sabers and perhaps the dawning of a new era for local hockey as well.