Sabers show their fight despite 5-1 loss to Fresno 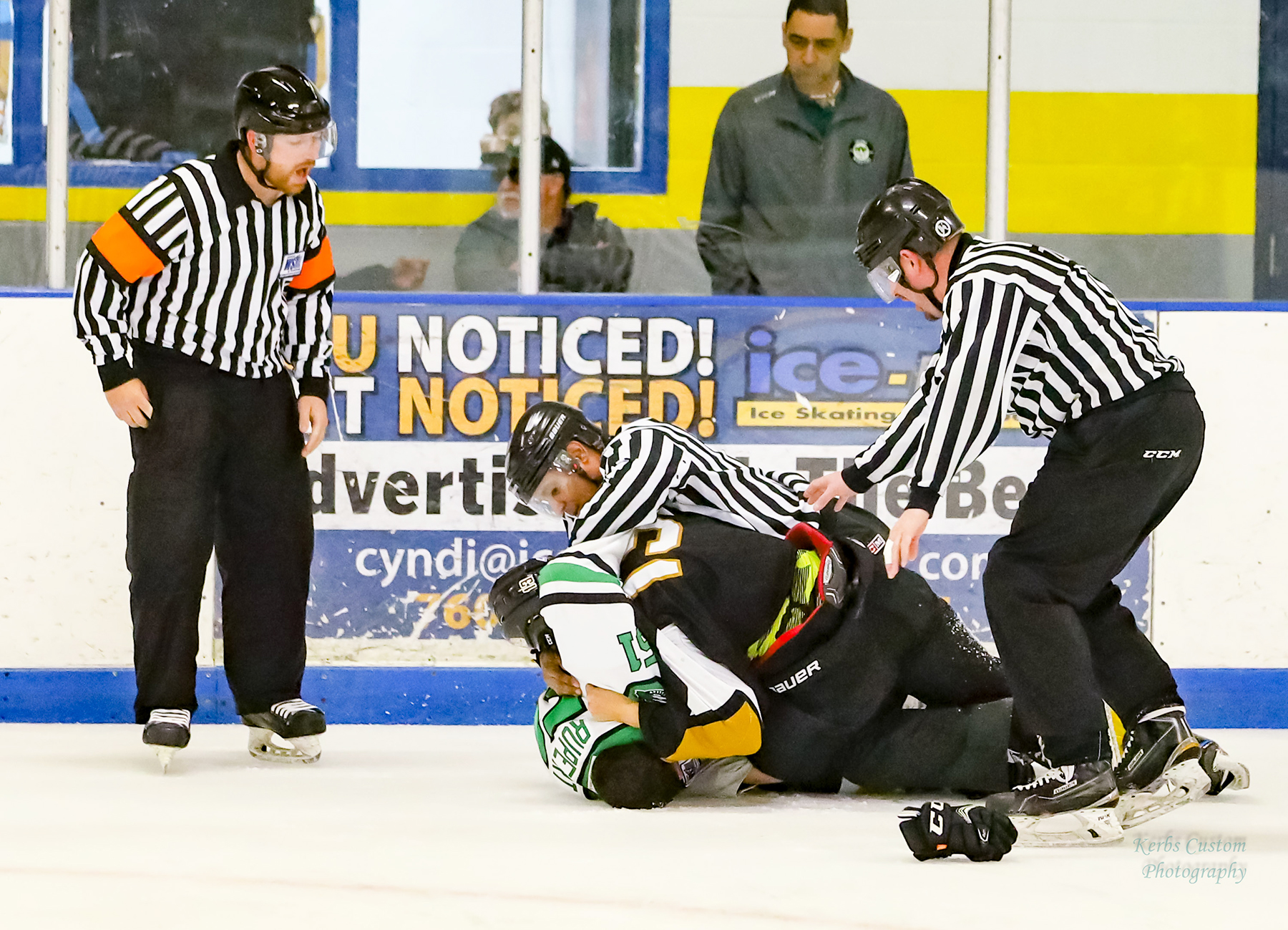 As the referee looks, the linesmen move in to break up a scuffle between the Sabers’ Jakub Vesely (on top) and Fresno’s Emmett Rupert.  (Lenny Kerbs/Times-Advocate)

Though the San Diego Sabers were beaten last Sunday afternoon in their final home game of the regular season, it is important to note that they refused to be beaten down. And that fact should hold them in good stead once the Western States Hockey League playoffs commence.
Yes, the 5-1 setback suffered at the hands of division rival Fresno was hardly the outcome the Sabers were looking for when they took to the ice against visitors from central California at the Escondido Iceoplex. After being on the short end of a 4-2 count the previous night, SD was hoping to give the visiting Monsters something to think about on their lengthy bus ride back home.
But after falling behind 4-0 with just 14:30 having been played, it seemed as though the Sabs would be the ones left to do some serious contemplation about what had transpired.
Moreover, once the relentless and talented Monsters had secured that sizeable lead, they seemed intent on burying the Sabers with a brand of chippy play that smacked of extracurricular activity and overkill. Apparently not just satisfied with a victory, Fresno appeared desirous of laying a good old-fashioned whopping on the locals.
But sorry Fresno, it was no go because the gritty Sabers weren’t of a mind to allow such a thing. Bouncing back with a solid effort in the final two periods and not backing down from the Monsters’ ratcheted up aggression and physicality, the Sabs made a strong statement that they won’t ever pack it in or get shoved around without a fight.
And manning up in that manner was huge because this coming week these same two teams will again confront one another – this time in a best-of-three Western Division semifinal series to be held in Fresno. “I thought after the first period, we recovered well,” said Sabers’ head coach Tomas Kapusta. “And I think we sent a message with how we protected and stood up for each other.” 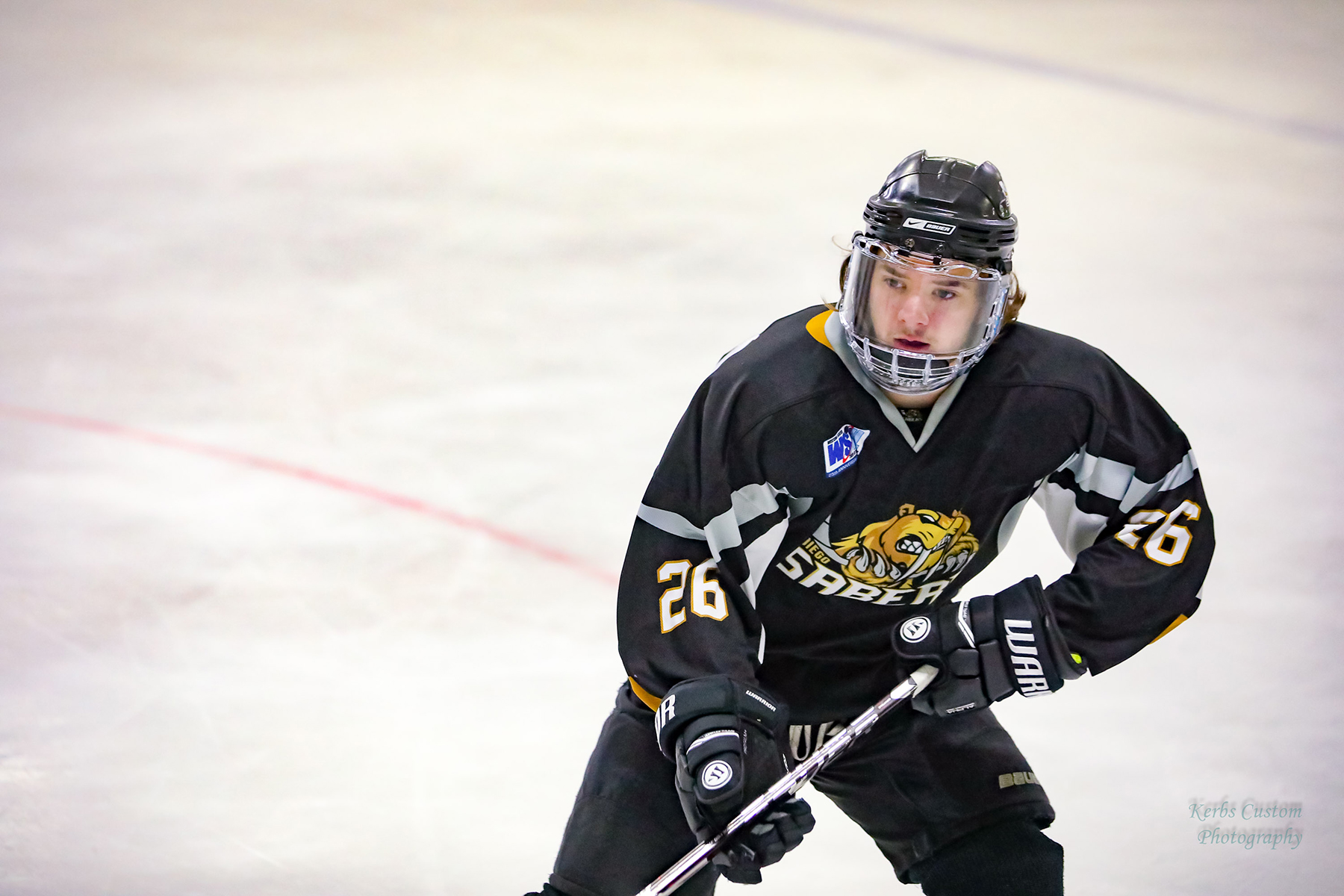 SD winger David Grindstaff was a force against Fresno, tallying a goal and looming as a constant scoring threat.     (Lenny Kerbs/Times-Advocate)

With their victory, the second-place Monsters (behind Long Beach) ran their record to a splendid 31-16-3-1 while the Sabers – who have registered 12 more wins than last season – now sit at 17-26-4-3 with one game remaining against Valencia before the postseason.
Early on, the Monsters were ignited by their clever and productive forward Petr Philippov (33 goals, 42 assists). At the 15:08 mark of the first period, the 5-8 Russian collected the puck from in tight and then using a sublime backhand, hoisted the puck into the top left corner of the net past helpless SD goaltender Aaron Parsons.
And just over three minutes later, he was back at it once more. After receiving a supreme crossing pass from linemate Jeremy Valazquez –who would register three assists on the afternoon – Philippov again had an opening and he made no mistake with a snapped wrist shot.
Then it was Zack Turpin’s turn to get offensive. Ripping a bullet from inside the left faceoff circle, his perfectly placed roof shot only added to Parsons’s torment.
Fresno’s final goal of the initial stanza came with less than six minutes remaining when defenseman Logan Domagala also went high on Parsons and clanked one off the iron and into the twine. It was at this stage that Kapusta relieved his besieged goalie and replaced him with Marshall McKallip.
In Parsons’s defense, three of the four shots that eluded him were the result of lasered shots but his body language suggested that he just wasn’t sharp. And it was clear that the Monsters had made it a definite part of their game plan to go upstairs against the young netminder.
It had been a disappointing opening twenty minutes for the Sabers with their attack generating few quality chances and the defense getting caught up ice. “We didn’t play well on the defensive end,” shared Kapusta. “We allowed too many 2-on-1s.”
The first period also had a decided edge to it, with confrontation and scuffles a common occurrence. SD forward Jakub Vesely got into an intense scrum with Fresno’s Emmet Rupert while the Sabers’ Ashton Jones and the active Turpin mixed it up a bit. Meanwhile, Fresno’s Stanislav Danaev behaved as if someone had stolen his girlfriend, racking up two minor penalties before being assessed a five-minute major. Saying he was angry wouldn’t have adequately described his surly attitude.
Coming back after the first intermission, the Sabers began demonstrating some poise and presence while more than holding their own. And 4:50 into the second period, the home team finally lit the lamp. Taking an accurate cross-ice feed from the gifted Karel Kankovsky, right winger David Grindstaff showed a quick release and buried the puck behind Fresno goalie Max Karlenzig.
And for a while, the Sabs continued to press the issue, looking to close in even further. But their momentum was eventually blunted when Fresno’s Swedish forward Gustaf Wranghede, all by his lonesome out in front, deftly elevated a shot that beat McKallip up top. Though there was still more than more than a period and a half left to play, this goal brought an end to the scoring at 5-1.
Thanks in large part to McKallip’s solid work between the pipes, the Sabers had settled down and found some confidence. The 18-year-old from Pittsburgh made a number of impressive saves including stopping Valazquez on a breakaway, repelling a blast from the point by Jackson Bauml, stuffing Blair Maguire on the doorstep and then denying Valazquez again on a ticketed slapper. In the meantime, Grindstaff was conspicuous at the other end, looming as a threat and creating a couple of good chances aside from his goal. 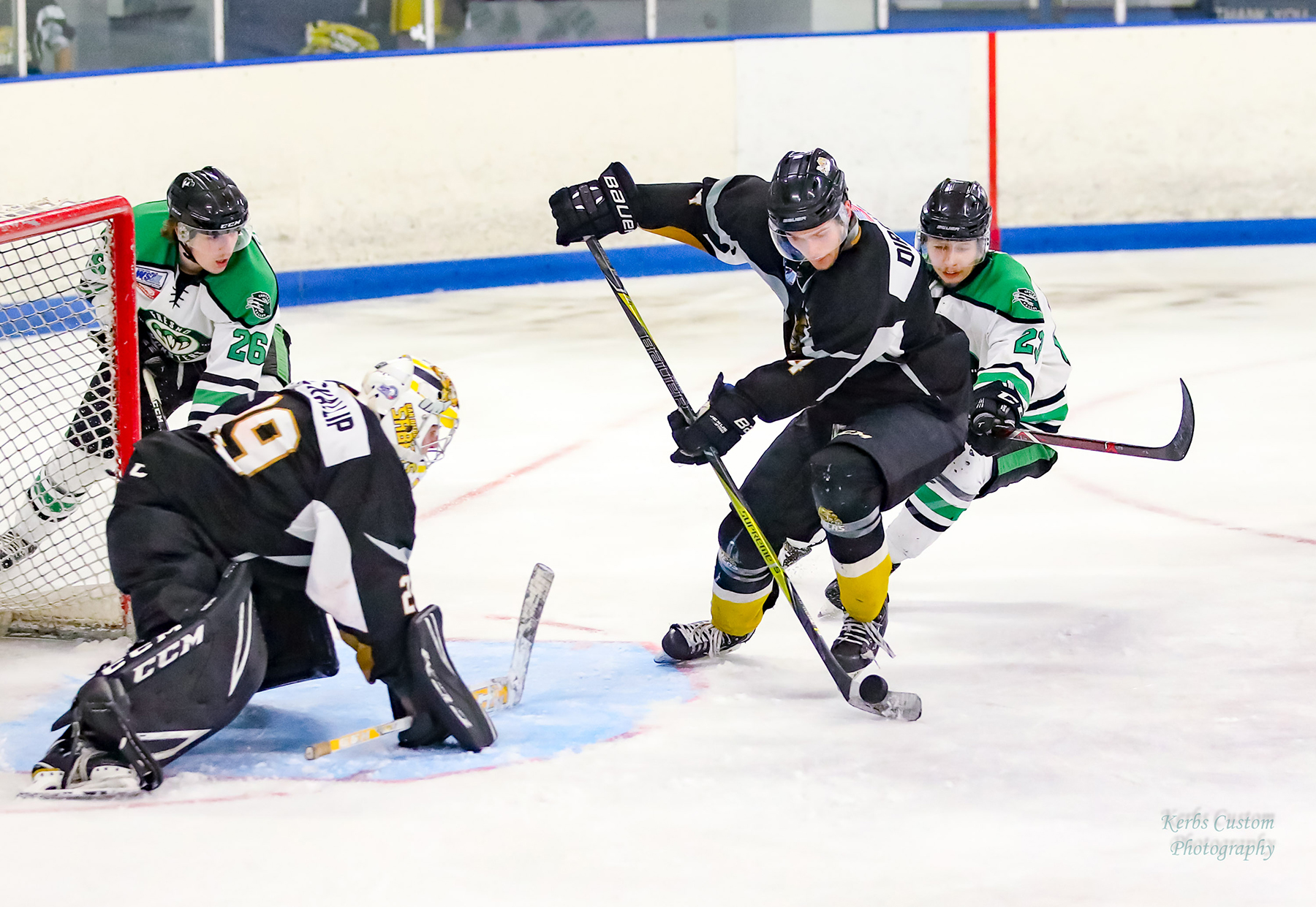 Though the final twenty minutes offered no additions to the scoresheet, it nonetheless had its share of action. McKallip (27 saves) continued his notable work with a nifty stick save on Valazquez and a nice stop from in close to deny Wranghede. His counterpart Karlenzig also had his moments while stopping 18 shots in the third period – particularly when the Monsters were shorthanded. Karlenzig turned aside four testing wrist shots, including a pair from Kankovsky, who was flying up the ice on some daring rushes.
And not surprisingly, the feistiness that had come to define this contest didn’t dissipate. First it was the ill-tempered Danaev and SD blueliner Bryce Dirscherl – coming to the defense of a vulnerable teammate – who rumbled. Then late in the proceedings, a clash broke out between the Sabers’ Jones and Valazquez as well as another that pitted SD’s Isaiah Frankel squaring off with Maxim Gorshkov. Needless to say, what transpired on the ice this day hardly resembled a lovefest.
Entering the playoffs as a decided underdog, the Sabers are fully aware they will be challenged to the max when they travel north to engage the Monsters. But despite the 9-2 edge that Fresno recorded over the Sabs during the regular season, two of those losses were by a single goal and in a pair of others SD hung exceedingly tough. There is no doubt in Kapusta’s mind that his club can compete against this accomplished foe. “We can definitely play with them,” the coach says with conviction.
And there’s also one undeniable factor that should enhance the Sabers’ chances. As they proved on Sunday, they won’t buckle or retreat in the face of Fresno’s attempts to intimidate them. San Diego is prepared to match the Monsters hit for hit and if need be, blow for blow. Should they do that, then the Monsters shouldn’t be all that frightening and any outcome is possible.