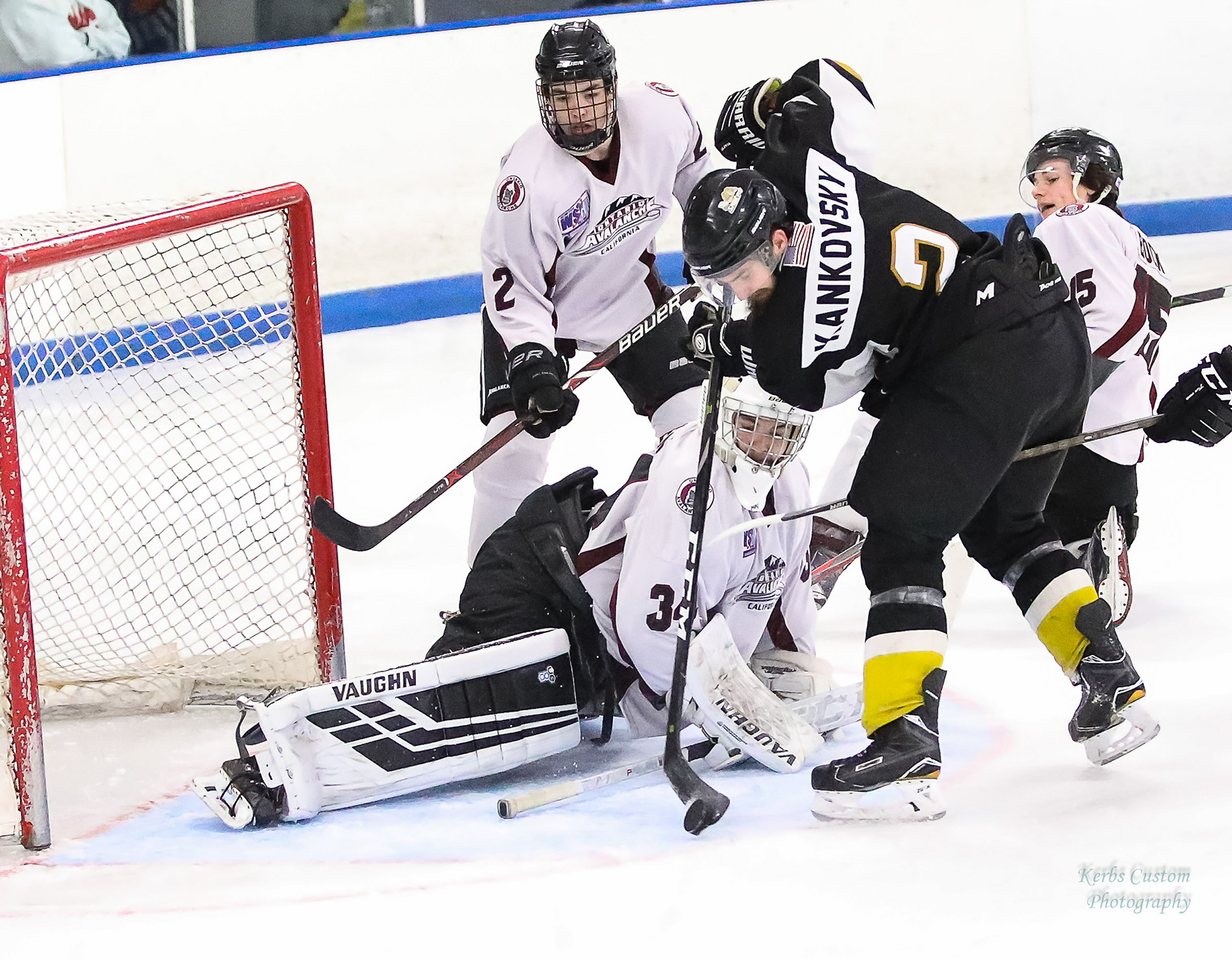 A telltale sign that a team is improving, starting an ascent and becoming more assertive occurs when it regularly gets the best of opponents it should beat.

By all appearances, the Escondido-based San Diego Sabers appear to be reaching that state. By completing a three-game sweep over Valencia and Ontario – the two clubs bringing up the rear in the Western Division standings of the Western States Hockey League – the Sabers clearly demonstrated they can take care of business against those that they must consistently conquer if they’re to experience a successful season.

What made the Sabers’ Friday-through-Sunday performance even more noteworthy was the fact that it was accomplished with a depleted roster since a number of key San Diego performers were absent due to a variety of reasons including injury and suspension.

Their diminished status notwithstanding, the Sabers nonetheless answered the call with 5-2 and 3-2 victories over the Flyers before wrapping up an undefeated weekend by virtue of an entertaining 4-3 Sunday afternoon triumph over the Avalanche at the local Iceoplex. “We were definitely dealing with some injuries,” admitted head coach Chris Slater, “but we were able to survive because other guys did a really good job of stepping in and delivering when we needed them.”

And a result of their recent surge, the Sabers have now won four in a row, improved their overall mark to 9-12-3-1 (34 pts) and solidified their hold on third-place in the division. Moreover, with just half the schedule having been played, San Diego has nearly doubled its win total from last year’s long and trying campaign. Without a doubt, the Sabers have the look of a group positioned for a significant turnaround/resurgence in 2018-19.

Of the weekend’s victories, it was the Sunday affair that produced the most drama. But thanks in great part to a two-goal outing from productive forward Ashton Jones and a yeoman job in net by emerging 17-year-old Marshall McKallip (43 saves), the Sabs seized a sizeable lead before holding off a spirited Avalanche comeback bid to keep their current roll going.

Jones (13G) got things started when he sped down the left side and collected an amazingly accurate long-distance feed from forward/defenseman Tyler Balok. Steaming over the blue line, Jones moved in alone on Ontario goaltender Will McEwen and after giving him a nifty shake-and-bake move, slipped the puck into the net with barely over three minutes having expired. “I got a great saucer pass from Tyler, went hard to the net and put it in,” Jones explained of his opening salvo.

With the Sabers continuing to mount heavy pressure, it would take just another 1:41 for the hosts to add to their advantage. Taking a nice set-up pass from Sean Devaney, shifty winger Isaiah Frankel displayed artful stickhandling down low that positioned him around the crease before he beat McEwen with a well-placed shot that had San Diego on top 2-0.

However, in what seemed like an instant – 13 seconds to be exact – the Avs responded when physical forward Charles Riordon got loose out in front and whistled a wrister past McKallip that got Ontario back within one. 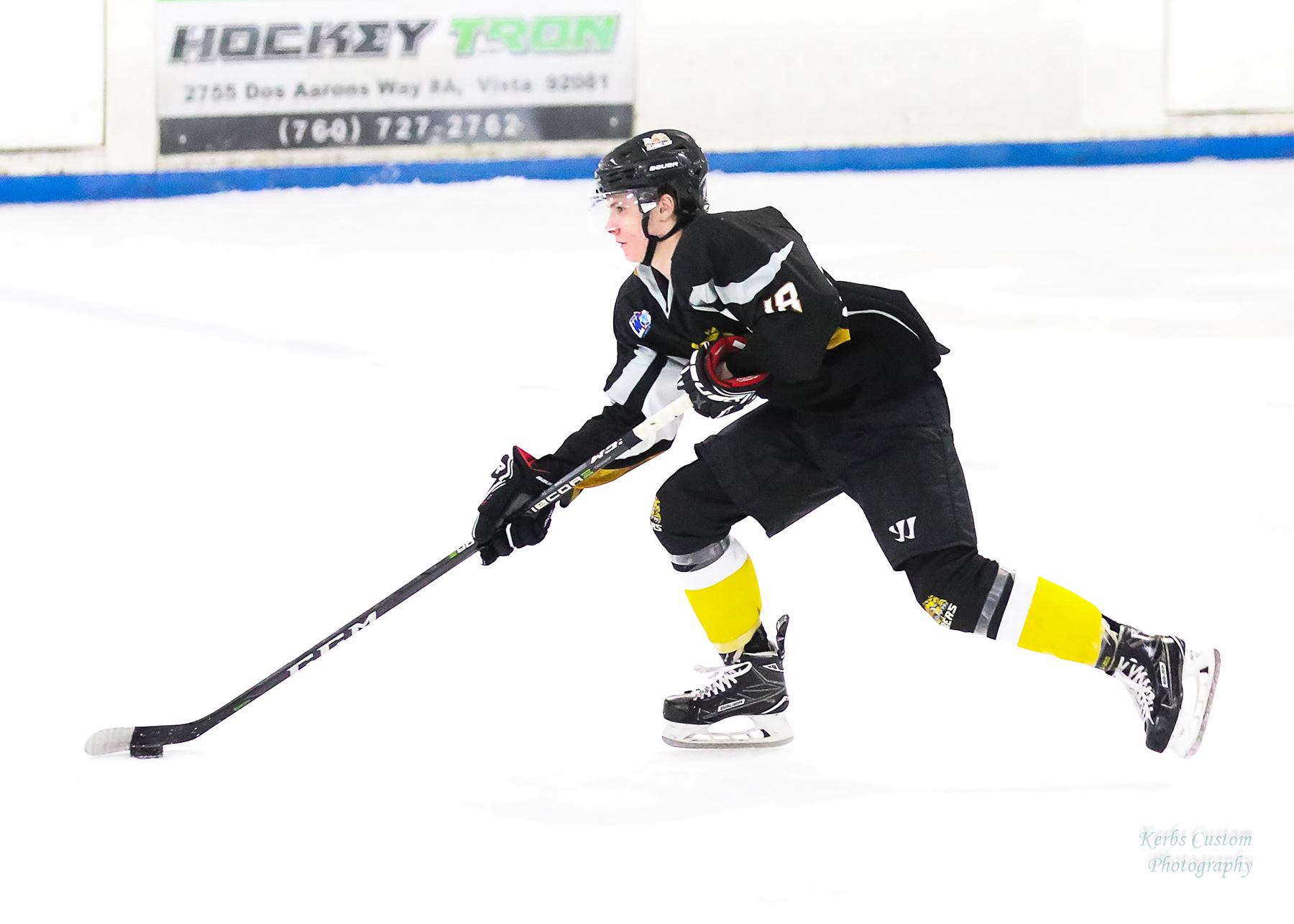 Forward Ashton Jones was the Sabers offensive standout with a pair of goals during Sunday afternoon’s clutch win over Ontario.

But San Diego’s Jones would provide an answer of his own at the 8:54 mark when his perseverance was rewarded. After McEwen blunted him with a save from in tight, Jones stayed with it, calmly gathered up the rebound and once more sent a puck behind the Ontario goalie.

And a short time later, it looked like “Along Came” Jones was going to do it again, dashing in on a breakaway only to lose control of the puck as he was about to execute a fake. “Oh yeah, that was frustrating,” said Jones. “I was trying to do a move and I just whiffed it. But sometimes that kind of stuff happens.”

Though Jones missed out on his attempt at a hat trick, his teammates picked him up with yet another tally as the period was winding down. From the left point, the talented Balok spied newcomer Josef Kankovsky all by his lonesome at the right side of the cage. Once more Balok authored a sweet assist that the unencumbered Kankovsky neatly tapped behind McEwen to make it 4-1. At that stage, the Sabers appeared all but unstoppable.

But with just 1:40 left before the first intermission, the Avs showed they weren’t going away when hustling forward Jeremy Van Dyke batted a rebound past McKallip that closed the gap and renewed the hopes of the visitors.

It had been an action-packed 20 minutes with plenty of scoring chances and several rushes that seemed to suggest more of the same would be in the offing. But surprisingly, only one more goal would be scored while it would fall on the shoulders of McKallip to come up big in order to keep the Sabs out in front.

Though the second period produced no scoring, it nonetheless had its moments. McKallip was particularly sharp when he gloved a dangerous shot off the stick of Justin Davis, stopped Van Dyke’s wrister from the slot and then turned aside a pair of promising chances from forward Eric Moran.

Meanwhile, the Avalanche turned much of their attention into trying to body Jones. It was obvious that the 18-year-old from Michigan was a high priority target as the visitors sought to hit him at every turn. Their focus reached a boiling point when after the whistle blew, Avs’ center Mason Kohn roughed up Jones from behind and starting throwing punches.

When asked about the run-in that later morphed into verbal gunfire being exchanged in the penalty box, Jones discussed it matter-of-factly. “He just kind of let it go after we were battling each other in the corner,” Jones remarked. But instead of engaging Kohn in fisticuffs, Jones wisely skated away to avoid extended punishment in the sin bin while Kohn was eventually assessed a 10-minute major. “Besides,” Jones added with a slight smile, “he’s a lot bigger than me and to tell the truth, I’m not really the fighting type.”

Ironically, two seasons ago the gifted Kohn was a 16-year-old wunderkind of sorts with the Sabers and developed into a fan favorite. Since then he has matured physically in a most conspicuous fashion while becoming even more skilled. 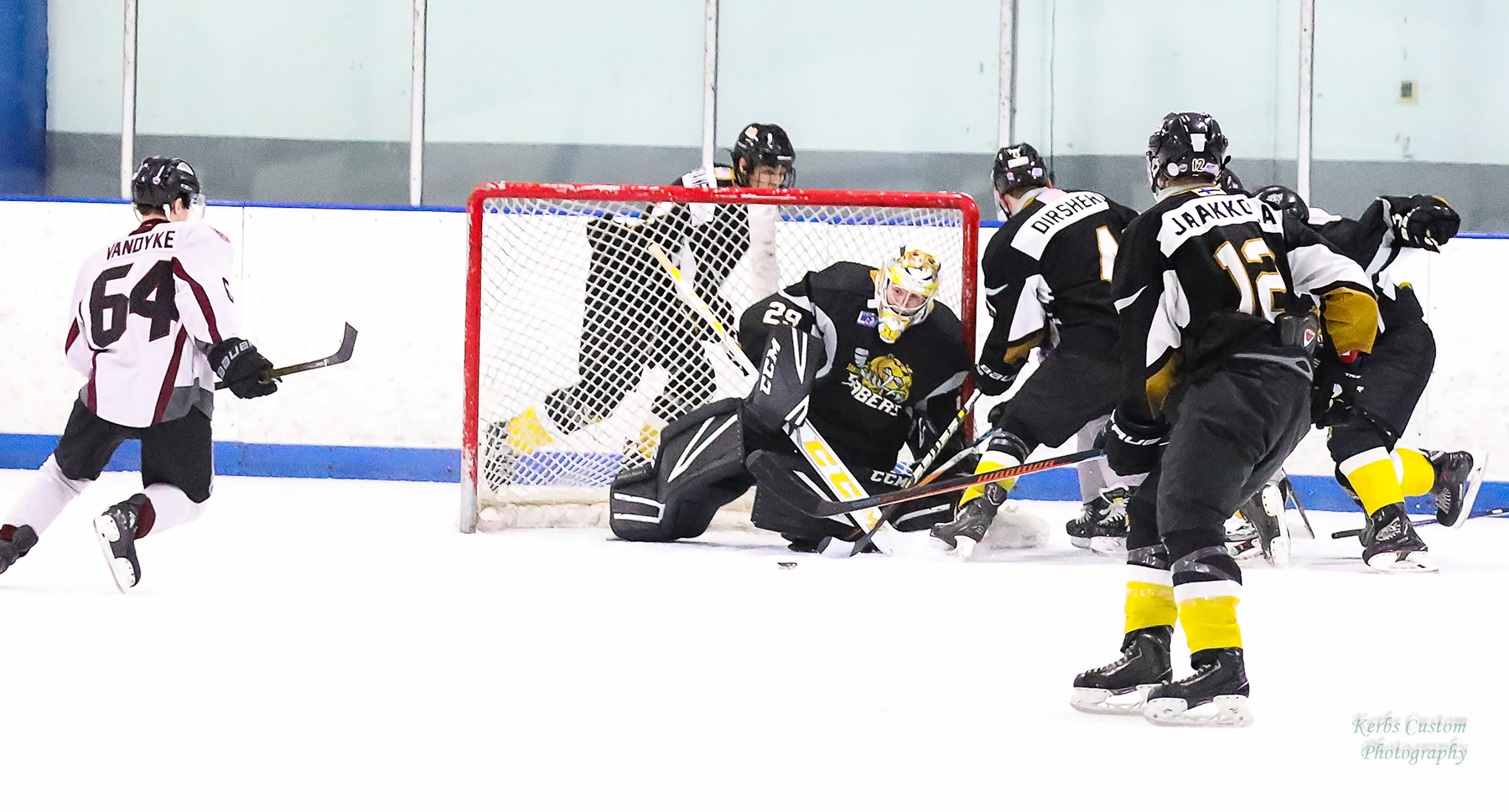 Early in the final period and with the left side of the net wide open, Moran buried a straightaway shot from a comfortable distance that drew Ontario to within one at 4-3. But that’s how matters would stay thanks to the clutch play of McKallip whose superb save on Nicholas Abernathy from out in front was an act of outright robbery that helped preserve the victory.

In addition to the heroics of Jones and McKallip, other Sabers were highly instrumental in the win. Both Balok and the active Jakub Vesely (who paces San Diego in scoring with 33 points) were vital offensive pieces with two assists apiece. Meanwhile, aside from his pivotal goal, Frankel logged plenty of minutes and was a constant threat.

And then there was defenseman extraordinaire Karel Kankovsky. Seemingly never off the ice, Kankovsky was a feast for the eyes as he did it all – taking off on daring rushes, authoring accurate passes, backchecking with purpose, delivering forceful hits and often dominating the proceedings. Currently, there’s not a more compelling or versatile athlete who’s doing his thing in Escondido than the 20-year-old Czech native.

The significance on what the Sabers accomplished certainly wasn’t lost on their coach. “For sure, it was important for us to take the points at home against those two teams,” Slater said. “We’ve still got a lot of work to do but I think we can definitely improve and get much better, especially when we get guys like (Samuel) Kapusta, (Cole) Profitt, (David) Grindstaff, (Riley) Cryan and (Zakary) Hanaford back in the lineup.”

When that happens, division frontrunners Long Beach and Fresno would be well advised to take notice because the Sabers give all the appearances of a club that’s clearly on the come.

One response to “Sabers show signs of emergence with weekend sweep”