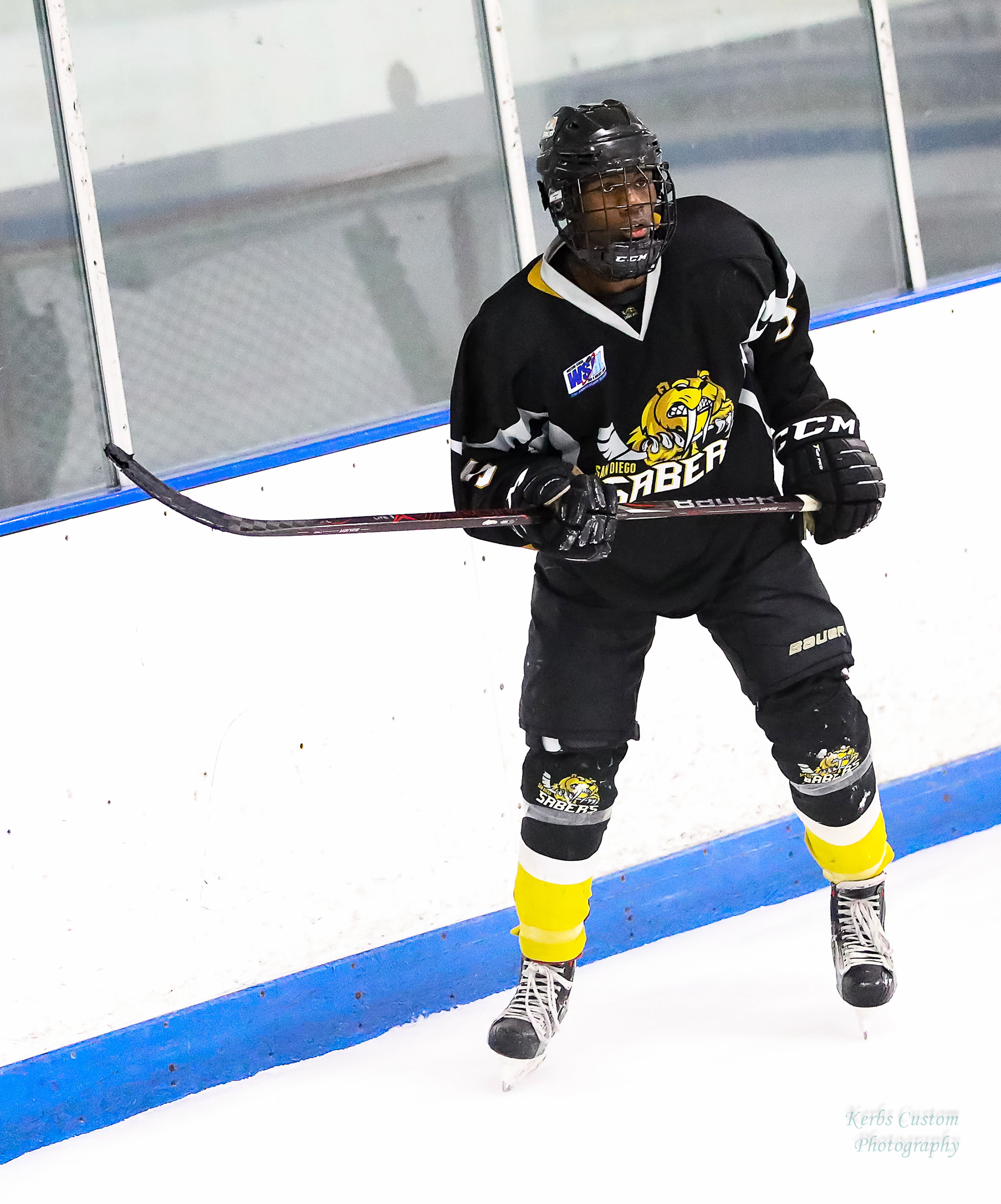 Forward Isaiah Frankel played well on Sunday and scored one of the two Saber goals in Friday night’s opener against Ogden.

Last weekend they descended upon Escondido from their 4,301-foot fortress in northern Utah. They arrived as ravenous and insatiable beasts, untamed, running wild and virtually unchecked.

They answer to the name of the Ogden Mustangs, undisputed titans and the exalted royalty of the 23-team, five-division Western States Hockey League. They are scary good and at times make juggernauts like the 1927 Yankees or the Golden State Warriors look like pikers by comparison. It’s gotten to the point where their opponents almost expect to get buried whenever they appear. And why not? Whenever these conquerors from on high take to the ice, they bring with them not only a ton of talent but an avalanche of goals as well.

So it was to this stampeding herd that the San Diego Sabers played host for a three-game series that took place at the Iceoplex. Who would have blamed the locals if having their wisdom teeth pulled would have seemed a more appealing prospect. Though the Sabs have shown plenty of spunk, upside and growth during the current season, some observers nonetheless wondered if they were in for a blood-letting. Trying to survive, let alone keep up with the intimidating visitors from the Mountain Division of the WSHL would prove to be the ultimate challenge.

If anyone doubted the daunting task ahead, all they needed to do was consult the standings where the rampaging Mustangs had amassed an incredible 33-1-0-1 record while riding a 14-game winning streak. At any level, that kind of near perfection over an extended period of time is absolutely astounding. Ogden was simply dominating like nobody’s business.

And living up to the considerable hype that preceded them, the Mustangs showed no ill effects from their long journey south, rolling to an 8-2 Friday night win that would have been even more substantial had not San Diego netminder Marshall McKallip turned in a gritty performance with 53 saves. Highlights for the Sabers included a game-opening goal from Aleksis Leskinen and a score from forward Isaiah Frankel.

But instead of being overwhelmed, buffaloed or cowed by what had happened the previous night, the Sabers came out hard on Saturday and played with a conviction that they could compete with as well as push the vaunted Mustangs. And much to their credit, that’s exactly what they did, trailing by only a goal entering the final period before Ogden put three on the board to emerge with a hard-fought 5-1 decision. Again it was the active 17-year old Leskinen, a native of Finland, who shone for the Sabers with his second goal in two nights. 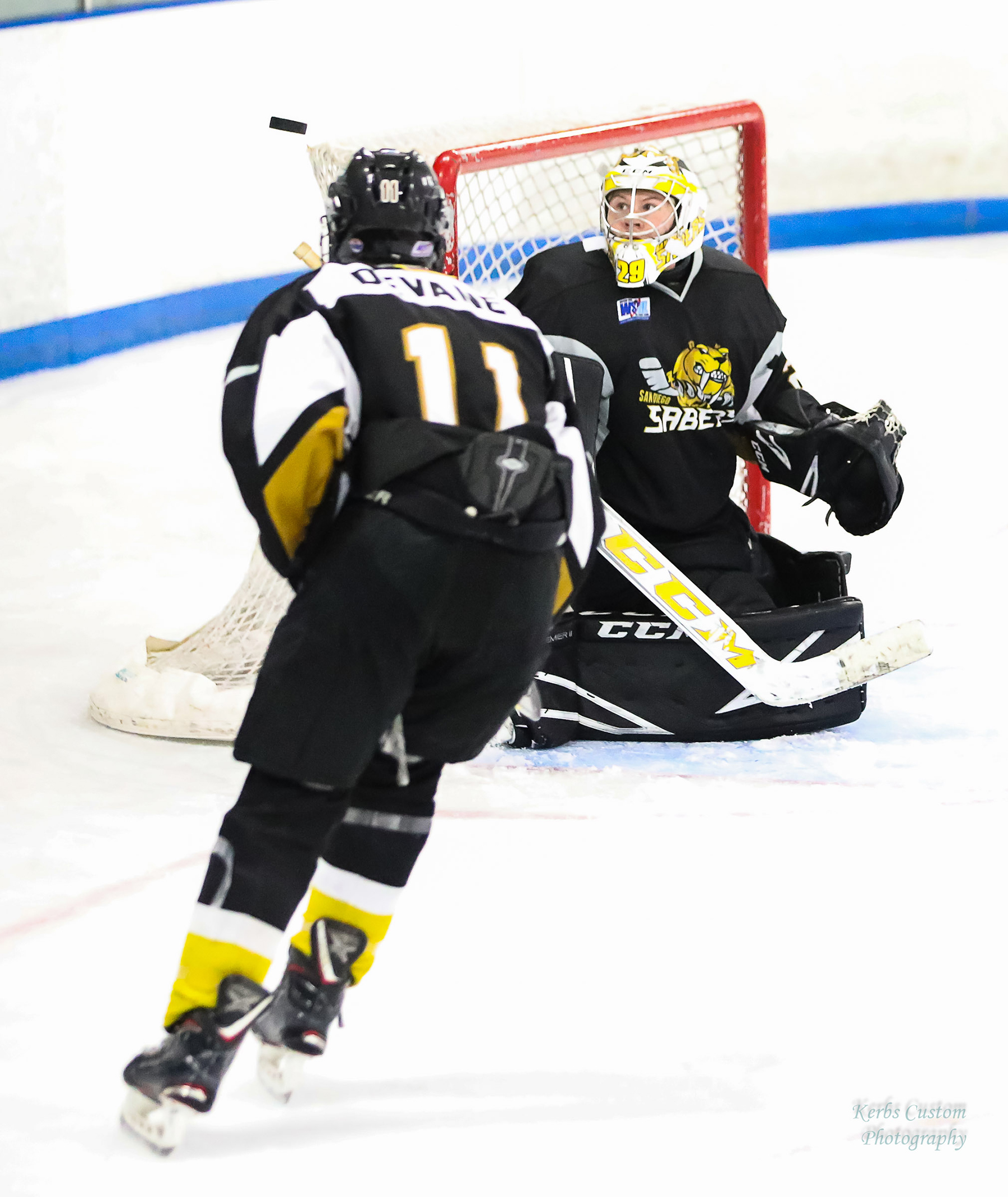 While teammate Sean Devaney looks on, SD goalie Marshall McKallip intently eyes a shot as it sails wide of the net. McKallip registered a whopping 69 saves in Sunday’s home loss.

So as the puck was about to be dropped for the series finale, the Mustangs – adorned in red helmets and pants in addition to colorful striped jerseys – looked to be oozing with a confidence that comes with having won 16 straight. As for the Sabers, their black uniforms seemed apropos since those duds seem to reflect a stark determination not be awed and to prove they could continue to test the league’s most heralded team.

But for most of the first 14 minutes of action, Ogden dominated in possession time and often kept the Sabers penned up in their own end. With their notable speed, the Mustangs were getting to most of the loose pucks and seemed to be swarming everywhere. However, the poised McKallip was rock solid as he repelled dangerous stuff attempts by Rhett Rampinelli and Bryson Bartell before making a sparkling save on a blistering shot from the slot from forward Bobby McKinley.

Then rather unexpectedly, given the way things were trending, the Sabers seized the moment and lit the lamp. After Leskinen sent the puck goalward, it laid unattended near the crease until an alert Josef Kankovsky banged it home past Mustang goalie Artur Ogandzhanyan at the 5:11 mark. For the second time in the series, SD tallied first.

But this opening salvo by the Sabs only served to ratchet up Ogden’s intensity. Less than a minute later, Rampinelli slid a sweet feed over to Bartell who buried a slapper into an open left side to knot things up.

Now the Mustangs were surging and it wasn’t long before they scored again, this time thanks to McKinley who pounced on a loose puck from in tight and snapped it into the back of the net.

But shortly thereafter, the Sabers offered their own timely reply that deadlocked matters at 2-2. Busting out on a 2-on-1 rush, Jan Sokolik deceptively looked to his right as if preparing to pass but then unleashed a perfectly placed wrist shot that found the upper left corner. Sokolik’s score not only juiced the home crowd but continued to feed the Sabers’ belief that they could hang with— and perhaps even upend—the seemingly invincible Mustangs.

Remarkably, the game’s first four goals had the feel of a tit-for-tat exchange, with all of them being scored within a compressed time span of 3:05.

And things got even more fascinating early in the second period when San Diego came out buzzing and forged an unexpected 4-2 lead by virtue of a pair of power play goals. The first was the result of the productive Kankovsky rifling the puck where the screened Ogandzhanyan couldn’t find it.

Less than two minutes later, Leskinen continued his stellar play when, while gamely fighting off a defenseman at the doorstep, he neatly put the biscuit in the basket. With his third goal in as many games, the Finish “Flash” had conclusively proven that the Mustangs were no mystery to him.

But though they would hold that lead for nearly five minutes, the Sabers knew they were about to get Ogden’s best punch. Reflecting their composure and unshakeable assurance, the Mustangs merely dug in and shifted into a different gear. And then the retaliation began.

Benefitting from a man advantage, McKinley notched his second goal of the day when he jumped on a rebound out in front and made no mistake. Next it was Shane Gilbert’s turn to step up and he did so with an exquisite laser shot that beat McKallip top shelf. Finally, it was left to Aidan McAleer to put his club back on top 5-4 when he accepted Ian Currie’s ice-skimming pass and wristed a winner that McKallip couldn’t handle. It had taken the aroused Mustangs just over eight minutes to wipe out their deficit and get back on top.

In the third period, the Sabers hopes of getting the equalizer were undermined by having to kill a pair of relatively early penalties. And when the prolific Rampinelli (45G, 51A) maneuvered through some congestion and tapped in a chippie, San Diego’s dream of corralling the Mustangs was all but extinguished. Rampinelli finalized the scoring at 7-4 when he gathered in a breakout pass and glided in by his lonesome to put away an empty-netter.

In defeat, a number of Sabers had certainly done themselves proud but none more so than the indefatigable McKallip, who registered a staggering 69 saves. He stood exceedingly tall in the face of a tidal wave of rubber directed his way.

Known for his rebound control, ability to play the angles and communication skill on the ice, the still 17-year-old backstop looks to be on the right track to eventually realize his ambition of playing somewhere at the Division 1 college level.

When asked about what it was like to confront the thundering Mustangs, McKallip was quick to compliment them. “There’s no doubt they’re an exceptionally fast team and they do a super job of keeping the puck moving,” he praised. “And their team chemistry is really great.”

But then he couldn’t help but throw out some plaudits in the direction of his own club. “Hey, we really competed hard in this series,” he began, “and we proved in the last two games that we can contend with the very best in this league. And that should really help us in the future when we go against the top teams in our division (Western) like Fresno and Long Beach.”

Maybe in the end, both the Ogden and San Diego (13-18-3-1) squads made their points. For the Mustangs, they left with their reputation as a superior, spectacular and relentless hockey team very much intact. And for the Sabers, who knows the confidence they’ll derive from knowing that they can go eye-to-eye with heavyweights like the Mustangs and not blink?

No, the Mustangs weren’t stopped on their continued pursuit of greatness but it’s for sure the Sabers, at the very least, gave them something to think about! 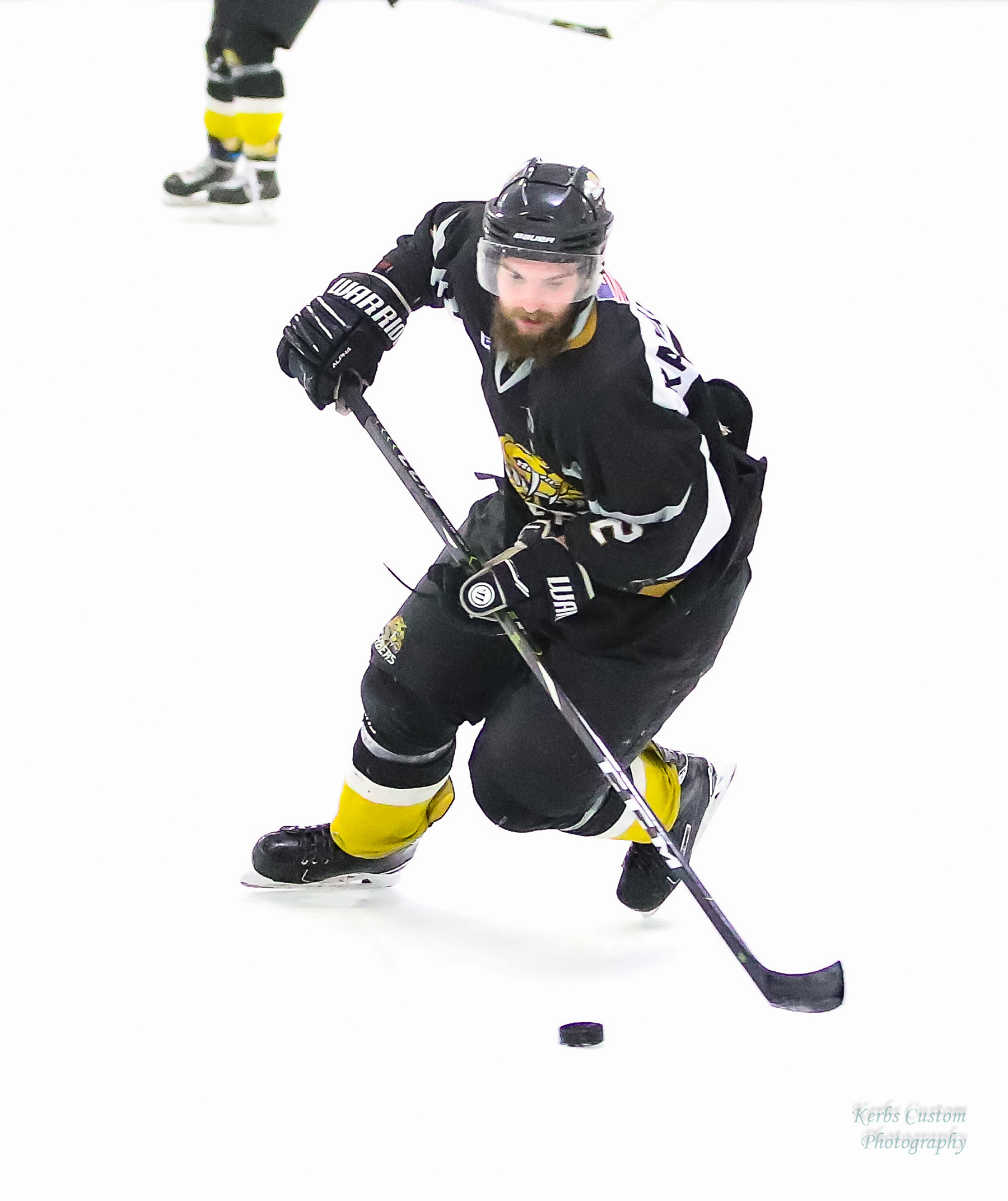 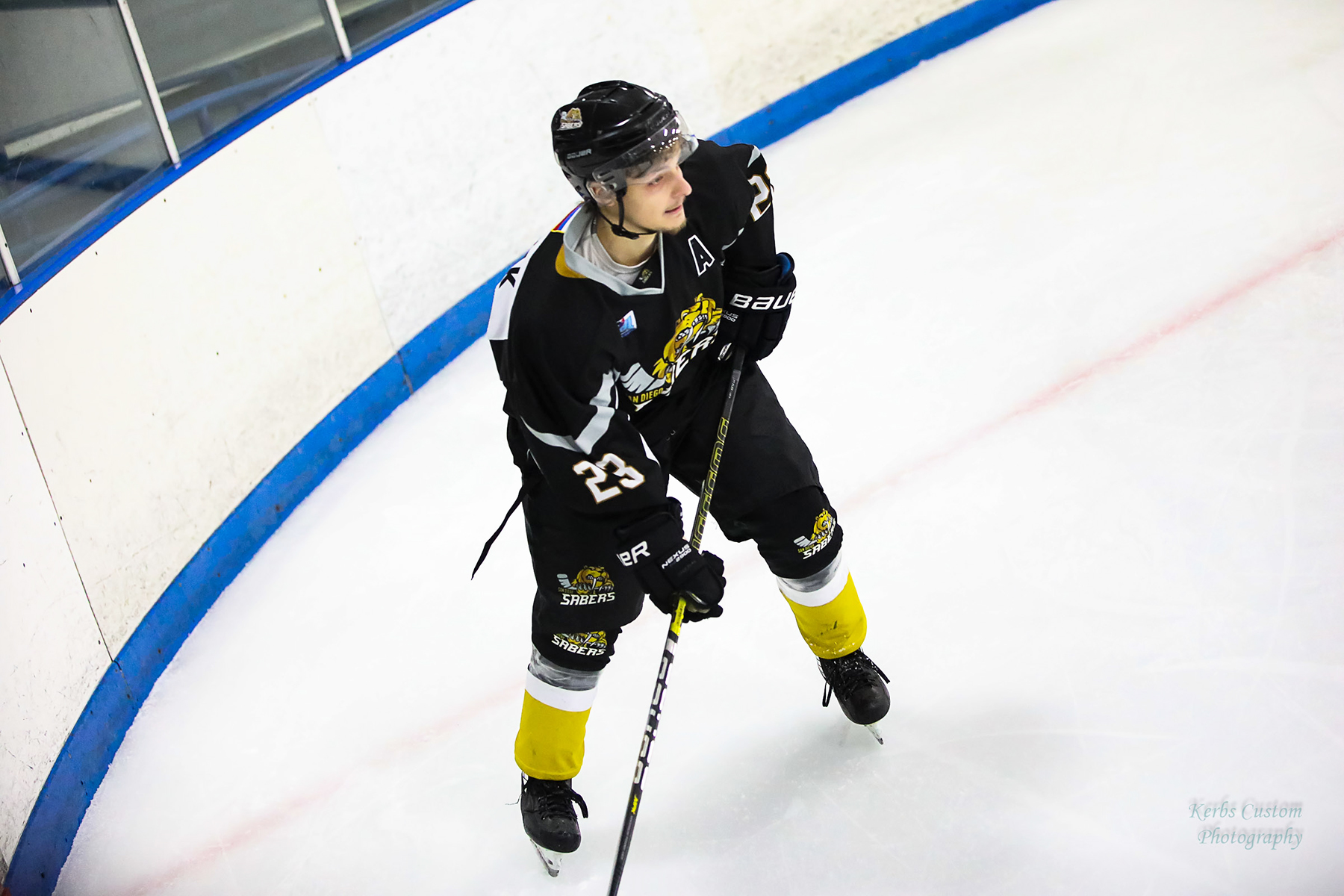 One response to “Sabers show grit against rampaging Mustangs”