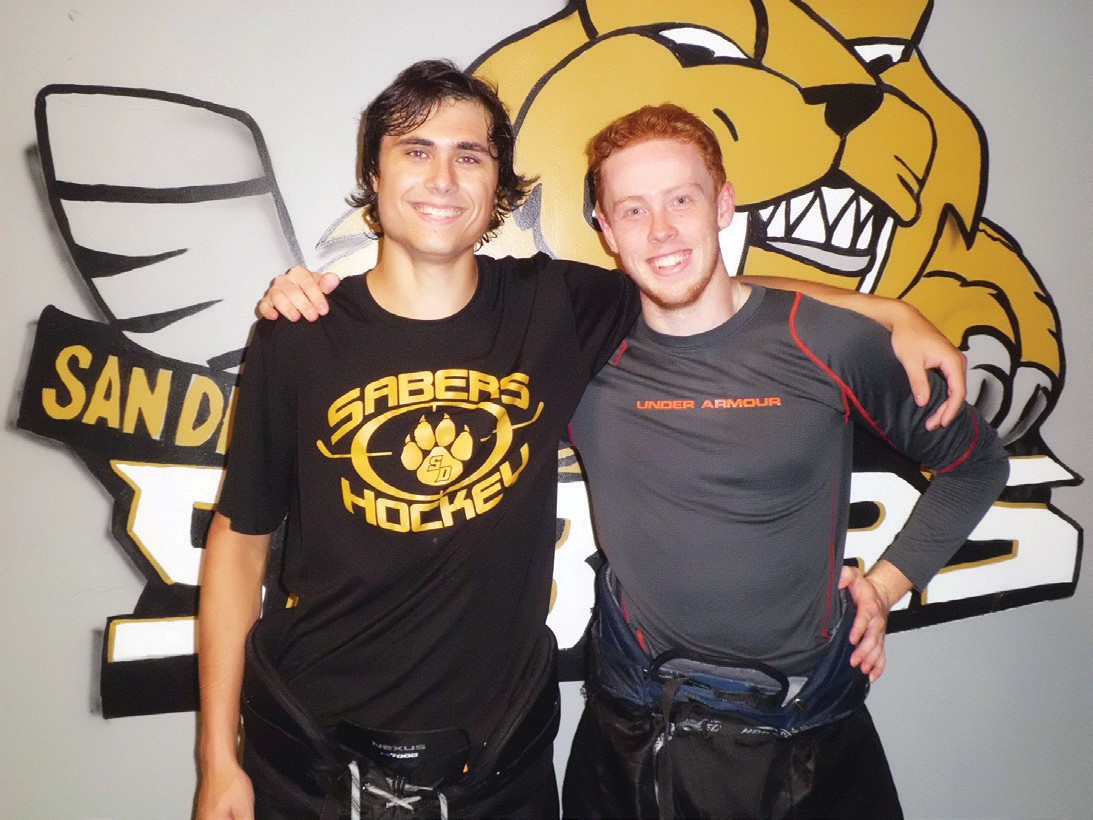 After a brisk start to their season, the San Diego Sabers had hit an undeniable rough patch. Coming into this past weekend’s three-game series with the visiting Fresno Monsters, the Sabers had dropped five straight games.

But a bit of context must be provided. Oh sure, losing is always a bummer but all of the aforementioned setbacks had come at the hands of Western States Hockey League titans El Paso and Long Beach, who have combined for a staggering 25-1 record thus far. That’s not to excuse the Sabers’ slippage but it does offer one reason why things might have suddenly gone south.

Nonetheless and regardless of how you viewed things, Coach Joakim Falt’s team was in real need of a turnaround, which meant getting back into the victory column as soon as possible. If the losing skein continued, it could have negatively impacted this young team’s psyche and had a damaging carryover effect as the season progressed.

But reflective of a club with heart, resiliency and belief, San Diego dramatically regained its footing as well as mojo with an impressive three-game sweep of the Monsters. By virtue of their weekend success, the Sabers upped their overall mark to 9-7-1, good for 19 points in the standings and sole possession of third place in the highly competitive Western Division.

Friday night it was Philip Larsson who ignited the Sabers’ 7-6 triumph with a clutch hat trick. On this occasion, the talented red-haired winger was also ably assisted by Messieurs Greg Houle and Mason Kohn, each of whom potted a pair of goals. And on the helper end, it was the smooth Mattias Eklund who stood out with three pivotal assists.

The goals kept right on coming a night later when SD stormed from behind for an 8-6 win that featured the physical Kevin Dumont going wild as he lit the lamp four times and finished with a total of six points. Obviously in a zone, Larsson continued on with his scintillating play with two more tallies while Eklund was once more the consummate enabler, pitching in with another three feeds.

So with two wins already in the bank, the Sabers were aggressively hunting the sweep and thanks in large part to a strong 23-save effort by netminder Matt Soldano, that’s exactly what they got with a 3-1 Sunday matinee victory. Houle and Dumont maintained their torrid pace by again piercing the net as did the lively Nurbek Baltayev, which accounted for all the scoring that the hosts would need.

Though it wasn’t until near the end of Sunday’s first period before anyone would get on the scoreboard, that didn’t mean there wasn’t plenty of action taking place.

Very early on young winger Kohn, who is a sweet skater and surprisingly tough on the forecheck, just missed on a wraparound. Dumont was active whether he was working a give-and-go, putting a wrister on net or unloading a heavy check along the boards. Houle showcased his deceptive moves and tenacity with a couple of stuff attempts from in close.

Captain Keegan O’Brien was flying up and down the ice, setting a tone with his hustling efforts that led to a pair of scoring chances. Eklund was masterful in the transition game whether he was jumping into the offensive zone or getting back to cover on defense. And forward Cooper Davis was a revelation, skating with purpose, delivering some hard hits and narrowly missing on a quick shot.

The Sabers were finally able to break through at the 1:22 mark while on the power play. Cycling the puck with good movement, the disc eventually came to defenseman Oskar Johansson, who was a force all afternoon long. The 5-10, 179-pounder wound up from the left point and blasted a shot along the ice that the well-positioned Baltayev was able to corral and deposit into the left side of the net past goalie Max Elmgren. The Sabers had gotten the all-important first goal and though no one knew it at the time, they would never relinquish the lead.

The second period was highlighted by the dynamite work turned in by the goalie Saldano. Fresno’s Cody Key, a 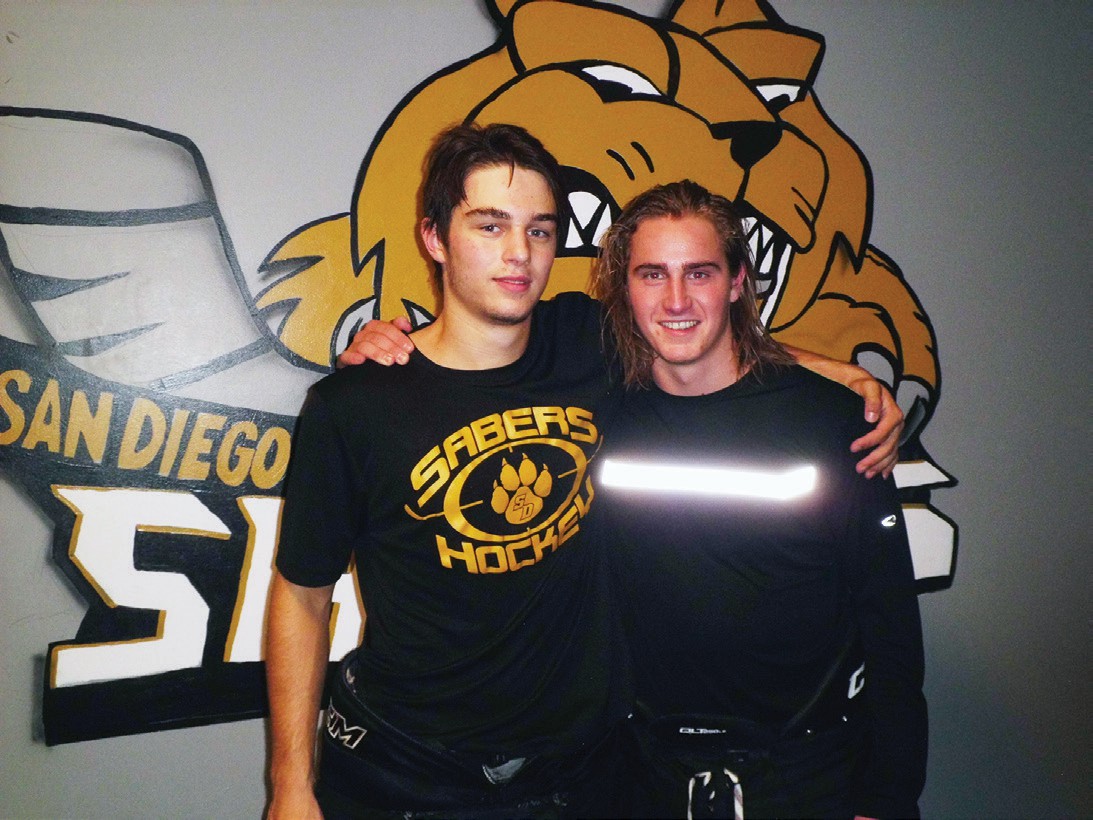 highly skilled and energetic player, was thrice blunted by Saldano. The first of these pivotal saves came on a testing 25-foot slapper that Saldano handled with aplomb. Later on, Key executed a daring rush only to have the Saber goalkeeper thwart him again by smothering a shot from in tight. And finally, the Fresno forward tried to go high on the Saldano but to no avail.

Others were also to feel the frustration of being shutdown and stoned. Monster Jacob Istre ripped a bullet that looked promising until Saldano got a piece of it. And then there was Dylan Ushkowski who penetrated in deep but was foiled when the Saldano went low and came up with a huge pad save.

With Saldano capably holding down the fort, the Sabers were about to expand on their margin. Nearly 11 minutes into the period, SD was again the beneficiary of a power play and the home team quickly capitalized on that advantage. Strategically, Houle maneuvered himself just off the left post. When he received a nice crossing pass, the 6-4, 185-pounder made no mistake, neatly roofing the puck past the defenseless Elmgren. Houle’s artful shot now had the Sabers up 2-0 and feeling pretty secure about their prospects.

But Fresno had been competitive and feisty all weekend long and they weren’t about to go away quietly. Barely three minutes after Houle had struck, the Monsters answered. Sent away with a perfect clearing pass from Key, the flashy Nakita Anistratenko used his speed to burst free and soon he was bearing in on Saldano with a breakaway. Anistratenko was almost poetic with the way he incorporated a devastating shake-and-bake move that had Saldano down on the ice and clearly out of position. The Fresno star completed this picturesque scoring play by merely flicking a backhand into a wide open net. With the score having narrowed to 2-1, the table was set for a tense final 20 minutes.

But with Saldano clearly on his game, the Sabers weren’t about to yield. First Saldano kicked out a ticketed shot by Mike Ballard. He then made amends by getting the best of Anistratenko on another dangerous rush. And finally, the 19-year-old backstop came up with another big save when he hugged the short side and denied Michael Dwyer on a partial breakaway.

The Sabers were at last able to get the cushion they needed at the 8:32 mark when Johansson drilled an ice-hugging shot that the opportunistic Dumont was able to retrieve and put home. From there, the Sabers continued to press the attack and thereby controlled a majority of the play for the balance of the contest. When the final horn sounded, the Sabers had secured the sweep and were encouraged, if not a bit relieved, to have recaptured their winning ways.

Though a host of Sabers made important contributions, it was Saldano, Dumont and Johansson who were selected as stars one, two and three of the game.

Bradley was one who felt it was absolutely imperative that the Sabers get back on a positive track. “It was pretty big to win these games,” the captain said. “Being a young team, we didn’t want to start falling in the standings because then we might get into trouble.” He then offered some additional insights: “We’d had some bad losses recently so we really needed to step up and kick things into gear. We had a very hard week of practice and I think that paid off. We were looking to make something positive happen. It was our plan to come away with six points against them (Fresno) and it was great that we were able to do just that.”

The Sabers’ funk lasted nine days and five games. But with the dispatching of Fresno, they appear to be out of it and back on the beam. Should they be able to replicate the mindset and physical commitment that they brought to bear against the Monsters, then the winning should continue but with such a young team, nothing is for certain. The next few weeks should be a tipoff on how this fascinating season will eventually shake out.