Sabers’ Neuenschwander is more than just a name 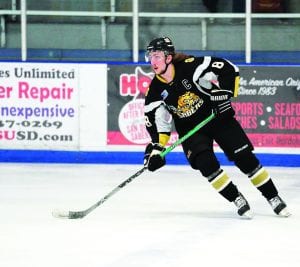 The Sabers’ captain Biko Neuenschwander is a rock-solid defenseman who packs some offensive punch as well.

The name is unique, distinctive and memorable. In many ways, so is the young man/hockey player attached to it.

Twenty-year-old Biko Neuenschwander makes a most favorable impression both on the ice and off. As a captain and stalwart defenseman of the San Diego Sabers, he is unquestionably one of the team’s top performers. His physical and determined presence manifests itself in any number of ways whenever he takes to the rink.

Away from the game, he is an affable and friendly sort, quick to smile and seemingly always there to assist someone whenever the opportunity arises. Talk to those who know him best and it seems as if lending a hand has become part of Neuenschwander’s persona. “I like to think of myself as a nice guy,” he says. “And helping out, whether it’s hockey-related or not just makes me feel like I’m doing my part.”

Growing up in Boise, Idaho, the versatile Neuenschwander participated in a variety of sports, including lacrosse, soccer, basketball, football as well as swimming.

His first exposure to hockey came when as a youngster he attended games of the ECHL’s Idaho Steelheads. Neuenschwander was sufficiently interested that when he asked his parents if he could take a crack at the sport, they gave him the go ahead. At Rocky Mountain High, he opted to concentrate on those pursuits that required a stick, namely lacrosse and puck.

Fast forward to now and it is hockey that has his undivided attention – and well it should because he has become quite accomplished at it. A committed player who has solid across-the-board skills in key areas – skating, stickhandling, shooting and checking – Neuenschwander is known for his reliability and steadiness. He is not likely to make mistakes.

As a defenseman, Neuenschwander prides himself on being assertive and keeping opponents to the outside. “I also like to throw the body around and let them know that I’m there,” he says, “especially in front of the net.”

Though throughout most of his career he has been more of a stay-at-home blueliner, Neuenschwander has stepped up his offensive game since joining that Sabers. Looking to rush the puck more and getting ample chances to compete on the power play, he has put up some good offensive numbers, scoring five goals to go along with 10 assists. “It’s been great being able to put the puck in the net more than I have in the past,” he says, noting that most of his tallies have occurred from down low, generally on quick shots coming off rebounds.

Paired exclusively with the gifted Karel Kankovsky on the back end, these two form the Sabers’ best and most versatile defensive unit. “His ability to do so many things makes my job a whole lot easier,” says Neuenschwander. “And I think we really complement one another. He likes to chase the puck into the corners more than me while I’m more conservative so we really work well together.”

As one of the five oldest players on a very young team, Neuenschwander felt an inherent need to lead. When he was given the responsibility of the club’s captaincy, that desire intensified all the more. Even-keeled and easy to approach, he has proven to be a trusted sounding board whenever any of his teammates have a personal or team issue to discuss.

When Neuenschwander talks about the Sabers efforts to date, which has seen the team post a 3-30-3 record, he insists on looking at the big picture. It was clearly understood that this was to be a foundational and building block season for San Diego, given its youth and relative inexperience in a Western States Hockey League that is loaded with plenty of seasoned teams.

“Though we haven’t won much, the guys have stayed positive and we’ve really progressed lately with the scores getting a lot closer,” he says. “This season has mostly been about developing the young guys and growing them as players so that in the future, they’ll be ready to make a mark either here with the Sabers or somewhere else. It’s been great being a part of that process and seeing how far they’ve come.”

As for his future, Neuenschwander is hopeful that hockey will remain a major part of it. Currently, he’s holding a scholarship offer from Lawrence Technical, a school in Michigan. Another path could see him going professional over in Germany where his San Diego coach Petr Kankovsky has contacts and has made inquiries on his behalf. Word has it that Kankovsky feels confident that Neuenschwander would prove himself if offered the chance to compete in Europe.

But if the hockey avenues shouldn’t pan out, then Neuenschwander plans on attending the Maritime Academy in the San Francisco Bay Area and learning, as he playfully says, “how to drive cruise ships.” By the end of summer, he should know in which direction his immediate life will be heading.

Asked how he likes to be thought of as a hockey player, Neuenschwander didn’t hesitate for a moment. “As a guy who puts his head down and gets things done,” he begins. “but most of all, as a player who has the drive to never quit.”

And when you watch Biko Neuenschwander compete, battle and hustle on the ice, that’s exactly what comes to mind. Besides the name, that is!