Sabers made huge strides during bounce back season 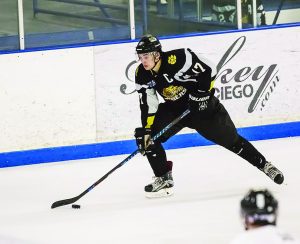 Keegan O’Brien provided the Sabers with both leadership and points.
Photos by Lenny Kerbs

From the depths of a meager nine-win campaign the season before, the 2016-17 San Diego Saber hockey team, based out of the local Escondido Iceoplex, definitely changed the trajectory of the franchise.

In just a few months time, the Sabers went from being somewhat toothless into becoming a committed, highly competitive and passionate hockey club that showed some real snarl.

With skilled and proven coach Joakim Falt and able assistant Ross Carmichael creating a totally different environment and bolstered by dramatically improved recruiting that brought in a wave of legitimate and exciting talent, the Sabers emerged from the ashes to produce a notable turnaround that saw them go a commendable 24-27-3 during the season, make the playoffs and lay a solid foundation for continued success into the foreseeable future.

“I’m really happy with the way we were able to get things headed in the right direction,” says Sabers’ Owner/GM Jim Cavataio who is completing his third year in that dual role. “We managed to get quality players who were better suited for the style of play we were looking for. And Coach (Falt) just did a great job of changing the culture.” 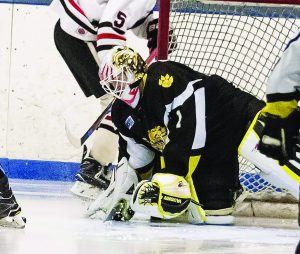 When he got the chance, goaltender Zach Hale generally delivered.

Participating in the Western States Hockey League, a Tier II Junior circuit that features players that range in age from 16 through 20, and placed in the ultra tough Western Division that is inhabited by such heavyweights as Long Beach, Valencia and Ontario, the Sabers hung tough all season long and came relatively close to finishing in fourth, which would have enabled them to host a first-round postseason series. And on their own home ice, where SD had clearly demonstrated it knew how to take care of business, the Sabers would have been a handful.

But by coming in sixth, the Sabers were required to travel up Interstate 15 to the Ontario Center Ice Arena for a postseason matchup against the formidable Avalanche. What made this best two-of-three series even more daunting was the fact that not only were the Sabers shorthanded because of injuries but regardless of how long it lasted, every game would be contested in Ontario’s house.

In the opener on March 17, despite getting goals from standout youngster Mason Kohn, Tatu Kunto and productive latecomer Stanley Skorulski III, SD was outscored 2 to 1 in each period and fell 6-3. Saber goaltender Alexander Johansson helped keep his team in the hunt by turning aside 41 of the 46 shots that were sent his way.

One night later, SD came out with a vengeance and coupling plenty of octane with discipline, and to the surprise of almost everyone in attendance, the Sabers seized a 3-1 advantage going into the final period. Suddenly, the prospect of the visitors forcing a third and deciding game loomed large.

However, the Avalanche obviously wanted no part of that prospect and went into an all-out attack mode, peppering Johansson with 20 shots, three of which eluded him. Ontario then added some cushion with an empty-netter that upped the final count to 5-3 which sadly, brought the Saber season to a close.

Even in defeat, there were a number of Sabers that shined. Kevin Dumont, Emanuel Guidon and Kohn each looked good while lighting the lamp while defenseman Mattias Eklund was stellar en route to doling out three assists. Swedish winger Philip Larsson was also an instrumental contributor with a pair of assists. And then there was Johansson again, standing tall and more than doing his share as he registered a hefty 45 saves. 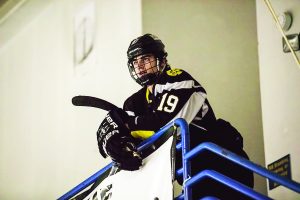 Newcomer and local product Mason Kohn played beyond his years while leading the Sabers in scoring with 49 points.

A brief look back at the season just concluded reveals that the Sabers made marked improvement primarily because the lineup was populated by gifted and dedicated players who were highly motivated to get the job done.

When it came to putting the puck in the net, the Sabers were blessed with an abundance of productive goal scorers led by the physical Dumont, who tallied 26 times—just one more than what Kohn delivered. The red-haired Larsson and hard-shooting defenseman Oskar Johansson were big factors with 18 goals apiece while tough winger Gregory Houle chipped in with a noteworthy 17.

Swiftly moving the puck and finding the open man was also another offensive strength as a remarkable six Sabers were credited with 22 assists or more. Setting the pace in this important category was the sublime Eklund who dished out 29 helpers. The creative Swiss Guidon was a delight to watch as he proceeded to record 25 assists while the versatile Kohn was next on the list with 24. Dumont, Larsson and admirable team captain Keegan O’Brien each totaled 22 feeds while O. Johansson added a helpful 21.

On the blue line, SD was anchored by the multi-dimensional Eklund and Johansson, both of whom could headman the puck, stickhandle with dexterity, jump up into the offensive zone and get physical when necessary. Others that were rock solid defenders who provided some needed offense included the imposing Liam Ritchie and veteran Steven Jackson.

Between the pipes, the Sabers were also very well served by a trio of backstops who more than made their presence felt. A. Johansson came aboard somewhat late in the year but he was a marvel the way he pushed aside high volumes of rubber in such an unflappable manner. Using his sizeable frame to great advantage, Johansson put up a commendable 3.83 GAA while posting a splendid .910 save percentage.

The netminder who did the most yeoman work in the crease was Matt Soldano, who was dependable and steady while cobbling together a team-high 10 wins. It shouldn’t be lost that Soldano was there to answer the call in 43 games, whether he was asked to start or came on in relief. More often than not, the Sabers knew that Soldano would give them a fighting chance.

Lastly, there was Zach Hale, another goalie who took advantage of his opportunities. With a nice 5-2 record, a notable 3.84 GAA and a confident mindset for a backup, Hale demonstrated that he could rise to the occasion. 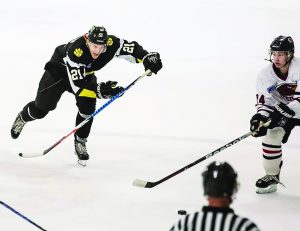 The forceful Kevin Dumont was SD’s top goal scorer with 26.

As far as next season is concerned, a change in personnel is always a foregone conclusion in the WSHL. Players either exceed the age limit, find a landing spot in the college ranks, transition into some sort of professional hockey or simply move on.

For example, Houle is already lined up to play at the collegiate level next season while the Johanssons, Oskar and Alexander, are ticketed to become pros in their native Sweden.

Because things will remain in flux until sometime in April when negotiations can be conducted and contracts signed, it’s impossible at present for GM Cavataio to hazard a guess as to exactly how many holdovers may be returning.

His best case scenario might have somewhere in the neighborhood of four to five players coming back to the fold. Ideally, if at all possible, he’d like to keep local talent such as the skilled Kohn onboard. One guy expected to be be wearing Saber colors again next September will be the promising netminder Hale. Cavataio is a big believer in building his team from the goal on out so knowing that he has Hale in his pocket gives him some reassurance that the resurgence of the franchise will continue.

Another extremely positive sign that the momentum generated by this year’s club will only escalate is that Falt is also scheduled for a return engagement. Falt’s influence on the changing of fortunes for SD can’t be minimized. A taskmaster at times and someone who demands attention to detail, Falt turned the team under his direction into a hustling, spirited and dedicated group that always brought bona fide effort. It was his vision that helped lift the Sabers out of the morass and back into relevance. Another year with him at the helm should spell even brighter days ahead.

Yes, this past season provided a great base from which to build.  Significant and monumental progression undoubtedly took place. But for Cavataio, hopefully this is just the start because he’s not going to be satisfied with just being competitive. He wants his team to become a real force and a potential contender. Thanks to his Sabers of 16-17, that journey is now underway.