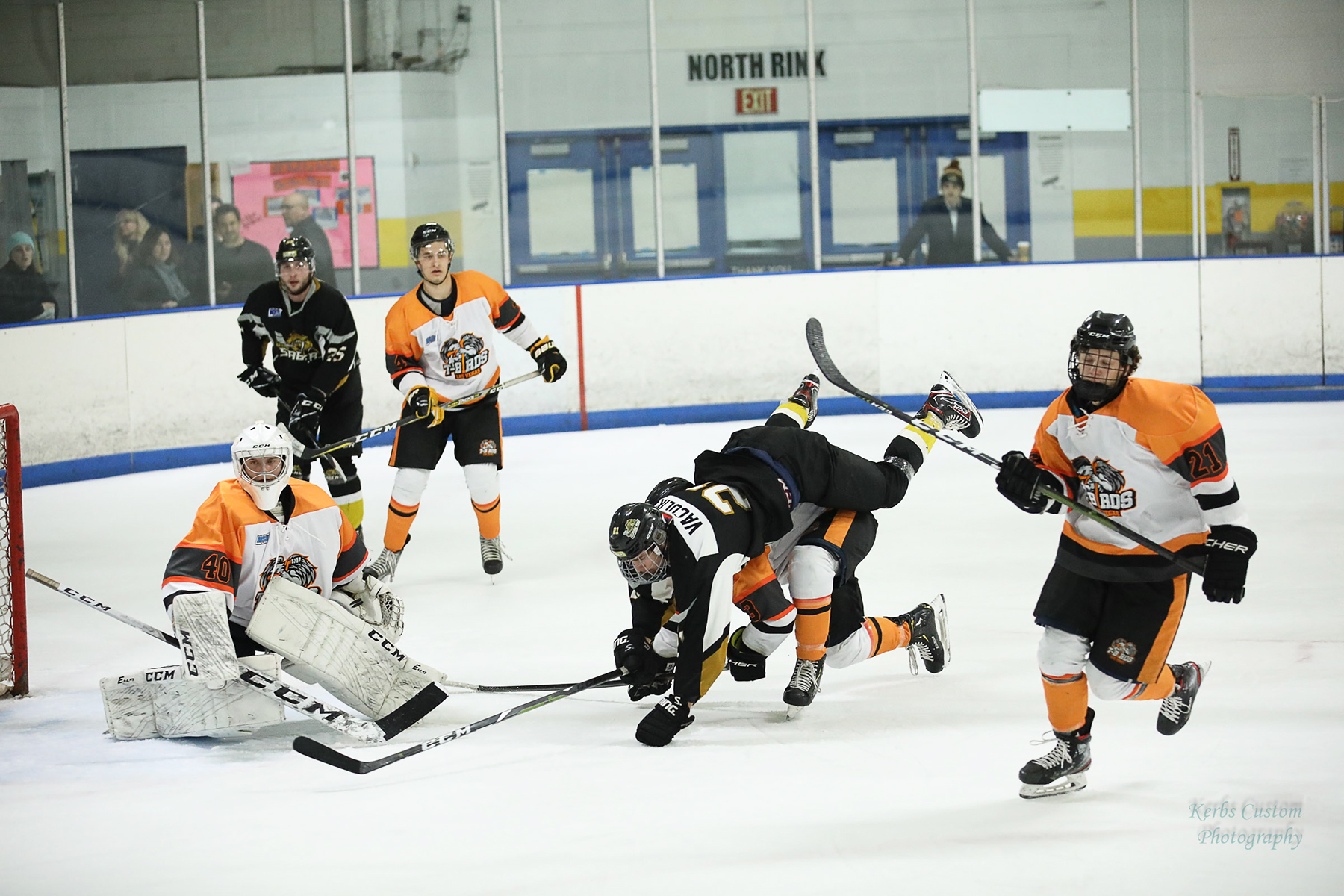 To say it has been an eventful past four months for the San Diego Sabers hockey club wouldn’t begin to tell the story.

The dramatic changes and the unforeseen circumstances that have loomed over the Sabers’ landscape have been nothing if not striking. Truthfully, it’s rather amazing that the Sabs haven’t been completely undone by the numerous challenges that have been unexpectedly thrust in their path. No one in the organization could have possibly anticipated the sort of game-changing upheaval that the team has been forced to undergo.

A bit of review is necessary to provide a proper context for all that has befallen the Sabers in recent weeks.

It all started in mid-March when San Diego (31-18-1-1), fresh off a noteworthy second-place regular-season finish in the Western Division of the Western States Hockey League (WSHL,) looked primed and ready to do some serious damage in the upcoming playoffs. Expertly guided by a talented coach in David Vychodil and armed with a bevy of hustling players like productive forwards Ondrej Vaculik, Trevor Wittkopf and defenseman deluxe Joel Rothman, the Sabers had clearly become one of league’s more interesting and dynamic teams.

But alas, the Escondido-based club’s promising postseason aspirations were absolutely stoned when COVID-19 began flexing its muscles and caused an abrupt cancellation to the WSHL’s entire playoff schedule. To say the least, it was a dispiriting way for such an upbeat season to end.

The next blow came when San Diego learned that the WSHL, of which the Sabers had been a long-standing member, was tapping out and shutting down for the 2020-21 season. Citing concerns such as mixing over 500 players (many with international backgrounds), significant economic pitfalls and the forecast of a coronavirus resurgence later in the year, the league’s Board of Governors voted in May to go dormant with an eye towards a return to play in ’21-22. This somewhat surprising turn temporarily left the Sabers out in the cold and scrambling to find another circuit in which to set up shop.

Fortunately, San Diego hit upon a solid spot to land when they, along with nine other new teams including former WSHL rivals Fresno and Las Vegas, joined the United States Premier Hockey League, a circuit that now has the largest footprint (teams in 24 of the lower 48 states) of any junior league in America. Credit the Sabers’ resourceful general manager Tomas Kapusta for finding a viable alternative to the WSHL and keeping his team engaged in a highly competitive environment. Kapusta had turned a potential disaster into a definite positive. As such, the Sabs still had a viable platform from which to perform and show their stuff.

But that dose of good news soon took a backseat to another huge negative that stung the franchise like a crushing body check. In a jolt of harsh reality, it was learned in late June that the Escondido Ice-Plex (the Sabers’ home rink) was ceasing operations. This was a devastating blow to skating and hockey communities throughout the County that had come to rely on the venerable venue as a go-to destination for just about anything ice-related.

In announcing the closure, the Ice-Plex owners revealed that the building had been bleeding money for some time because of antiquated refrigeration and HVAC systems that were beyond their lifespan and in dire need of replacement. Couple that with a complete loss of revenue due to a mandatory shutdown of the facility thanks to COVID-19 and a tipping point was reached. Though various options were explored to somehow keep the Ice-Plex afloat, none proved doable and the hard decision was made to bring the curtain down on what many had come to think of as an Escondido landmark.

Suddenly, the Sabers were without the rink and building that had been the only base of operations they had ever known. Consequently, as this is being written, no official word has been revealed as to where the Sabers might call home during the upcoming season. There are other local San Diego County venues to which the Sabs could conceivably turn but any guess at this stage would merely be idle speculation.

But one thing’s for sure, unless something akin to a Hail Mary miracle manifests itself almost immediately, the long-standing connection between the team and the city of Escondido has been forever severed. And that amounts to a sad and depressing end for both parties. Moreover, it’s a damn shame.

As far as where the Sabers go from here, who can say with any degree of certainty? Too many variables exist and everywhere across the entire spectrum of sports and at every level, fluidity and unpredictability are ruling the day. But according to new coach Domenick DiCicco, who was brought aboard in June to take over behind the bench, the Sabs have every intention of moving forward and carrying on. “We’re definitely fielding a team,” says DiCicco, “and we will for sure be playing somewhere in San Diego.”

DiCicco also indicates that as of now, training camp is still considered to be a go with workouts scheduled to commence in early September.

It remains to be seen if DiCicco’s expectations hold true and plans proceed as hoped but one fact is undeniable. The Sabers organization has endured profound changes that have significantly altered its destiny. From missing out on the playoffs, having to switch leagues and then enduring the loss of the Ice-Plex, it’s been an extremely disquieting time for a team that never could have envisioned such seismic shifts. And oh yeah, just to show that there is still change in the air, the team has recently named a new general manager in Trevor Karasiewicz with Kapusta now taking on the role of team president.

To say that the Sabers’ world has been substantially altered says it all because for the erstwhile Escondido club, things will never be the same.