Sabers gearing up for late-season push 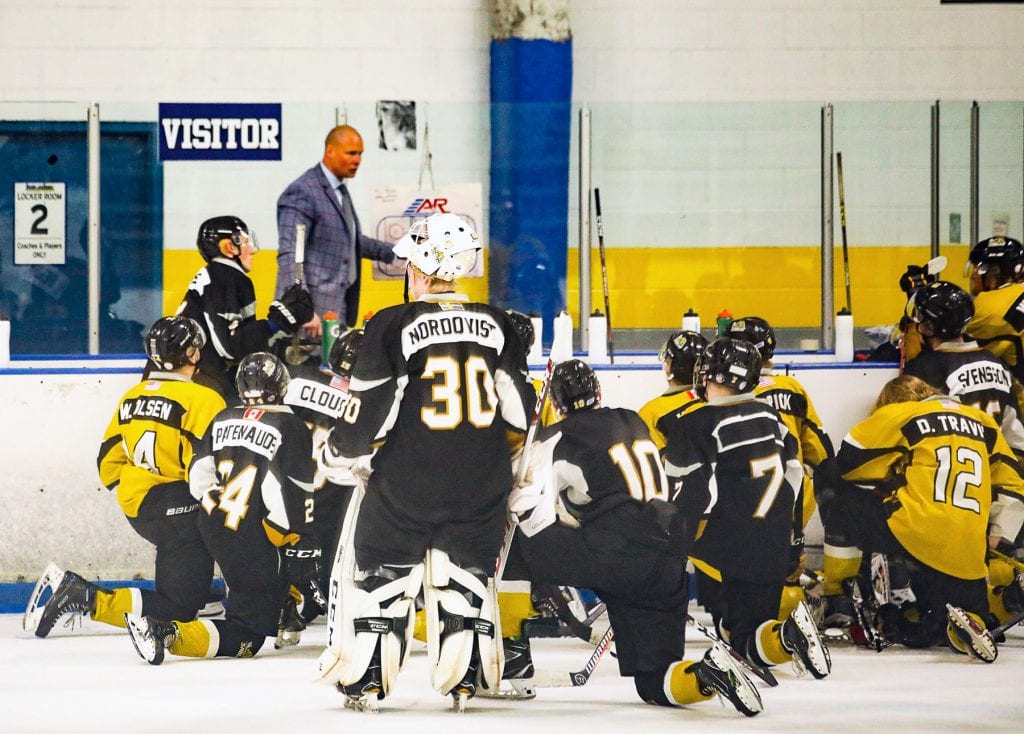 Based on their respective circumstances, it figured that the host San Diego Sabers hockey club wouldn’t have much trouble disposig of the Valencia Flyers during a two-game series this past Saturday and Sunday.

After all, the Sabers are an upper-echelon team in the Western States Hockey League while the Flyers have struggled mightily throughout the entirety of the 2019-20 campaign, with wins becoming as scarce as Donald Trump earning praise from CNN.

So it was no surprise when the Sabers chalked up their expected victories over challenged Valencia (3-39-2-2)—but what was unusual was how the last win was achieved.

Predictably, everything fell into place for the assertive Sabs on Saturday night when they routed the Flyers by a 10-0 count at the Escondido Ice-Plex. With seven Sabers lighting the lamp, the outcome was nothing if not a foregone conclusion. Defenseman Deniss Berdniks enjoyed a boffo evening, not only producing a hat trick but also chipping in with a pair of assists.

Czech newcomer Jakub Rusina also tormented the Flyers, scoring twice in his Saber debut. Others who loomed large on the scoresheet were gifted forward Samuel Kapusta (1G, 3A) and versatile defenseman Tor Svensson (3A). Also joining the statistical parade were Andrew Olsen, the dangerous Ondrej Vaculik, newbie Nikita Golovnya, Quinn Patenaude and slick Trevor Wittkopf, each of whom registered a two-point night.

In the meantime, SD’s youthful goaltender Mikulas Pluhacek saw a fair share of rubber but was able to repel all 31 shots directed his way while posting the shutout.

Obviously based on Saturday’s result, few if any envisioned the visitors being able to somehow steal a victory the following day. Predictably they didn’t but it was how the Flyers succumbed that was unexpected – they took the rare option of forfeiting. Citing safety concerns about the limited number of players that Valencia could actually put on the ice, both the team and the league agreed that the club should tap out and not run the risk of potentially depleting its roster even further. It was bizarre to say the least but in reality, even if healthy, the Flyers would have remained grounded versus the Sabers. The talent disparity between the two teams is breathtaking.

Credited with the two wins, the Sabers surged past Las Vegas and back into second place in the highly competitive Western Division with a 27-15-1-1 record and a total of 84 points. Moreover, one of the prime reasons the Sabers have experienced such a renaissance campaign under determined coach David Vychodil is that they have fashioned an outstanding 15-4-1 slate at the Ice-Plex.

Not wanting to waste the ice time that had been set aside for the cancelled game, Vychodil instead put his team through an intense 90-minute practice session. During the course of the workout that featured various drills and some scrimmaging, it became quite apparent why the Sabers have emerged as a bona fide force in the WSHL. Quick on their skates, precise with their passing, armed with enviable puck-handling skills, showcasing accurate shooting and obviously in terrific shape, the Sabs have a multitude of assets working for them. Thus, as the regular season winds down and the upcoming postseason beckons, San Diego hopes to make its revival take on even more impressive dimensions.

With division-leader Fresno (90 points) having all but secured a first-place finish, the immediate order of business for SD will be to lock down the second spot and thereby earn home-ice advantage in the first round of the playoffs. “It’s very important that we get that done,” says Vychodil, who knows full well the value of playing at your own rink, particularly when the stakes are at their highest.

To do so, the Sabers will need to take care of business this Friday and Saturday night when they host the tough Las Vegas Thunderbirds (83 points), the club that is pressing the locals in the standings. At the very least, the Sabs must split with the T-Birds if they hope to maintain their current edge over the contingent from Vegas. Anything less and SD will find itself in a dicey situation, especially since the Sabs wrap up the season with a three-game road trip against the formidable El Paso Rhinos who have already won 40 games and are virtually unbeatable (20-1-1) at home. “The schedule isn’t exactly in our favor having to play El Paso at the end,” admits Vychodil.

But the coach likes the mix and composition of his squad to compete with anyone, especially with the recent additions of potentially dynamic players like the aforementioned Rusina and Golovnya. In addition, gifted blueliner Bradyn Barone will return shortly from an injury and his presence figures to provide the Sabers with a huge boost.

Though this has been a season with plenty of highs and lots of upside, Vychodil nonetheless regrets that the Sabs frittered away a glorious chance to be division kingpins. Early in February, SD traveled to Fresno with first place there to be had. But alas, the Sabs sputtered in the San Joaquin Valley and lost thrice by scores of 4-1, 5-1 and 5-2. As a result, the Monsters haven’t been headed since. “We failed up there,” Vychodil candidly shares. “We had been winning quite a few games before that and the boys got happy with themselves,” says Vychodil. “They didn’t work as hard as they should have and because of that we weren’t sharp.”

However, even amidst that keen disappointment, the Sabers learned an invaluable lesson. Though they have legitimate and conspicuous talent, they are not a team that can afford to get lax in any way. For SD to succeed and reach its max, the effort must be continual, from shift-to-shift and game-to-game. Any sense of let up or complacency just won’t do. After the beatdown in Fresno, the Sabs now know their effort and hustle must be constant and unwavering if they are to accomplish something special.

And you can rest assured that the demanding Vychodil won’t let them forget that reality as the playoffs loom.